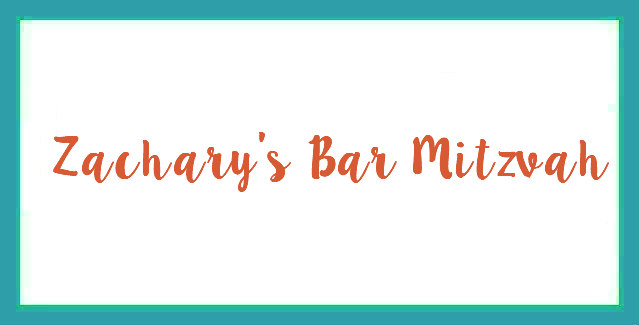 Zachary’s bar mitzvah was scheduled for his 13th birthday according to the Jewish calendar and fell on this past Saturday. This was the day we had planned to have his bar mitzvah and he started his preparations for it before everything shut down for the pandemic. Coincidentally, the rabbi he was learning with moved out of town after they started studying together and therefore they had to learn online – and even if he hadn’t moved, that would have happened! For a long time, we didn’t know what would happen with our plans. Could our family come? Would we postpone the bar mitzvah? Would everything be normal again by now? 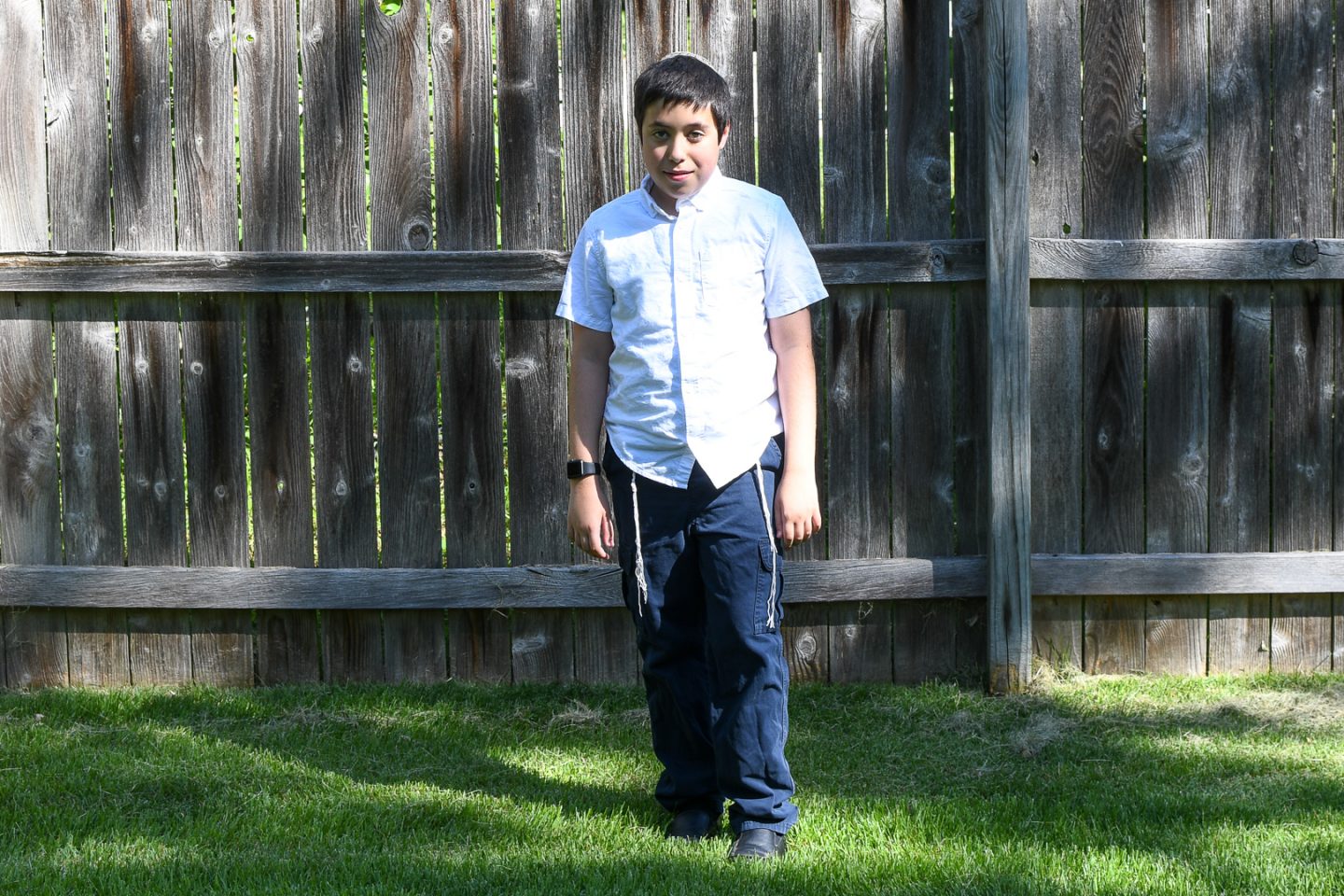 In the end, we decided to do a Virtual Bar Mitzvah via Zoom, and two weeks ago we found out that we would be able to have Zachary read his haftorah (a selection from the book of prophets that is read each week) and lead the part of the service he had prepared at an outside service at our synagogue. So he did his speech on Zoom, plus he had some close friends and synagogue members there for him to do the actual bar mitzvah on his Hebrew birthday. We didn’t have a party or any family there, but there were so many people on the Zoom call that wouldn’t have come into town for it so that turned out very nice. 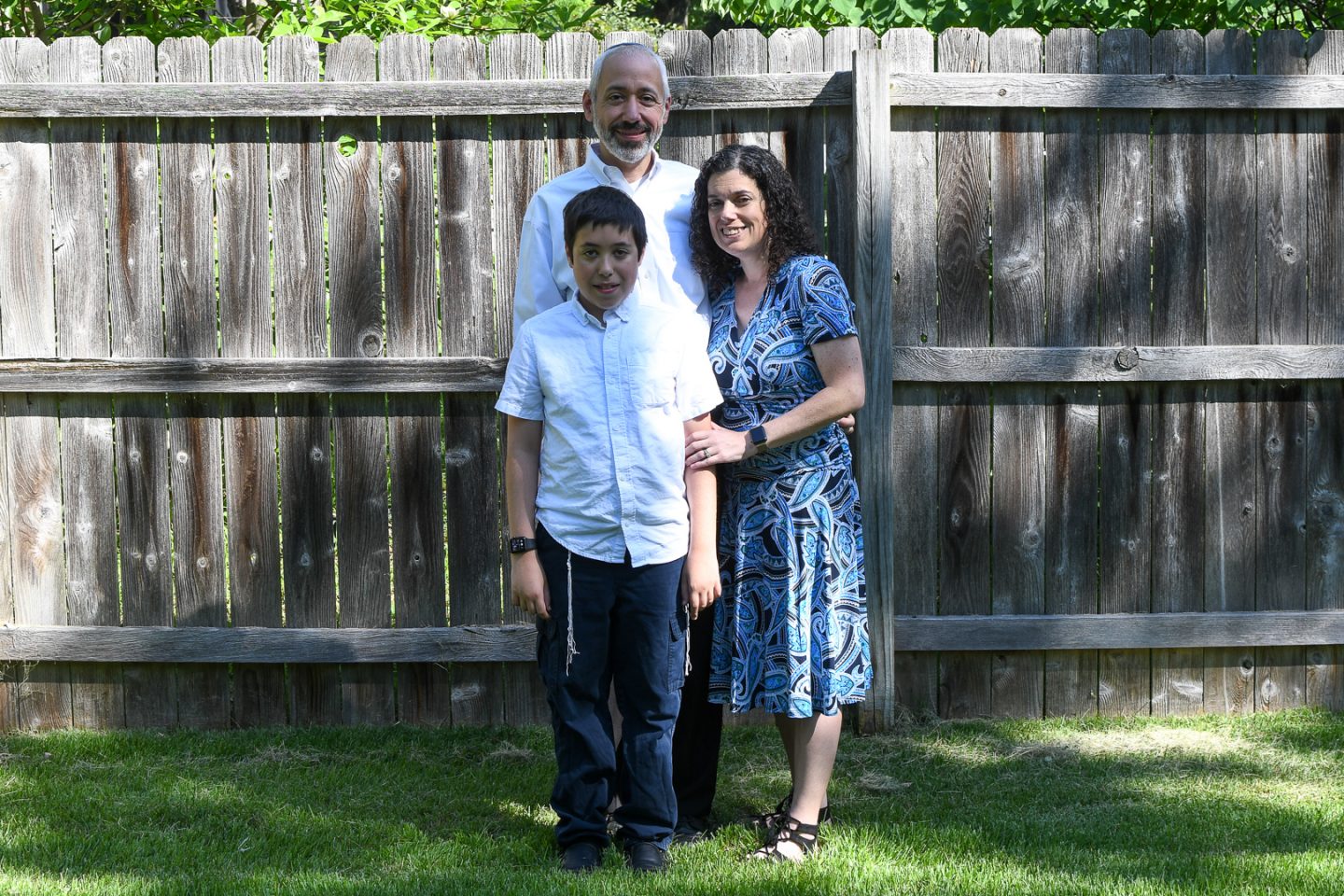 On the Zoom, I started out saying the following:

This isn’t quite the way we expected to celebrate Zachary’s bar mitzvah, but Zachary has never done things as expected. He was born two weeks early, he didn’t talk until he was two, he’s left handed, and he’s one of the pickiest eaters I’ve ever met. Yet, Zachary is well-known by his teachers and classmates as a technology expert, so it only makes sense for him to have his bar mitzvah on zoom. While he will be reading his haftorah tomorrow as planned, he’ll be sharing his d’var torah here with you now.

When Zachary was born, we couldn’t decide what to name him. I joked at his bris that we’d gone through our name book over and over and finally stopped when we got to Z names again. As it turns out, what we didn’t realize is that Zachary’s haftorah actually comes from the book of Zachariah. Zachariah the prophet tells us we should execute true justice and deal loyally and compassionately with one another.

I said: Zachary has a very strong sense of justice and we often hear about whether or not things are fair. He has recently decided that he should be a lawyer when he is older and this seems to be a fitting career choice for him. Zachary may have started talking late, but now, if you get him on a topic he’s interested in, it’s hard to get him to stop. He is great at class participation and his teachers have called him creative, an out of the box thinker, eager to learn, always willing to help, a role model, and a mensch.

Dave said: While we wouldn’t necessarily describe Zachary as easy going, he adjusted surprisingly well to online learning. Zachary started learning for his bar mitzvah with Rabbi M just before the M family moved to St. Louis. Zachary made the switch to learning with Rabbi M from a distance before distance learning was cool. We are so proud of Zachary for persevering with his studies and bar mitzvah preparations through this challenging time.

Gabbie said: Zachary is so sweet and cuddly and he won’t go to bed on Friday nights before he hugs all of us.

Simon said: Even though I fight with Zachary sometimes, he really is a great brother. Just the other day, the ice cream truck came when Zachary was outside and he bought ice cream for me. 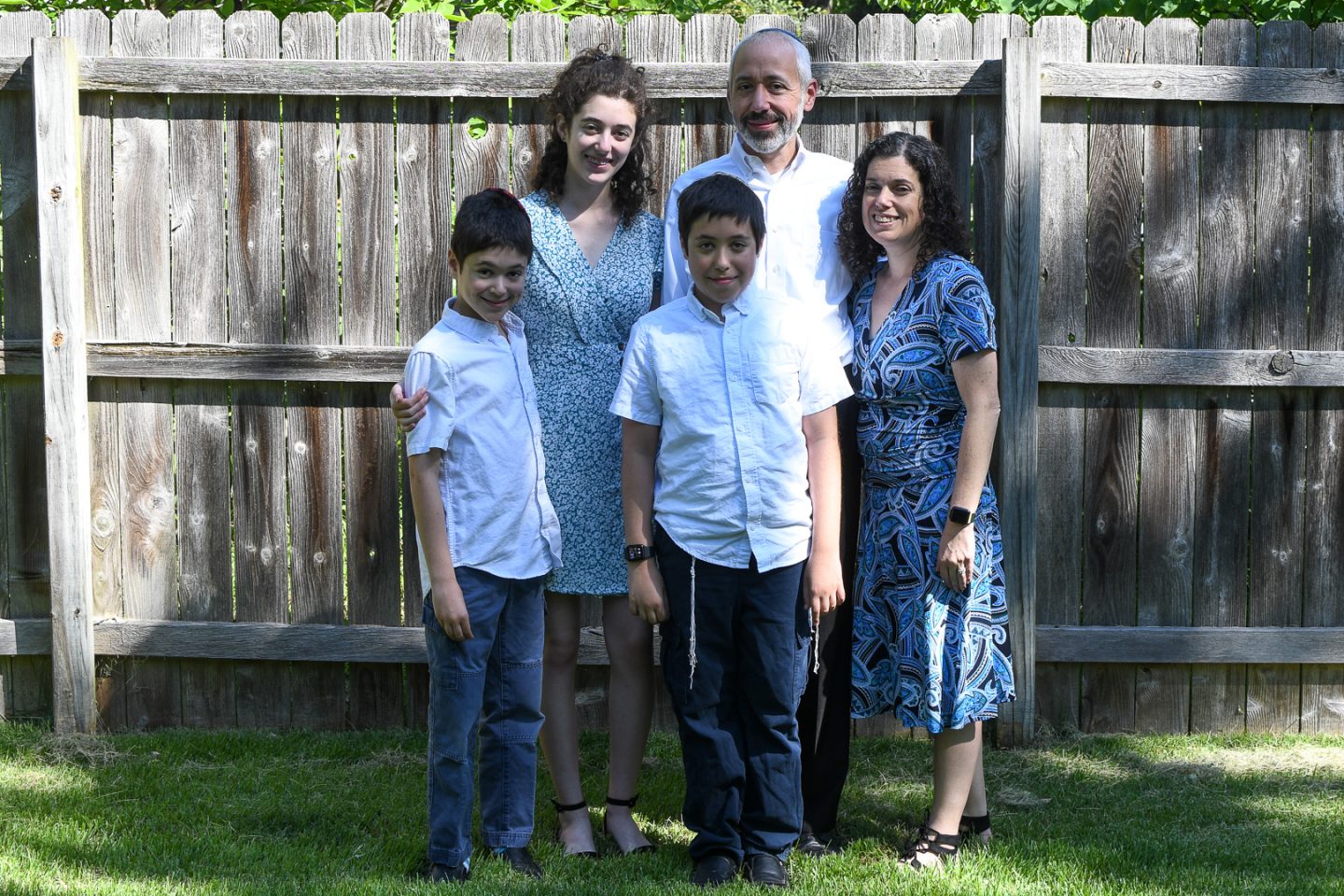 Next, we played a slideshow with pictures of Zachary and various friends and family members throughout his life. The slideshow was 15 minutes long. Then we opened the floor (so to speak) for people to give greetings. Almost all our family members spoke including Dave’s parents, my parents, my brother, Dave’s sisters, Dave’s nieces, Dave’s uncles, and Dave’s cousins, plus two of our good friends. These people were located in so many places, from NJ to CA to Atlanta to Israel. It was kind of amazing!

We took these pictures using my tripod and remote, and I think they came out pretty well. 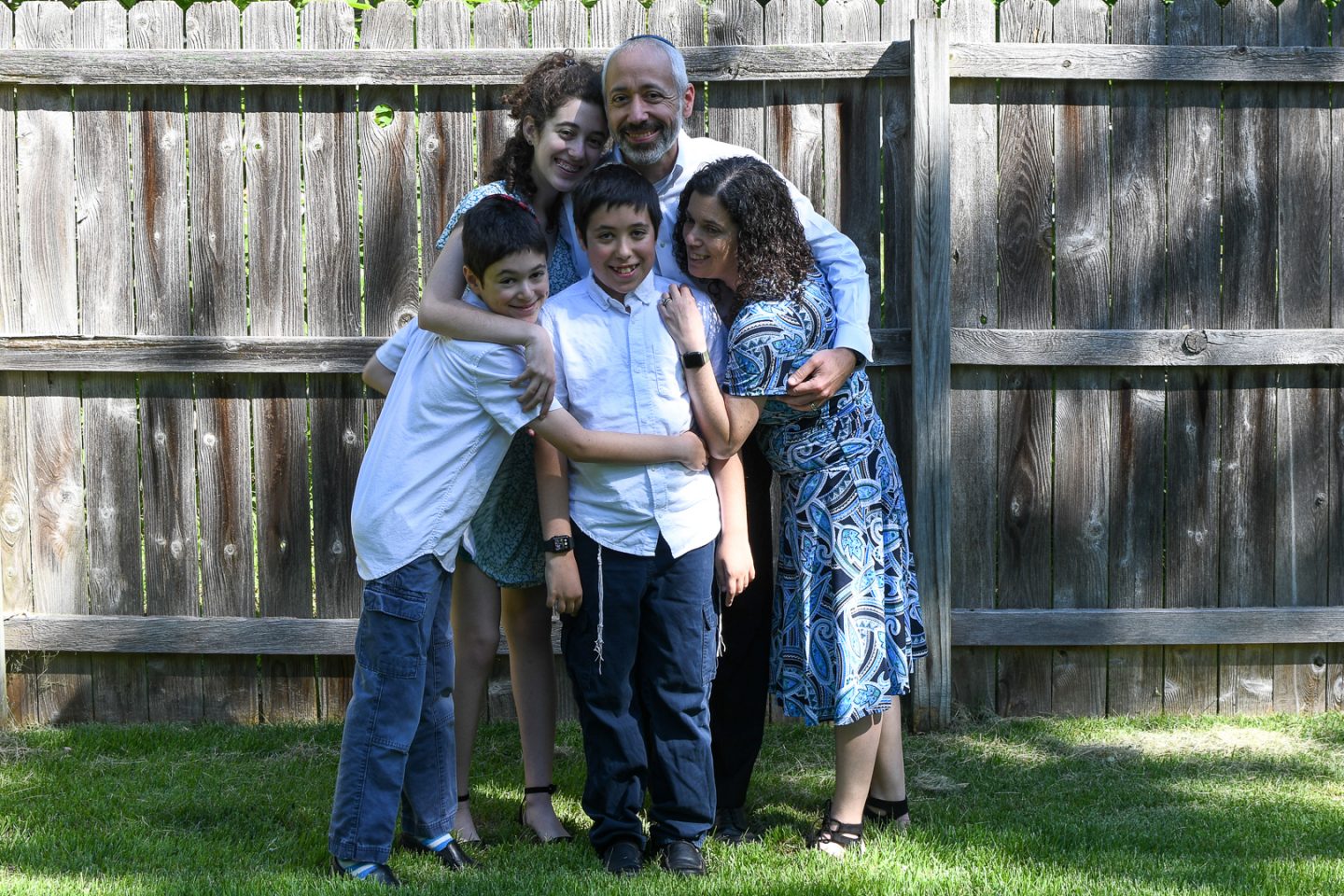 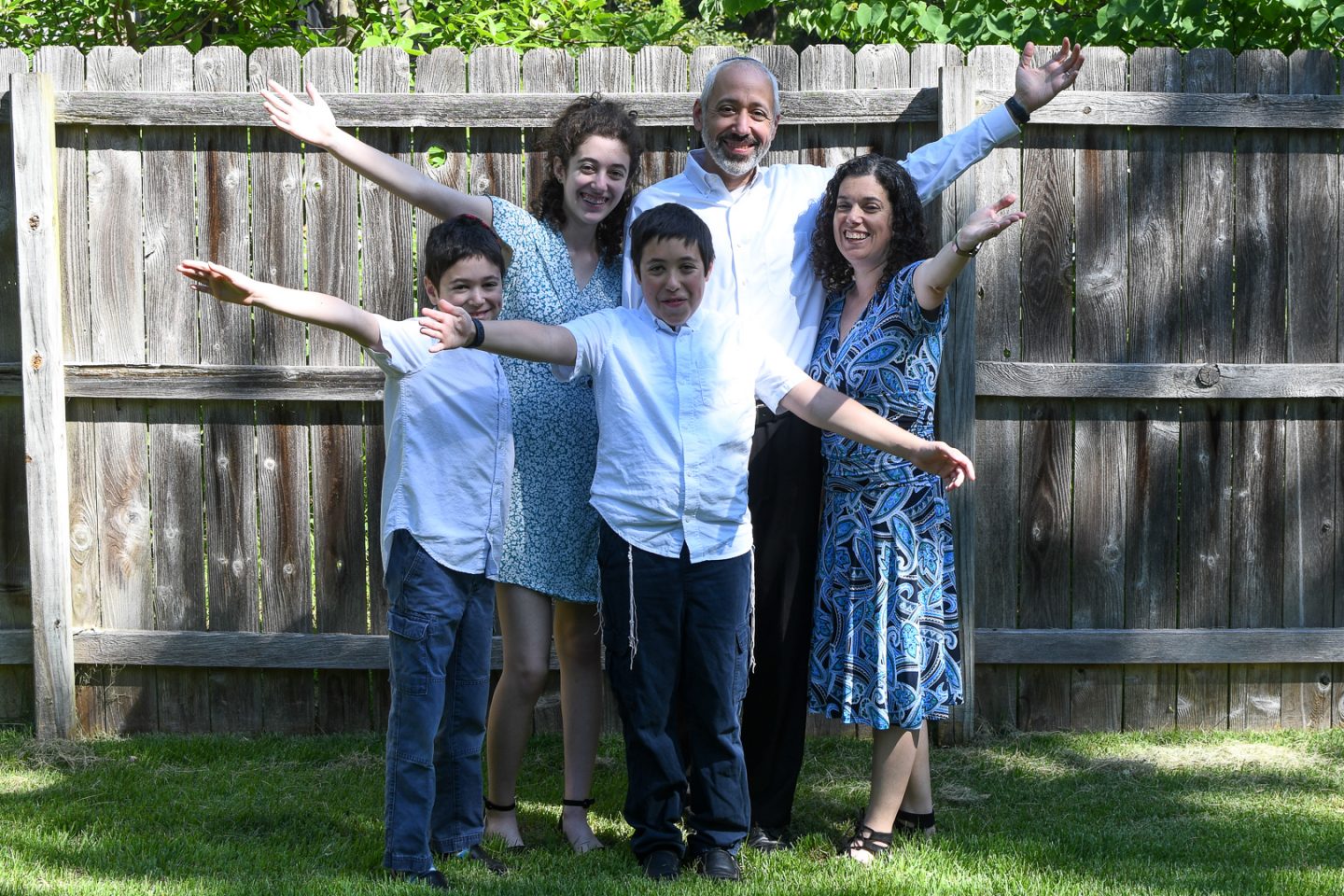 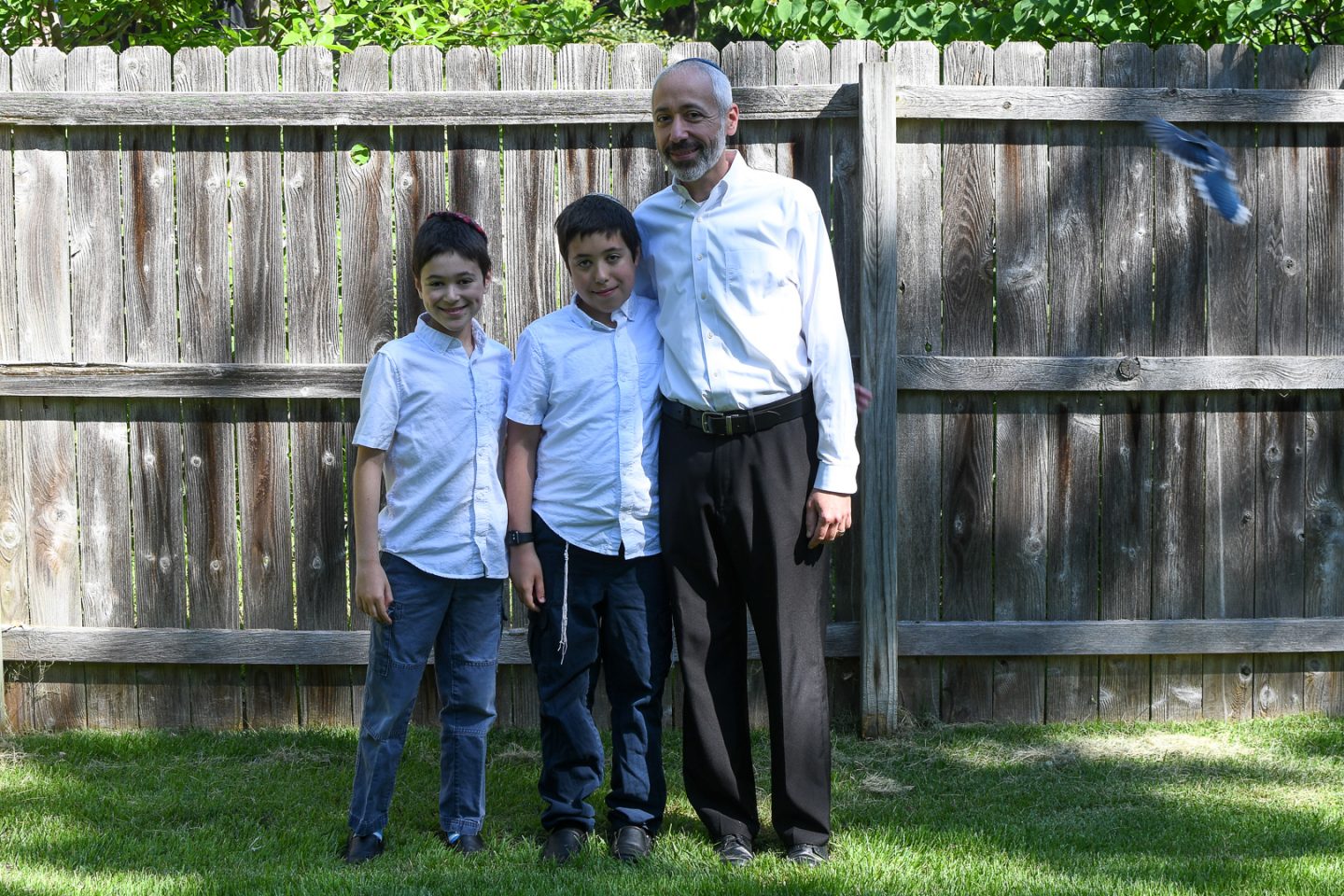 See the bluejay that flew right into the picture?? 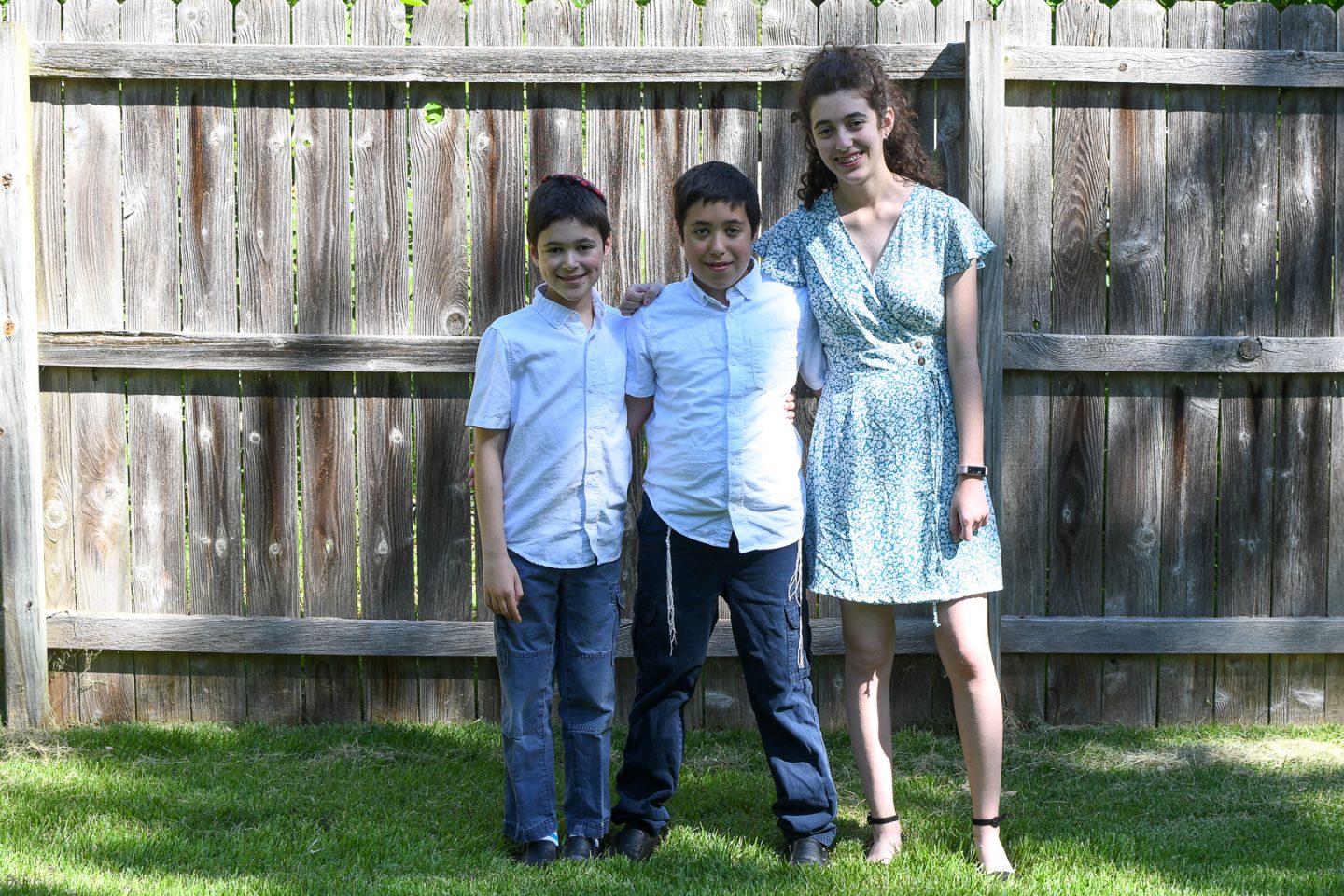 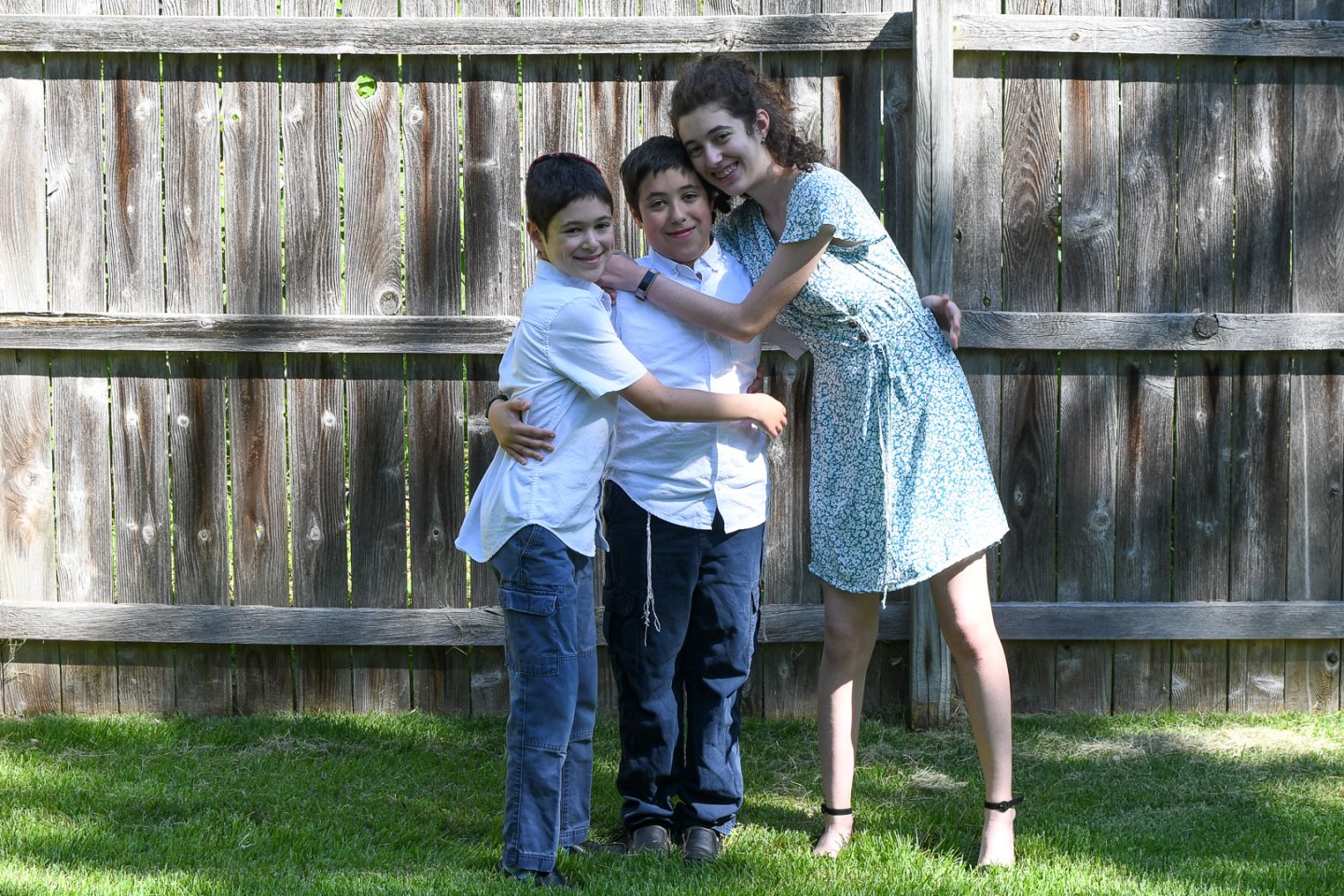 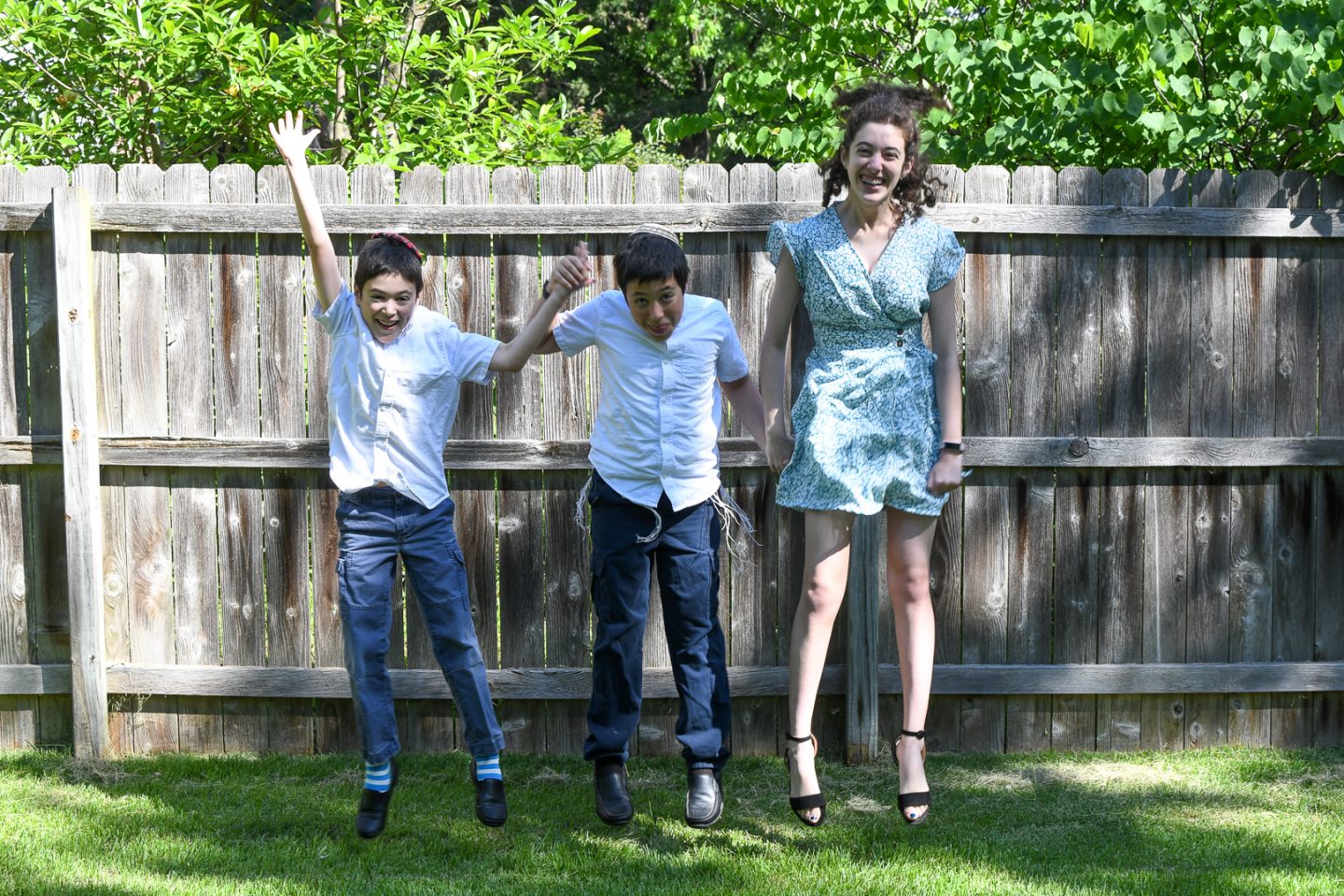 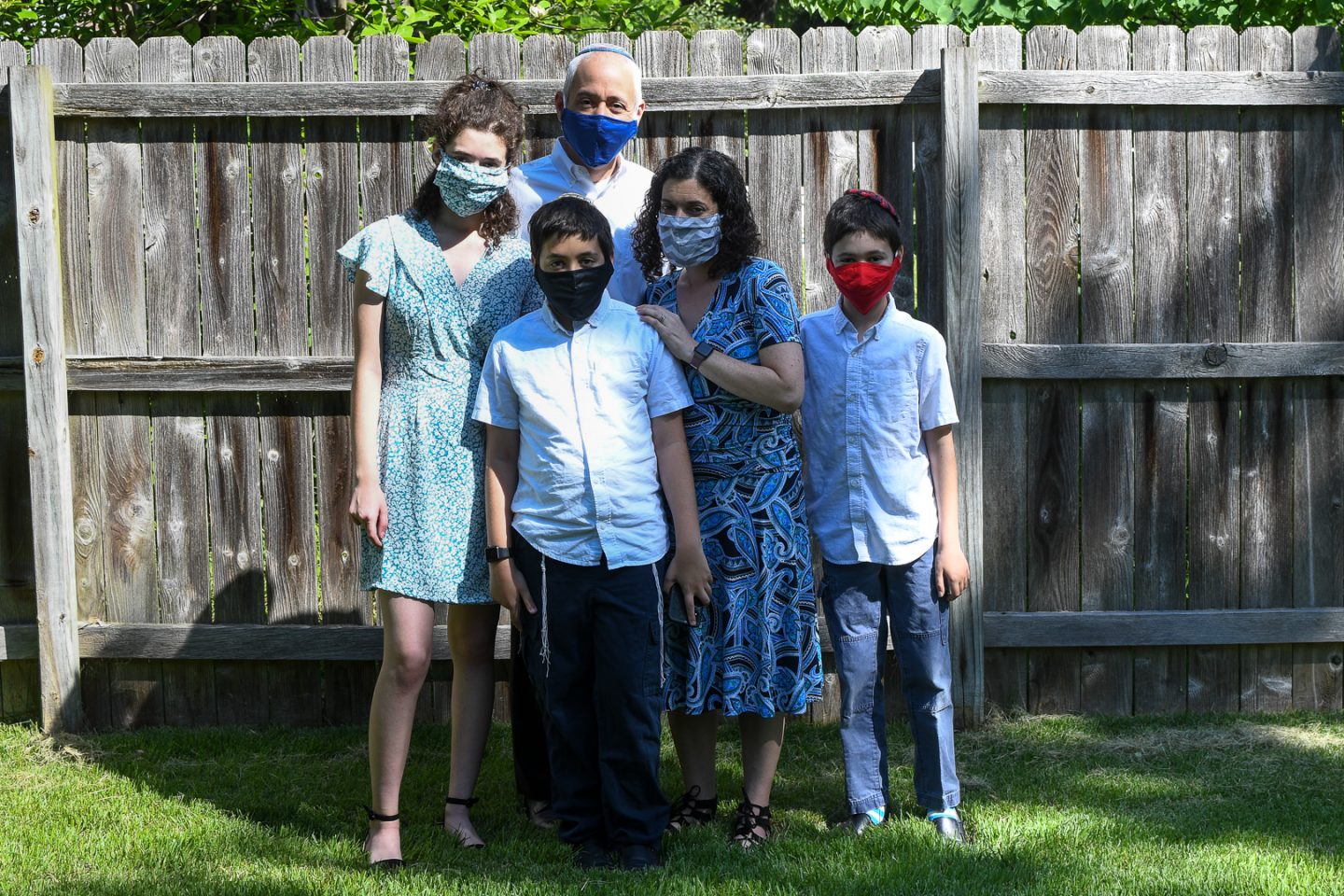 For our service at synagogue, we were required to wear masks. (Mostly everyone followed this requirement. I feel like if you can’t follow the rules you shouldn’t be there, but I digress). The boys are wearing masks from Costco – we found a three pack for $10 and they’re pretty nice! Gabbie shortened her dress and used the extra fabric to make her mask. She got a lot of compliments on it!

We had planned to have our friend who is a caterer cater our meals for the bar mitzvah and back in March I told her she might end up just cooking for us. Well, that’s what happened! 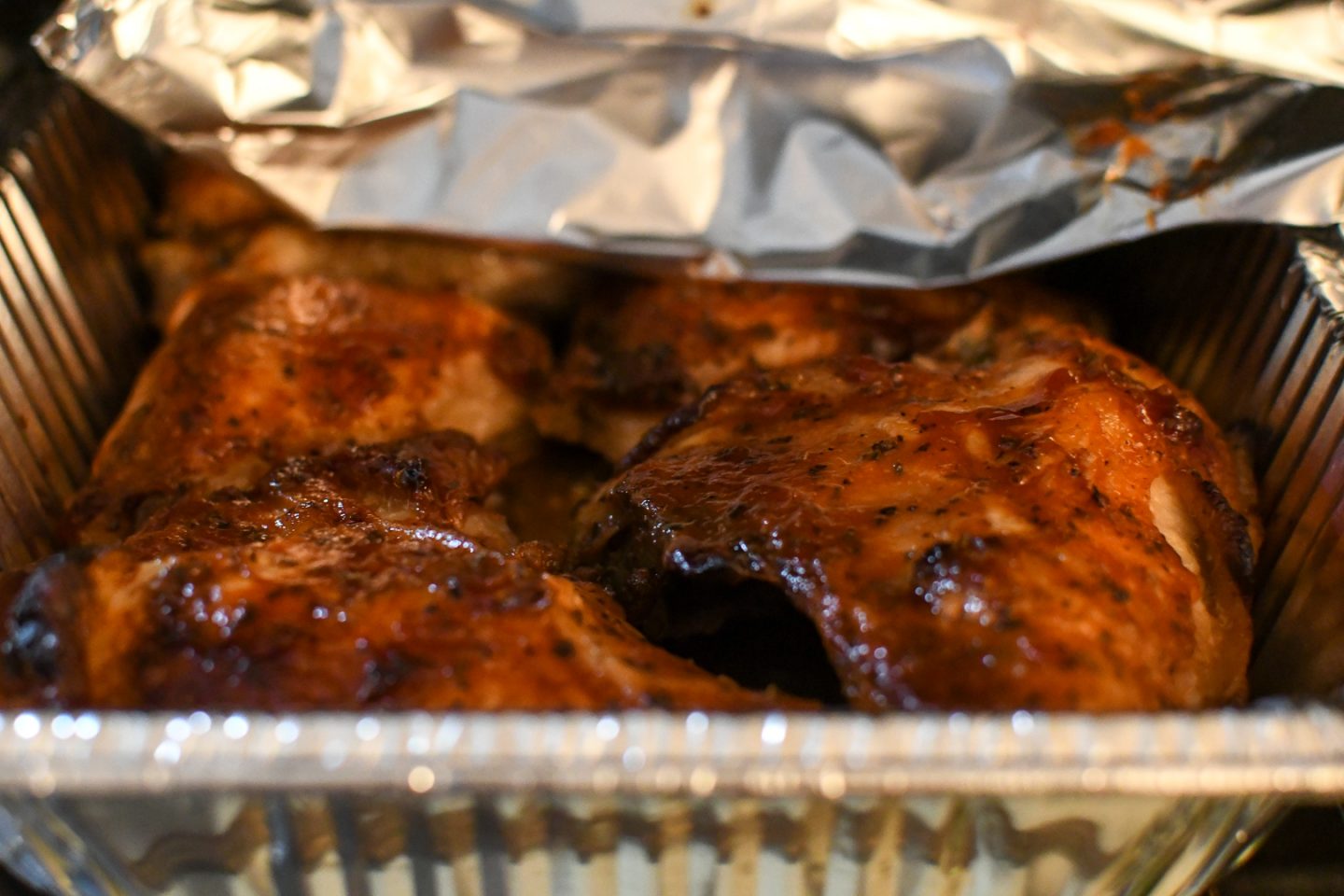 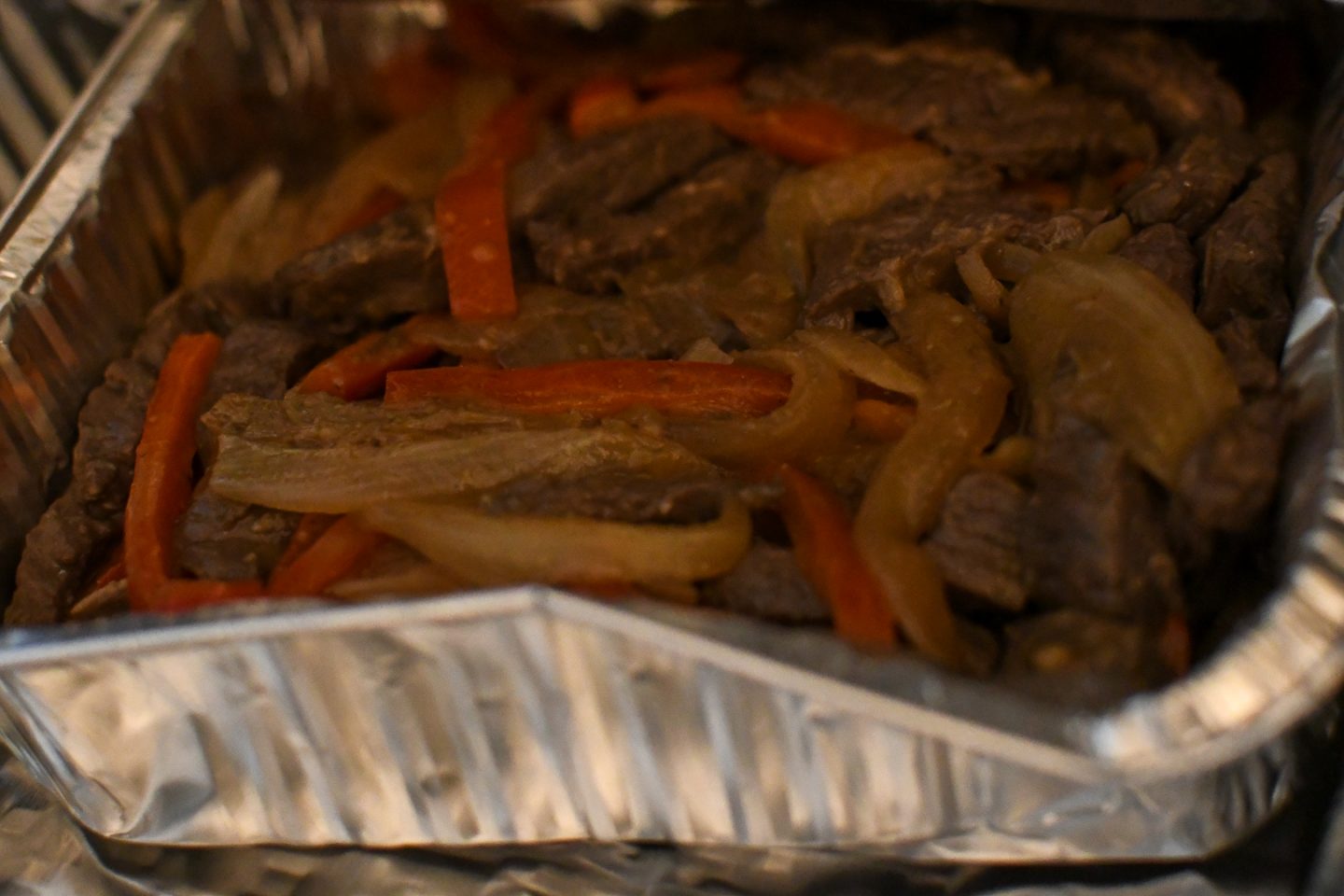 Steak that went on top of salad 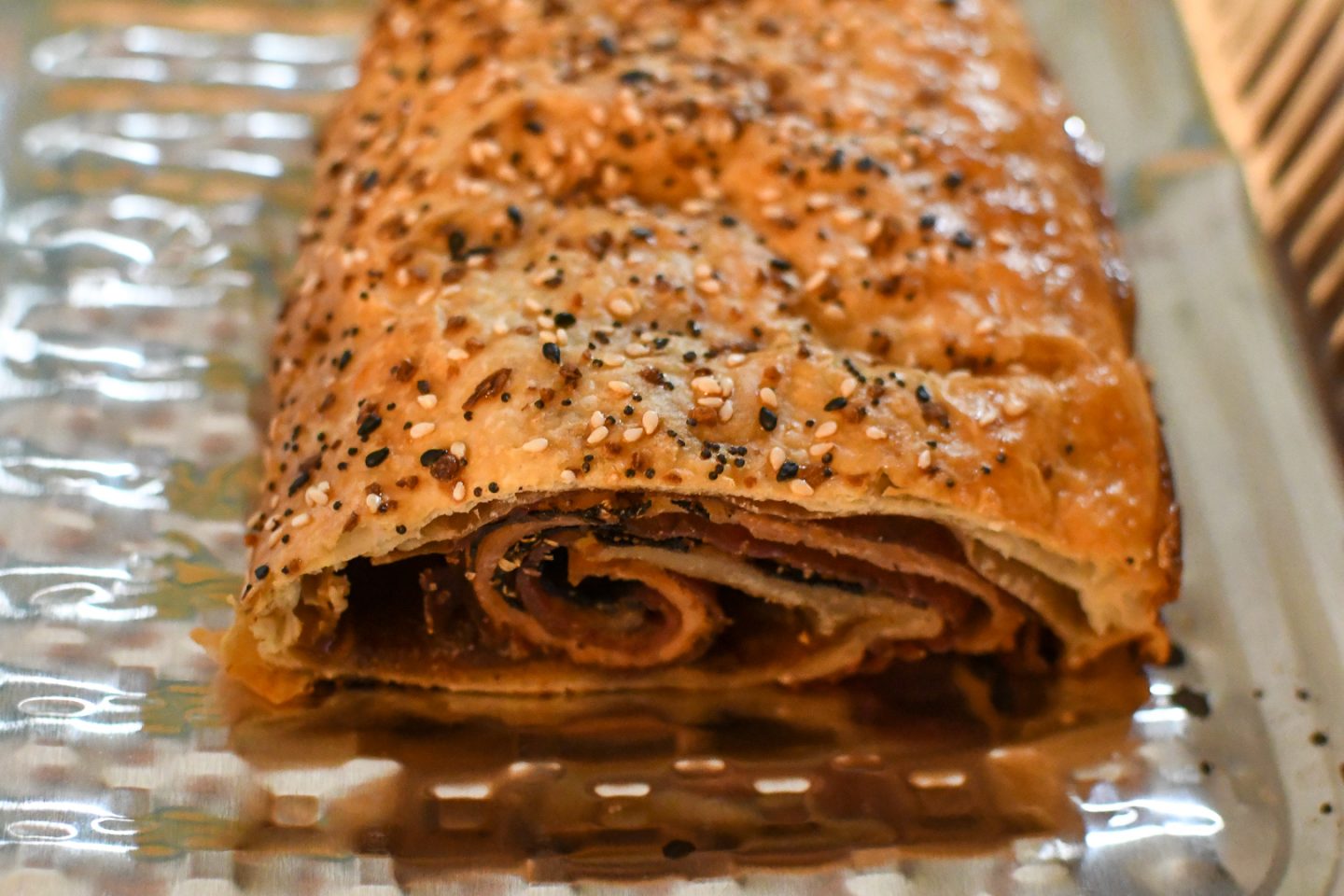 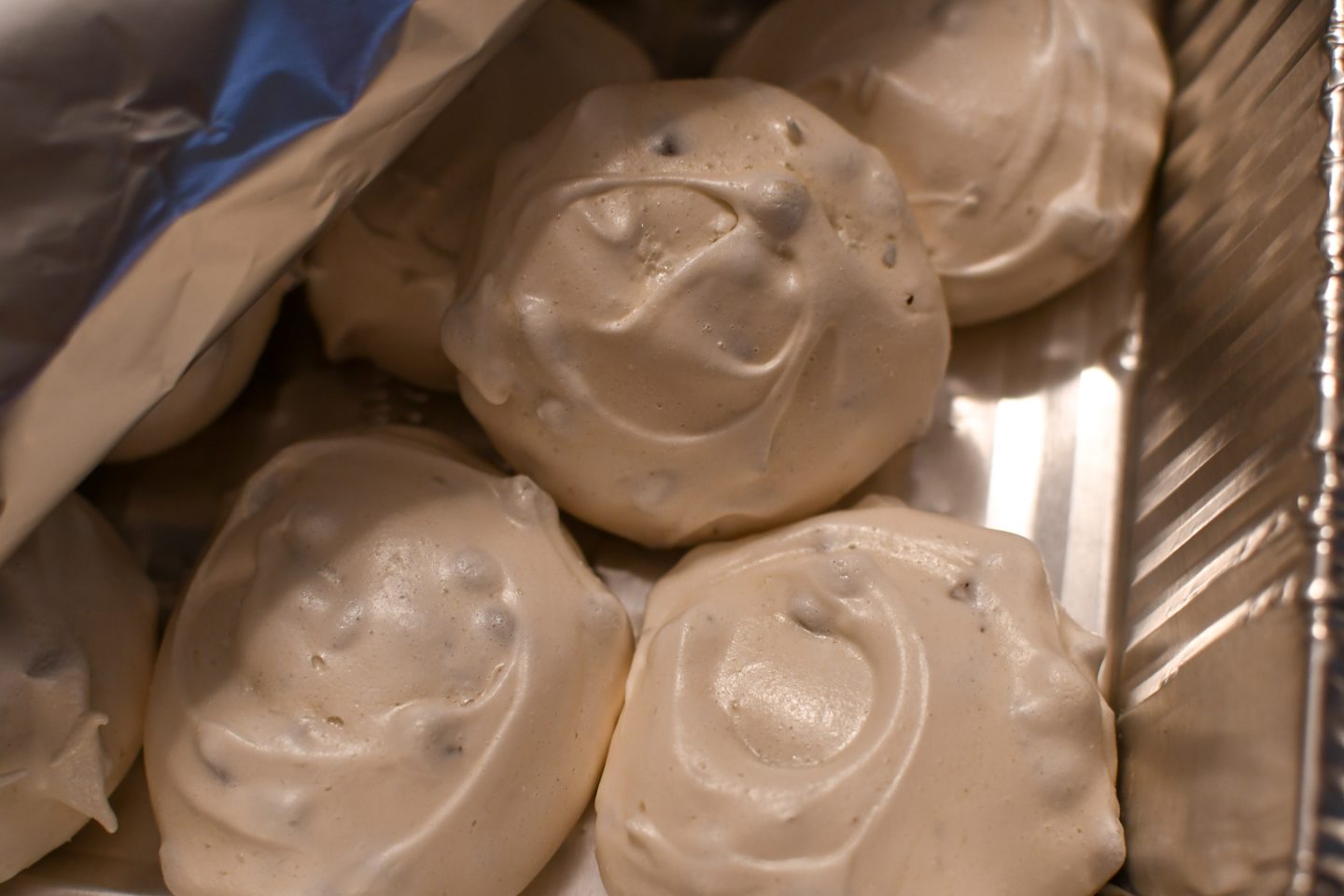 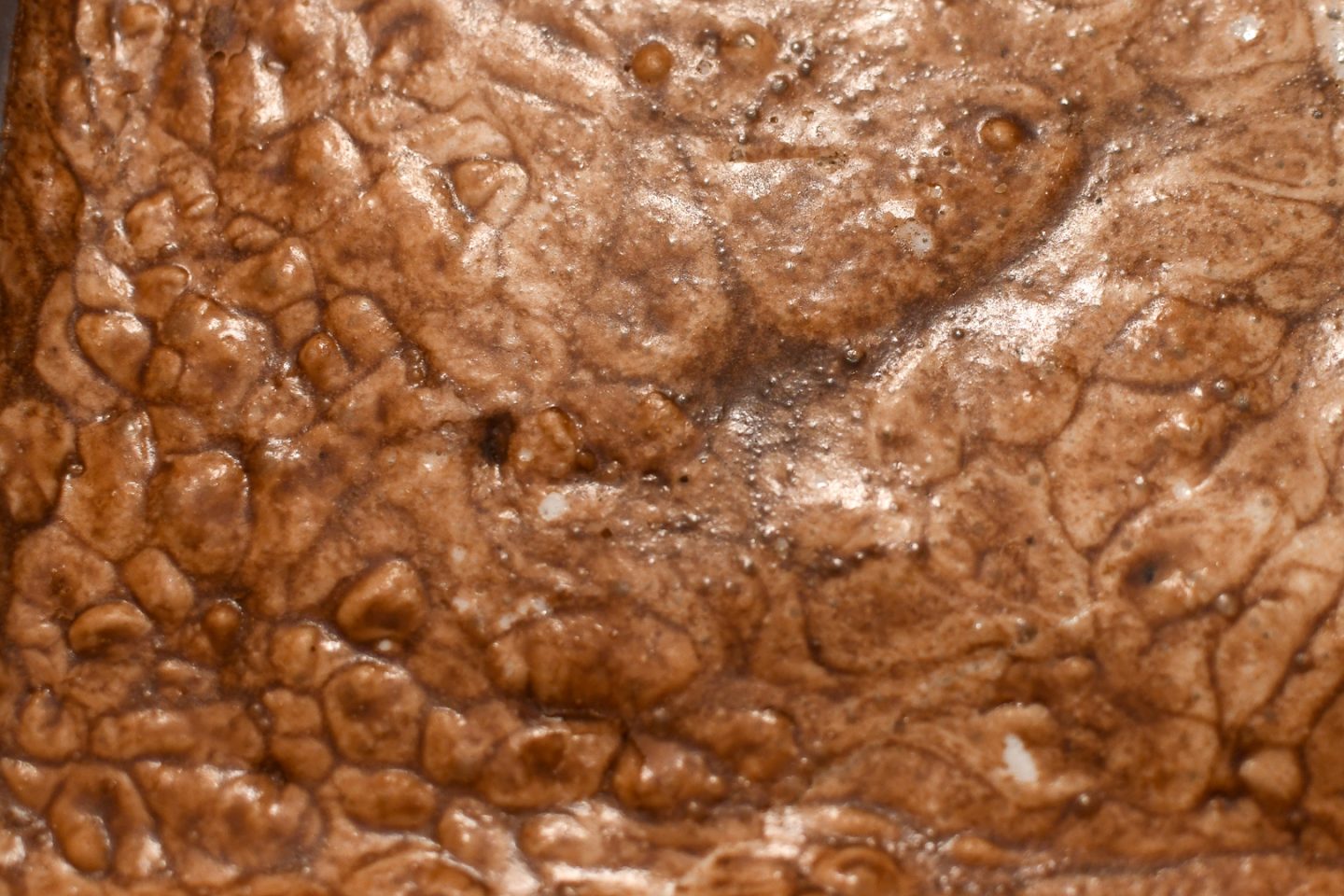 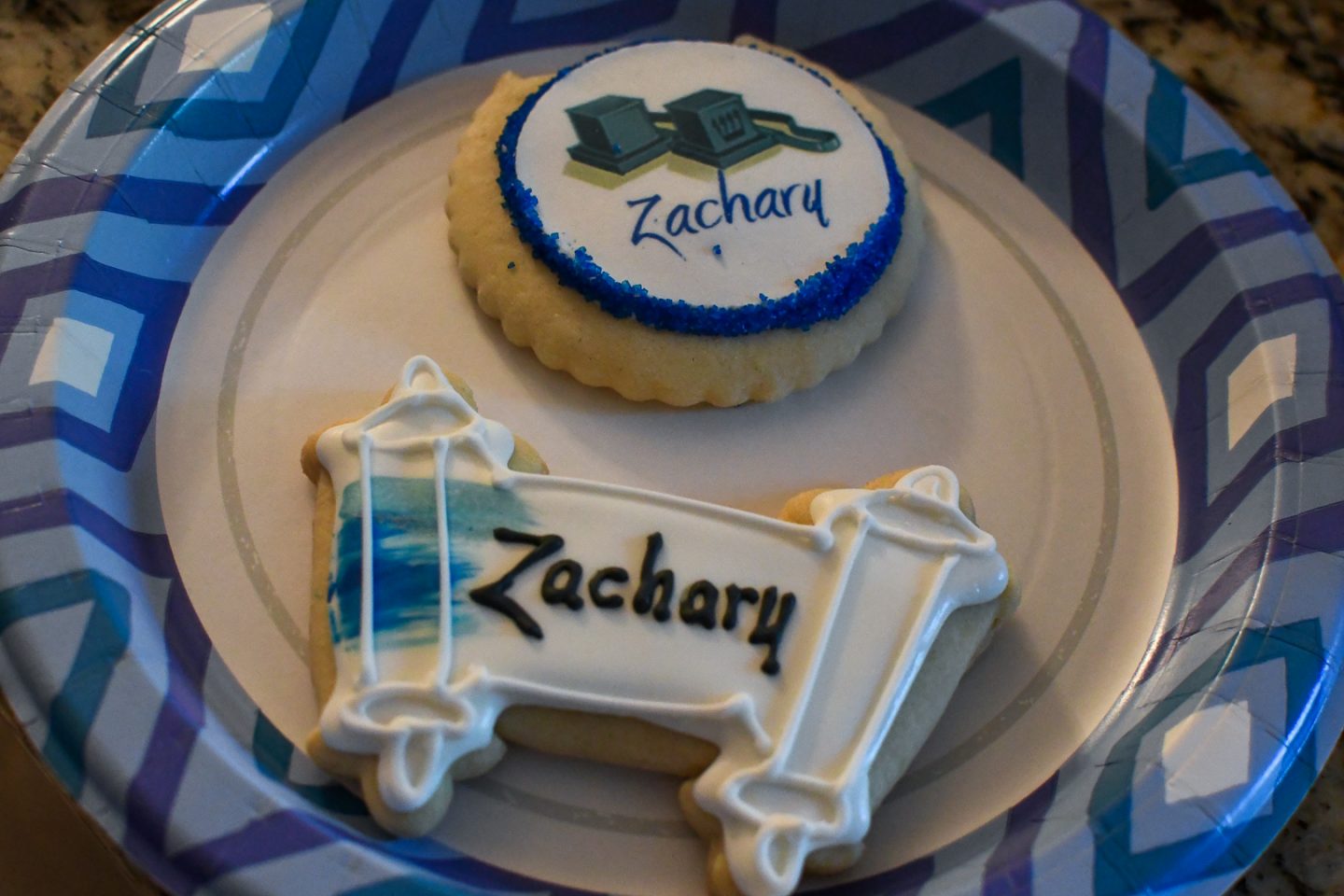 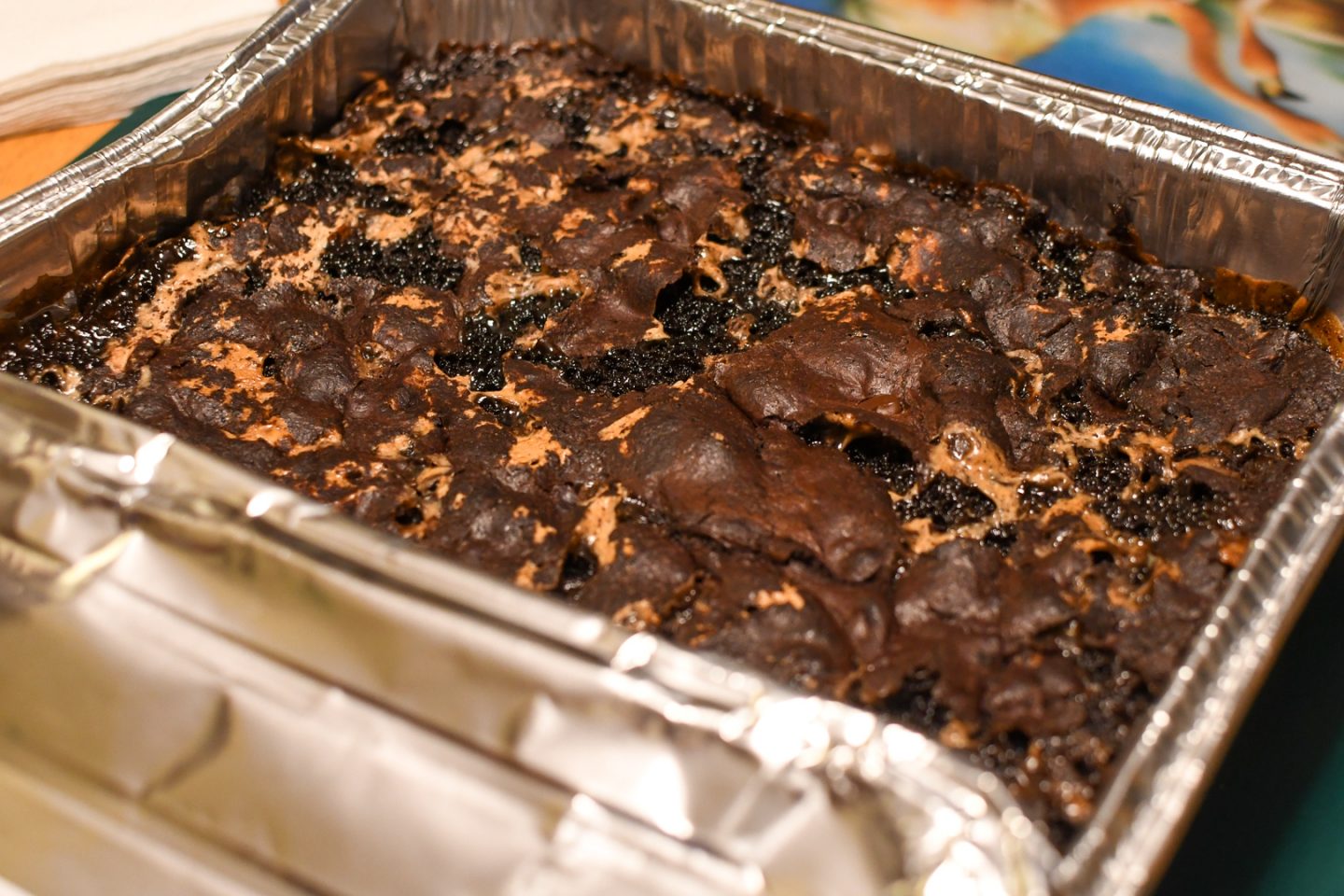 We prepared bags for the people who came to the service and we included the cookies in them!

All in all, it was a different sort of celebration, but it turned out about as well as we could have hoped!