This month, I finished three books. 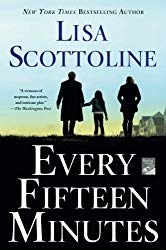 First, I read Every Fifteen Minutes by Lisa Scottoline. This was different from the other two books of hers that I read recently and it focused on a psychiatrist who didn’t know that someone was trying to ruin his life. Like with her other books, there were many people who could have been that person, but I didn’t guess exactly what was happening for most of the book.

“Dr. Eric Parrish is the Chief of the Psychiatric Unit at Havemeyer General Hospital outside of Philadelphia. Recently separated from his wife Alice, he is doing his best as a single Dad to his seven-year-old daughter Hannah. His work seems to be going better than his home life, however. His unit at the hospital has just been named number two in the country and Eric has a devoted staff of doctors and nurses who are as caring as Eric is. But when he takes on a new patient, Eric’s entire world begins to crumble. Seventeen-year-old Max has a terminally ill grandmother and is having trouble handling it. That, plus his OCD and violent thoughts about a girl he likes makes Max a high risk patient. Max can’t turn off the mental rituals he needs to perform every fifteen minutes that keep him calm. With the pressure mounting, Max just might reach the breaking point. When the girl is found murdered, Max is nowhere to be found. Worried about Max, Eric goes looking for him and puts himself in danger of being seen as a ‘person of interest’ himself. Next, one of his own staff turns on him in a trumped up charge of sexual harassment. Is this chaos all random? Or is someone systematically trying to destroy Eric’s life?”

I liked the fact that the main character was a psychiatrist, although for some reason I kept picturing him as Dr. Charles from Chicago Med! Some of the extra information could have been omitted – the double locked doors with the air space in between was mentioned so many times I was sure it would have been a part of the climax of the story! Overall, this was a book that kept me entertained. 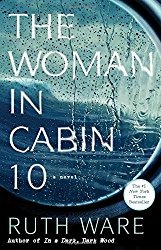 Next, I read The Woman In Cabin 10 by Ruth Ware. I was worried that I wouldn’t like this book as it has been hyped a lot! It took a little while to get into and was an ok read overall.

“In this tightly wound, enthralling story reminiscent of Agatha Christie’s works, Lo Blacklock, a journalist who writes for a travel magazine, has just been given the assignment of a lifetime: a week on a luxury cruise with only a handful of cabins. The sky is clear, the waters calm, and the veneered, select guests jovial as the exclusive cruise ship, the Aurora, begins her voyage in the picturesque North Sea. At first, Lo’s stay is nothing but pleasant: the cabins are plush, the dinner parties are sparkling, and the guests are elegant. But as the week wears on, frigid winds whip the deck, gray skies fall, and Lo witnesses what she can only describe as a dark and terrifying nightmare: a woman being thrown overboard. The problem? All passengers remain accounted for—and so, the ship sails on as if nothing has happened, despite Lo’s desperate attempts to convey that something (or someone) has gone terribly, terribly wrong…”

I feel like the plot and setting of the book could have been written into something more exciting. There were some surprises and I did worry about the main character, but there were also undeveloped plot points and a lot of auxiliary characters to confuse with one another. At least the ending made sense! 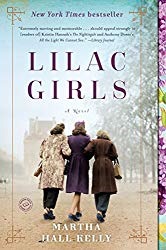 Finally, for my next book group selection, I read Lilac Girls by Martha Hall Kelly. I always say that it is kind of amazing how there are so many books about World War II and there is still so many new things to learn about that awful period in our history. This book is fiction that incorporates real people focusing on the Ravensbrück concentration camp and the Polish political prisoners there.

“New York socialite Caroline Ferriday has her hands full with her post at the French consulate and a new love on the horizon. But Caroline’s world is forever changed when Hitler’s army invades Poland in September 1939—and then sets its sights on France. An ocean away from Caroline, Kasia Kuzmerick, a Polish teenager, senses her carefree youth disappearing as she is drawn deeper into her role as courier for the underground resistance movement. In a tense atmosphere of watchful eyes and suspecting neighbors, one false move can have dire consequences. For the ambitious young German doctor, Herta Oberheuser, an ad for a government medical position seems her ticket out of a desolate life. Once hired, though, she finds herself trapped in a male-dominated realm of Nazi secrets and power. The lives of these three women are set on a collision course when the unthinkable happens and Kasia is sent to Ravensbrück, the notorious Nazi concentration camp for women. Their stories cross continents—from New York to Paris, Germany, and Poland—as Caroline and Kasia strive to bring justice to those whom history has forgotten.”

This book also took me awhile to get into and it was quite long overall. It also took quite awhile to reveal why the title of the book is Lilac Girls and how the character of Caroline connects to the other two. The book is told from the point of view of three women. Caroline is the one who is the hardest to get to know, and her activism could have been described further. Kasia is a fictional character based on the lives of political prisoners who were subjects of medical experimentation. Herta is a doctor who is at first appalled by the job she was hired for at Ravensbrück, but then is the one who operates on the prisoners. I especially liked the ending of the book which shows the way that Kasia’s anger from her experience effected the rest of her life and how she might move on from that. I also appreciate learning more about people who lived during World War II about whom I had not previously known.