I have a lot of books to share today! These are the books I read this summer since my last update, which was about 6 weeks ago. So it looks like I read a little less than a book per week! 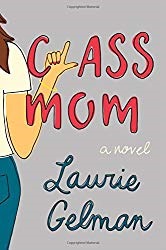 Our book group selection for our next meeting is Class Mom by Laurie Gelman. The book takes place in Kansas City and even though there were two mistakes with regards to Kansas (we start school in August, not September! And KU is not in Manhattan, KS, it’s in Lawrence), I still loved this book and found it hilarious!

“Jen Dixon is not your typical Kansas City kindergarten class mom―or mom in general. Jen already has two college-age daughters by two different (probably) musicians, and it’s her second time around the class mom block with five-year-old Max―this time with a husband and father by her side. Though her best friend and PTA President sees her as the ‘wisest’ candidate for the job (or oldest), not all of the other parents agree. From recording parents’ response times to her emails about helping in the classroom, to requesting contributions of ‘special’ brownies for curriculum night, not all of Jen’s methods win approval from the other moms. Throw in an old flame from Jen’s past, a hyper-sensitive ‘allergy mom,’ a surprisingly sexy kindergarten teacher, and an impossible-to-please Real Housewife-wannabe, causing problems at every turn, and the job really becomes much more than she signed up for.”

I have a feeling that my fellow book group members are going to hate this book because they just might relate to the moms that the book pokes fun at. A lot of the reviews on Amazon also point out that there was no real plot to the book. In my opinion though, the way that Jen became friends with some of the fellow kindergarten moms and improved the way she acted towards others was the point of the book. She’s not a perfect person or someone to emulate, but to me she was relatable and I loved her sense of humor. If you get offended by her snark, you probably take yourself too seriously! 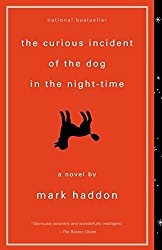 Next, I read The Curious Incident of the Dog in the Night-Time by Mark Haddon. This was Gabbie’s summer reading book for 8th grade English and I had always wanted to read it so when she finished, I borrowed it. We both really liked it!

“Christopher John Francis Boone knows all the countries of the world and their capitals and every prime number up to 7,057. He relates well to animals but has no understanding of human emotions. He cannot stand to be touched. And he detests the color yellow. This improbable story of Christopher’s quest to investigate the suspicious death of a neighborhood dog makes for one of the most captivating, unusual, and widely heralded novels in recent years.”

Although the book never states that Christopher has Asperger’s, it is widely known that this is the reason for his quirky behaviors. The book is written in Christopher’s view point and readers can relate to him and the way he feels, even if he doesn’t understand his own feelings. While he tries to solve the mystery of who killed his neighbor’s dog, he uncovers truths that were hidden from him and which lead to a change in his life. He realizes that he is able to do things he never would have thought would be possible and learns to have some control over his life as well as his emotions. 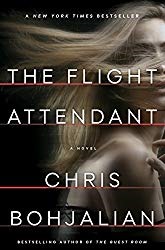 Chris Bohjalian is an author I have enjoyed in the past and when Dave decided he wanted to read The Flight Attendant, I requested it at the library. We waited awhile to get the book and we both wanted to read it, which we were able to do within our allotted library borrowing time!

“Cassandra Bowden is no stranger to hungover mornings. She’s a binge drinker, her job with the airline making it easy to find adventure, and the occasional blackouts seem to be inevitable. She lives with them, and the accompanying self-loathing. When she awakes in a Dubai hotel room, she tries to piece the previous night back together, counting the minutes until she has to catch her crew shuttle to the airport. She quietly slides out of bed, careful not to aggravate her already pounding head, and looks at the man she spent the night with. She sees his dark hair. His utter stillness. And blood, a slick, still wet pool on the crisp white sheets. Afraid to call the police – she’s a single woman alone in a hotel room far from home – Cassie begins to lie. She lies as she joins the other flight attendants and pilots in the van. She lies on the way to Paris as she works the first class cabin. She lies to the FBI agents in New York who meet her at the gate. Soon it’s too late to come clean-or face the truth about what really happened back in Dubai. Could she have killed him? If not, who did?”

Cassie is a bit unpredictable and tends to do things that she knows she shouldn’t. The best part of the book for me was shaking my head at all of the crazy things she did. She was seriously lucky that she never got herself into more trouble than she did. The ending of the book was a little confusing for me. I wouldn’t say this was one of Bohjalian’s better books, although it did contain a twist at the end, which I always enjoy in books I read! 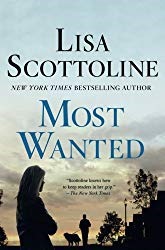 I picked up a copy of Lisa Scottoline’s Most Wanted at the library. I have read some of her books in the past and one of my blogger friends had been mentioning her books, so I thought I’d read this one!

“Christine Nilsson and her husband, Marcus, are desperate for a baby. Unable to conceive, they find themselves facing a difficult choice they had never anticipated. After many appointments with specialists, endless research, and countless conversations, they make the decision to use a donor. Two months pass, and Christine is happily pregnant. But one day, she is shocked to see a young blond man on the TV being arrested for a series of brutal murders―and the blond man bears an undeniable and uncanny resemblance to her donor. Delving deeper to uncover the truth, Christine must confront a terrifying reality and face her worst fears. Riveting and fast-paced, with the depth of emotionality that has garnered Lisa Scottoline legions of fans, Most Wanted poses an ethical and moral dilemma: What would you do if the biological father of your unborn child was a killer?”

Although I found some of the dialogue repetitive, I enjoyed the mystery and the way Christine set out to solve it. I liked the way the couple’s relationship developed over the course of the book, as well as the way they each reacted to the fact that they had used a donor to get pregnant in the first place. This book isn’t rated one of Scottoline’s best, and it does have some unbelievable plot points, but it was a quick and easy read and I will certainly try to read more of her books in the near future. 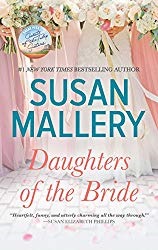 I also picked up a Susan Mallery book at the library, as I have enjoyed her books in the past. Daughters of the Bride told the story of 3 sisters and their mother, who is about to get married.

“As the awkward one, Courtney Watson may not be as together as her sisters, but she excels at one thing—keeping secrets, including her white-hot affair with a sexy music producer. Planning Mom’s wedding exposes her startling hidden life, changing her family’s view of her—and how she views herself—forever. When Sienna’s boyfriend proposes—in front of her mom and sisters, for crying out loud—he takes her by surprise. She already has two broken engagements under her belt. Should she say ‘I do’ even if she’s not sure she does? Rachel thought love would last forever…right up until her divorce. As Mom’s wedding day draws near and her ex begs for a second chance, she’s forced to acknowledge some uncomfortable truths about why her marriage failed, and decide if she’ll let pride stand in the way of her own happily-ever-after.”

I tend to like stories of groups of women, told individually but with some overlapping problem that ties them together.In this book the shared issue between the women was finding love for themselves, as well as for each other. Courtney was probably the main character described. As the youngest and having had a learning disability, she was viewed by her sisters and mother as incapable of many things. However, she eventually able to prove them wrong. She is also wary of love, which she finds with another main character in the book – the only male who has chapters written from his point of view. Sienna’s story could have been better developed, with less attention being focused on her, although it was obvious to me who she should end up with. Finally, Rachel finds herself still having feelings for her ex-husband. Her journey to happiness also involved exercise and weight loss, plus loving herself. I think that accepting the love they deserved was a key theme in this book, and I enjoyed following each of the stories.