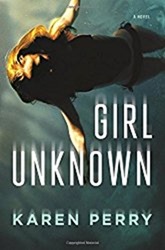 I received a copy of Girl Unknown by Karen Perry from TLC Book Tours in exchange for my review. This book reminded me a bit of another book I read, Pretty Baby by Mary Kubica. Both books feature girls who enter an established family and throw things around a bit. In this story, Zoe’s presence changes everything.

“David and Caroline Connolly are swimming successfully through their marriage’s middle years―raising two children; overseeing care for David’s ailing mother; leaning into their careers, both at David’s university teaching job, where he’s up for an important promotion, and at the ad agency where Caroline has recently returned to work after years away while the children were little. The recent stresses of home renovation and of a brief romantic betrayal (Caroline’s) are behind them. The Connollys know and care for each other deeply. Then one early fall afternoon, a student of sublime, waiflike beauty appears in David’s university office and says, ‘I think you might be my father.’ And the fact of a youthful passion that David had tried to forget comes rushing back. In the person of this intriguing young woman, the Connollys may have a chance to expand who they are and how much they can love, or they may be making themselves vulnerable to menace. They face either an opportunity or a threat―but which is which? What happens when their hard-won family happiness meets a hard-luck beautiful girl?”

This book takes place in Ireland and the dialogue can almost be heard as being said with an Irish accent. While it’s meant to be a thriller, the book was actually more of a family drama, told from the alternating viewpoints of Caroline and David. The author is in fact a pen name for two writers – Paul Perry and Karen Gillece – and I wondered if they wrote alternating chapters as well. Zoe is the one character whose thoughts would have been interesting to hear, but of course, we are meant to keep guessing what her true motivations are. The children in the book are important, but we don’t hear their viewpoints until the end, which does include a surprising twist.