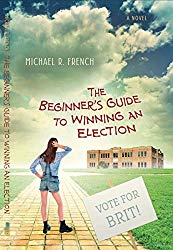 The Beginner’s Guide To Winning An Election is a new middle grade / young adult novel written by Michael R. French. I received my copy from TLC Booktours.

Brit Kitridge has a newfound interest in politics. She joins the winning team in high school elections, Team Matthew. Within a week of joining the team, she is accused of being a hacker and trying to jeopardize the election for Matthew. So she decides to run for president herself.

“Brit Kitridge’s plan was just to get her high school diploma and head to college and med school, but nobody can escape from fate, or is it history? The Beginner’s Guide To Winning an Election reveals our main character’s love for history, and after a summer reading books that fuel her passion for politics, Brit decides to join TM (Team Mathew), a fourteen-member group that has helped Mathew Boltanski win every election he’s ever entered. Now he’s going for the big one—student body president. By orchestrating brilliant campaigns one after the other, TM has made Matthew a national young star and promising politician who could even run for higher office in Washington. When Brit is accused of sabotaging the team, she realizes that Hawthorn High has its secrets, and someone needs to shed some light on them. The story is set in a world six years ahead of our time. Security is a constant issue. Politics isn’t black-and-white, it’s not even gray anymore. Inflation is out of control and the educational system is in crisis. But what happens when you find out what’s really going on? What do you do with secrets no one but you wants to hold up to the light?”

Unfortunately, this book didn’t work out for me, as I found it very slow and I couldn’t get into it. However, I wanted to share some of the feedback this book has received.

“Beginner’s Guide to Winning an Election is a great read for teens to both draw an understanding of politics and to spark inspiration with how to make an honest difference with a coming of age journey, a respect for history and community, and the fight for change.”  Elizabeth Konkel

“Young adults receive an inspirational story of a young woman’s determination to not just to run for office, but to do the right thing as she faces many obstacles to success…a powerful story of a novice’s journey through American politics which will appeal to all kinds of readers, from idealistic, aspiring young women to those who want a realistic tale of a high school girl’s coming of age.” – Diane Donovan @ Midwest Book Review

“The Beginner’s Guide to Winning an Election by Michael R. French is a novel that captures the readers imagination and attention as it speaks of being the difference in this world, not compromising one’s values and being a person of integrity.” – Brian A., an Amazon reviewer

“…this book could be of interest to adults for the parallel it describes with respect to the horribly broken political system presently extant within the U.S. and perhaps could serve as a tool to be employed by teachers of young, and near adult, students.” – John, an Amazon reviewer

I am sorry that I did not connect with this book, as a book that helps youth learn about politics and their importance in the system as they get older is definitely something I see as needed in the current times.