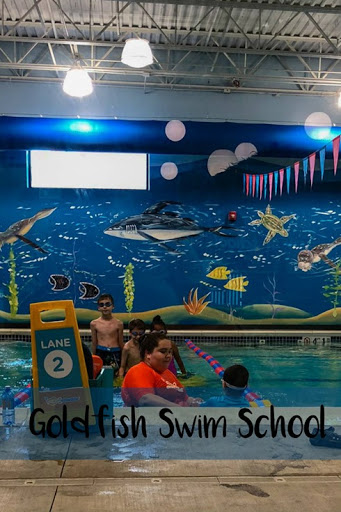 I am partnering with Goldfish Swim School for this post. All opinions are my own.

About 6 weeks ago, Simon started swim lessons at Goldfish Swim School. My older kids never relied on floaties when swimming like Simon did. I only forced him to give up his puddle jumper this summer – at the age of almost 8. Instead, he insisted that he needed a swim noodle or a life jacket whenever he went swimming. Last summer, he figured out how to do a short doggie paddle. He had a swim lesson with his camp’s lifeguard, but it didn’t go very well. This summer he was still very nervous and would not put his face in the water. Obviously I knew Simon needed lessons and I was thrilled when I heard Goldfish was opening nearby, as I had heard such great things about them from my blogger friend Danielle!

Walking into the swim school for the first time, I was so impressed with how bright and open everything is. There are changing room cabanas, some of which have bumbo seats for babies to sit in while their parents change (for the baby’s classes, parents go in the water too). For some reason, Simon prefers changing in the cabanas that the babies use! In the waiting area, there is a small play area with a kitchen and coloring sheets, as well as a fish tank. 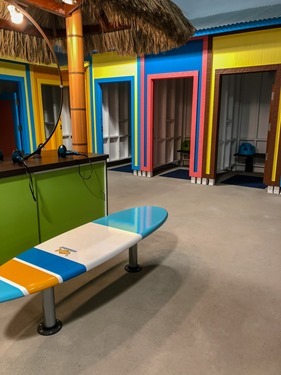 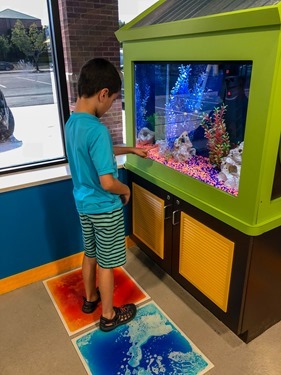 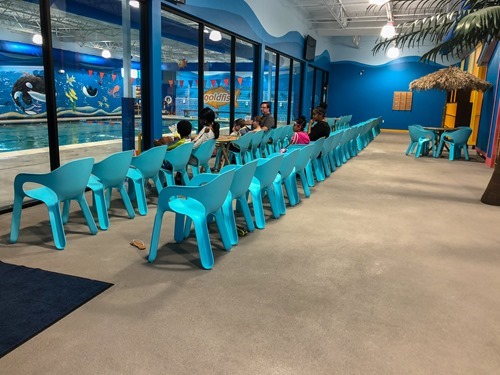 The large windows separate the parents from the pool area. Simon likes me to sit in the first row, where he can see me easily. Every time he takes a turn swimming, he looks at me and smiles or gives me a thumbs up.

At his very first lesson, an extra instructor joined the class to assess him and make sure he was in the right group. I love that the classes range from 1-4 students. Each week it has differed based on everyone’s schedules, and Simon has even gotten a private lesson once! When there are 2-4 swimmers, everyone takes turns. There is a ledge in the water around the edge of the pool for the kids to wait on, and there is an island in the middle that they swim to. Simon recently realized he can actually stand in the 4 foot water, but the ledge and the island made him feel safe from the start. 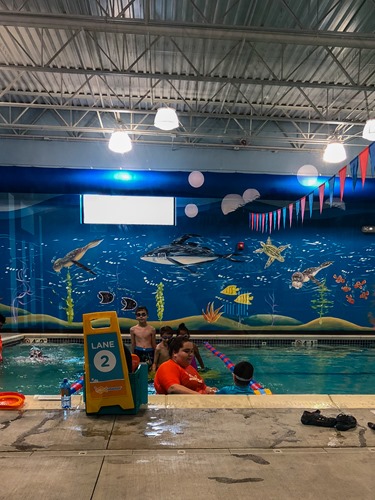 Simon’s class is called Glider 1 and the students range from 5-12 years old. I love that Simon is right in the middle of that age range. He has mostly been with other kids around his age, so he doesn’t feel like he is on the older end of learning to swim, like I did when I was his age and was placed in a class with 3-year-olds. I don’t know whether it was seeing other kids doing it or just the encouragement he got from the instructors, but by his second class, Simon was putting his face in the water. In order to move up to Glider 2, there is a list of skills that Simon is working on, including the flutter kick, superman glide, back float, and underwater dip. His favorite thing is swimming under to get the rings the instructor throws for him – and this was a kid who wouldn’t put his face under water at all 2 months ago! 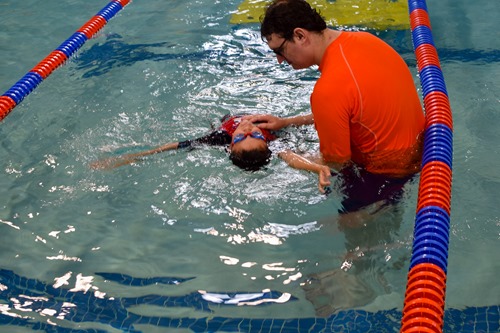 Lessons last for half an hour and the during last 5 minutes, parents come in and get an update on how their swimmer is progressing, as well as what they need to work on. Simon needs to work on back floating. He has gotten much more confident, as he was scared to float on his back when he first started, and now he will relax more, but he isn’t quite able to do it on his own yet.

During lessons, while 1 instructor works with up to 4 kids at a time, there is another instructor who serves as a life guard and walks on the pool deck. I love this, because I know that while teaching, it is not always possible to watch every kid who is waiting for his or her turn! 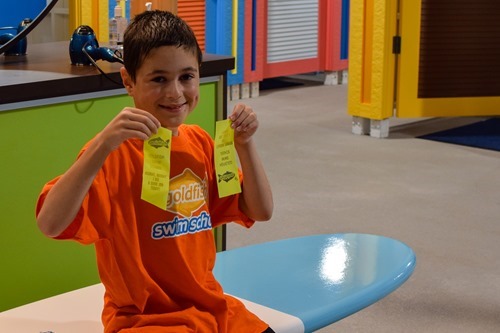 Simon loves that he gets a ribbon that says he’s done a good job. Because August was his birthday month, he got a free snack from the snack bar and a special ribbon. Every week, the kids get a different prize, whether it is a sticker, a tattoo, or a goldfish mascot bath toy. They also give out balloons, which the younger kids seem to love! When you join, you also get a Goldfish Swim School shirt, as you can see above. Simon insists on changing into this shirt every week after his lesson!

Our summer break is over and the pool we go to is closing for the season soon, but I’m excited to continue swim lessons for Simon throughout this year. This way, he will keep up and improve his skills and by next summer, he’ll be even more confident swimming alongside his siblings. Soon after starting at Goldfish, Simon was finally willing to go in a pool without his trusty swim noodle! 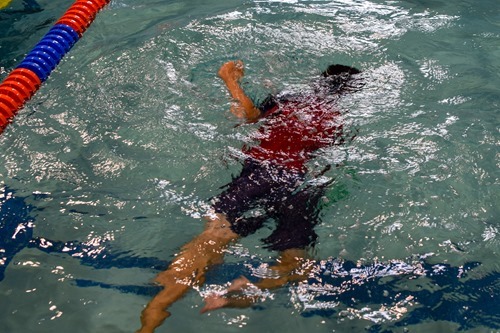 After his first class, Simon wanted to sign up and come back as soon as possible. I’m so happy he loves learning to swim! I will be sharing more about Simon’s lessons and about Goldfish Swim School as we continue our lessons this year!