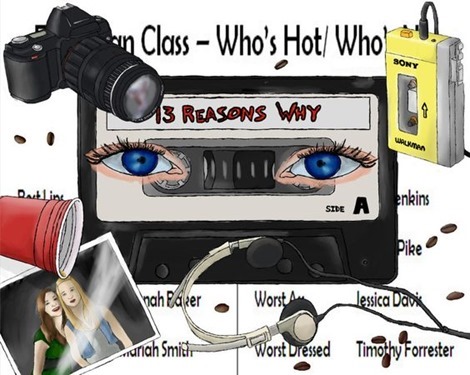 Last week, Danielle shared the story of how she was bullied in high school for being too thin. Like many people, I too was bullied in middle school / high school. I am sure that if we had social media when I was a teenager, the bullying would have been much worse, as when you can hide behind a screen, you tend to become more brave. Although I sometimes wish we had phones and texting back then, I am glad the only way the bullies had to reach me was by calling my house and saying things about me while I listened.

I will admit I only watched part of the first season of 13 Reasons Why before it mad me too angry to continue. I did read the book though, and in part of my review, I wrote “I just did not find Hannah’s reasons for killing herself to be believable. She had many of the same problems as any average teen does (rumors spread about her, for example).” I also felt that the book depicted suicide as an appropriate escape from or solution to difficult issues. Suicide is not something that should be glorified or encouraged. One of the biggest problems I had with the book and the part of the show that I watched is that Hannah’s parents were not around and she did not seem to have adult support. She approached her school counselor, who did not help her.

The school counselor at the school my kids attend actually sent out multiple emails about the show 13 Reasons Why this year. She wrote “This is a fictional story based on a novel and is meant to be a cautionary tale, not a real-life depiction of what should happen when things get difficult. There are healthy ways to cope with the topics covered in the show; acting on suicidal thoughts is not one of them. Most individuals are able to go on to lead healthy, productive lives even when faced with adversity after reaching out to others and finding ways to cope. In spite of the show’s portrayal of a serious failure in treatment by parents and school personnel, this is not typical. Treatment works and there are many options of support for life challenges, distress and mental illness. If the sources of help you try are not effective, keep trying until you find the appropriate source of help.”

In the article 13 Reasons Why Discussion Guide, it says “While 13 Reasons Why portrayed a suicide death that already occurred, it’s important to know that suicide is known to be a tragic but often preventable health outcome. The vast majority of people who face the challenges portrayed in 13 Reasons Why find ways to be resilient.” The good thing about the TV series is that it is bringing up many issues that teens face and is a step in beginning communication about these issues.

I don’t really remember what ways I used to cope with bullying in my teenage years. I know my parents were supportive and one time that my bullies called me on the phone to taunt me, my father even yelled at them to leave me alone. Of course, this led to more teasing, but I appreciated him doing that for me. At the same time, I still have residual issues left over from these bullies. The person who treated me the worst had formerly been my closest friend. I think the way she treated me contributed to my difficulty forming close friendships for years afterwards. My self-esteem was effected as well.

I know that what I went through is much worse for many people, and I imagine 13 Reasons Why was trying to show some of the worst bullying that a teen can experience, but for me, the book (and the beginning of the show) fell short of really displaying that. Instead, it placed blame for a teen’s suicide on other teens who probably were bullied themselves. From what I read, it seems that maybe Season 2 of the show is addressing that issue.

Here are some of the sources that our school counselor shared with us:
13 Reasons Why Discussion Guide | Talk To Someone – Crisis Information | Tips For Parents For Talking to Their Children About 13 Reasons Why And Suicide

Were you ever bullied? Do you watch 13 Reasons Why?