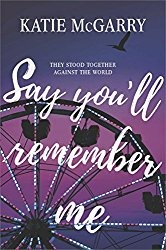 I received a copy of Say You’ll Remember Me by Katie McGarry from TLC Book Tours in exchange for my review. This book is a look at the current hot topics of privilege and criminal justice. Drix is coerced into a plea bargain for a crime he did not commit and because his family does not have money or resources, he has no choice in the matter. Elle, on the other hand lives a life of privilege, but she still struggles with being who she wants to be rather than what her parents and society want her to be.

“When Drix was convicted of a crime—one he didn’t commit—he thought his life was over. But opportunity came with the Second Chance Program, the governor’s newest pet project to get delinquents off the streets, rehabilitated and back into society. Drix knows this is his chance to get his life back on track, even if it means being paraded in front of reporters for a while. Elle knows she lives a life of privilege. As the governor’s daughter, she can open doors with her name alone. But the expectations and pressure to be someone she isn’t may be too much to handle. She wants to follow her own path, whatever that means. When Drix and Elle meet, their connection is immediate, but so are their problems. Drix is not the type of boy Elle’s parents have in mind for her, and Elle is not the kind of girl who can understand Drix’s messy life. But sometimes love can breach all barriers. Fighting against a society that can’t imagine them together, Drix and Elle must push themselves—Drix to confront the truth of the robbery, and Elle to assert her independence—and each other to finally get what they deserve.”

Both Drix and Elle are seen by society the way society chooses to see them – not how they wish to be seen. Drix is seen as someone who served time for a crime. He wants to go to school for music but no one wants a criminal at their school. Elle is seen as a political pawn for her father’s career. She wants to learn coding, but her father wants her on the political trail. Though their relationship is frowned upon from the start, they manage to use their new found friendship to find the truth in both of their situations. I really enjoyed the subject, style, and characters in this book.