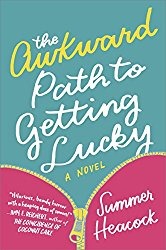 I received a copy of The Awkward Path to Getting Lucky by Summer Heacock from TLC Book Tours in exchange for my review. You guys, this book is hilarious! When you have a group of 4 friends working together in a bakery, I’m sure things can get silly. But with these 4 – one mom-type, one loud and outgoing, one quiet and reserved, and one with a problem with her private parts – things are non-stop hilarious. Throw in one cute but a bit awkward guy who keeps walking in on embarrassing discussions? It’s the funniest book I’ve read in a very long time.

“Having sex wasn’t exactly high on Kat Carmichael’s priority list while her successful bakery was taking off, especially since things hadn’t been working very well in that department. And the last time she and her boyfriend, Ryan, even attempted the act, they found it to be physically impossible—resulting in pain and disappointment for Kat instead of sunshine and orgasms. With just over a month until their four-year anniversary, Kat calls for a break in her relationship with Ryan, encouraging him to see other people while she throws herself into physical therapy. Yet even with the well-intentioned (but wildly inappropriate) attempts at help from her best friends, Kat quickly discovers that a solo mission may not be the best approach. Fortunately, physical therapist Ben Cleary, the shop’s best (looking) customer, volunteers to help out—strictly as a friend, of course. But as the line between love and friendship begins to blur, Kat stands to lose much more than a functioning set of lady bits if she can’t figure out what to hang on to…and what to let go.”

Kat realizes that she has to understand her mind in order to help heal her body, and she does so with input from her 3 best friends who I mentioned above. She also discovers that her relationship with Ryan is sitting in a rut. Ben is the best guy to help Kat learn about relationships and what she wants for herself. He is the perfect blend of funny and sweet and is perfect for Kat. It might take her some time to realize that though! At the same time as Kat is dealing with all of this in her personal life, the bakery she and her friends own is going up for a big contract, plus Kat appears on a morning TV show to promote the bakery. As you can imagine, even more hilarity ensues.

There are swear words and sexual talk used in the book, but it all adds to the hilarity of it, I promise!