The Scandal Season 3 finale returned the show to its previous season finales, with Fitz happy that if he would no longer be president, he could be with Olivia. Until that couldn’t happen anymore. Every single time it’s the same thing. Except not the same, because it just gets worse. [SPOILERS]

I guess after this episode we are meant to hate Olivia. She finally (finally!) tells Fitz that she loves him and then she runs away when he needs her the most, when he’s crying on the Oval Office floor after his son is killed and his wife is trying to get him up and all he can say is “where’s Olivia?”

Where’s Olivia? On a plane that her father provided, back in the season premiere, brought back for the same reason – to get her away from Fitz. And not only that, she’s with the very person who she has told multiple times that she is in love with someone else, yet he just won’t go away. I just can’t.

Fitz was seemingly redeemed from his bad behavior towards Mellie in the last few episodes, because when he finally found out that she was raped (and I was right that Olivia would tell him!) he went to her and knew he needed to be there for her. Does this mean their marriage is going to go forward as a unit? I’d say no, but who knows with Olivia being somewhere else with someone else. According to Tony Goldwyn, Fitz is never going to give up on Olivia and he believes she is his soul mate.

Olivia’s father was the one orchestrating everything in this episode – killing Jerry supposedly because Fitz had taken his child (Olivia) and now Fitz should lose a child too. Using Tom, who used to be one of Fitz’s only true supporters to kill Jerry. Telling Fitz that Olivia’s mother was really the person who did all of this, and saying that she was now dead, while meanwhile she’s not dead, she’s in the hole. The family relations in this show are just out of control.

To say I’ve been disappointed by this season would be an understatement. Obviously things can’t be perfect, but I hate seeing characters I’ve loved be torn apart and made hateful. I can only hope that things will pull together and get back to the show I love in season 4. I know a lot of people are giving up on the show, but I can’t see myself doing that just yet. I only just started watching! So while I wait for the new season, I’ll be wearing my brand new “Grant For The People” shirt from alliedshirts.com! 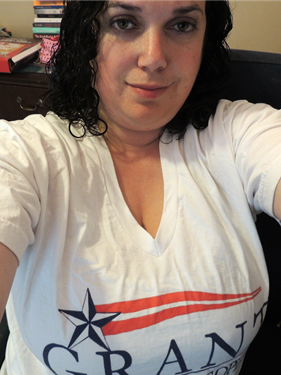 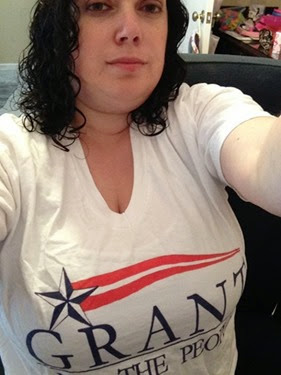 I designed it on the Allied Shirts site, chose an American Apparel shirt, and here it is! (Allied Shirts provided me with this shirt in exchange for my mentioning their service on my site!)

Does anyone have any show recommendations for this summer? Thanks!