Season 3 Episode 17 appealed to me more than Episode 16 did. Last week’s episode was too depressing for me; this week was better, with some cute and funny moments as well as a lot of thrills that helped make things more exciting than sad. I have a friend who is a sports writer and he told me how he was so excited to use the word “penultimate” for the 2nd to last game of the season. In that vein, here are my thoughts on the penultimate episode of Scandal Season 3. [SPOILERS!]

Jake revealed in front the president that Olivia slept with him in order to hack into his phone. I actually said “NOO!” out loud!

Olivia assured Fitz she knows that Sally doesn’t have the NAACP vote because she’s black.

Olivia instructed Fitz on his Spanish accent. Ok this wasn’t funny as much as it was cute.

Harrison tried to call Rowan / Eli “Papa Pope.” This is funny because the fandom refers to him as Papa Pope.

And finally, when Fitz sneaks out of the White House, disregarding Olivia begging him to stay put because she thought there was a bomb where he was headed: 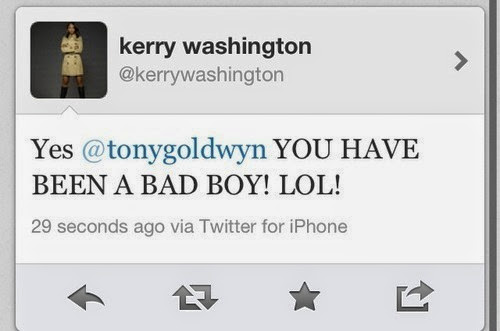 Now, the main story as headed into the finale involves two main threads. First, Mellie seems to want a paternity test to find out if her son Jerry is Fitz’s son, or if he was conceived due to the rape at the hands of Fitz’s father. Mellie asked the White House doctor about getting a paternity test and Leo Bergen found out. He then facilitated the test for his own gain, hoping it would help Sally to win the presidency. When Olivia confronted Mellie about wanting the test done, Mellie said she wants to ruin Fitz, and she also stated that she wants to free herself from Big Jerry. Hence, Olivia realized what actually happened to Mellie and arranged for the test to come back that Jerry is Fitz’s son. However, she offered that if Mellie actually wanted to know, she would get the correct test results. I am not positive, but I think Mellie may have received the correct test results, and now she still needs to decide whether to tell Fitz.

Second, obviously is the bomb that is set to go off in the finale next week. Although the team thought the bomb was at Defiance High School where Fitz was speaking, it turns out it’s actually at the church where a funeral for a Senator is about to be held. In attendance there are Sally and Leo, as well as Andrew. Fitz is supposed to be there too but at the moment, he isn’t. The question remains as to why exactly Olivia’s mother wants to kill the president. The story involving Olivia and her parents is very interesting, as her mother doesn’t seem to care that her husband has a gun to her lover’s head, and he proceeds to kill him when she won’t reveal the location of the bomb. Olivia takes this to mean that her mother doesn’t love anyone and she wonders if things would be easier if she didn’t care about anyone. (However, at this point she tells Jake she actually loves Fitz. I seriously need her to say that to Fitz!!) Olivia’s mother then goes on to almost kill Olivia’s father, leaving Olivia sobbing over him bleeding out on the floor when she finds him after returning from Ohio.

So leftover for next week: Is Jerry Fitz’s son or not, and will Mellie tell Fitz the truth? What will Fitz think about her holding back what happened to her for 15 years? Will Sally be killed in the explosion? If so, will Fitz win the election by default? Will someone else run against him instead of Sally? We don’t even know who Sally was planning to be her VP, so I’m thinking if someone else ran, Fitz would win. But will he feel like he won because he deserved to win? Will Olivia’s father survive? And why does her mother want to kill the president? Is Olivia really done with Jake this time? Will she be afraid that Fitz is at the church and when she finds out he wasn’t there, will she tell him she loves him? Will the cliffhangers for next season be huge? How will I make it through the summer hiatus?