The below post was written prior to the tragic events that took place in Overland Park, KS yesterday afternoon. Gabbie was at her dance class get together at the Jewish Community Center when I heard that there had been a shooting there. I had a few minutes of pure panic in which I emailed her dance teacher, tried to confirm the news was true, contacted my husband who was working out at the gym at the time, and finally received a note from her dance teacher that the kids were doing just fine. Dave headed directly to the JCC and picked up Gabbie, who had been in lock down – the dance classes actually performed for the others who were there waiting to be allowed to leave! We are all a bit shaken, but physically ok. The shooting was allegedly an anti-Jewish hate crime, something we never would have expected to occur here or anywhere else, but as we know these things do occur in our world. Three people were killed – at least two of whom weren’t even Jewish, and who happen to be related to one of Dave’s co-workers. Thank you to everyone who thought of us and reached out to make sure we were ok. May we only hear good news from now on.

(Some of this info is copied from my Passover post from last year!)

The most significant observance related to Passover involves avoiding chametz (leaven; sounds like “hum it’s” with that Scottish “ch”) throughout the holiday. This commemorates the fact that the Jews leaving Egypt were in a hurry, and did not have time to let their bread rise. It is also a symbolic way of removing the “puffiness” (arrogance, pride) from our souls.

Chametz includes anything made from the five major grains (wheat, rye, barley, oats and spelt) that has not been completely cooked within 18 minutes after first coming into contact with water. Orthodox Jews of Ashkenazic (Eastern European) background also avoid rice, corn, peanuts, legumes (beans) and some other foods as if they were chametz. All of these items are commonly used to make bread, or are grown and processed near chametz, thus use of them was prohibited to avoid any confusion or cross-contamination. Such additional items are referred to as “kitniyot.”

The grain product we eat during Pesach is called matzah. Matzah is unleavened bread, made simply from flour and water and cooked very quickly. This is the bread that the Jews made for their flight from Egypt. We have come up with many inventive ways to use matzah; it is available in a variety of textures for cooking: matzah flour (finely ground for cakes and cookies), matzah meal (coarsely ground, used as a bread crumb substitute), matzah farfel (little chunks, a noodle or crouton substitute), and full-sized matzah (sheets about 8 inch square, a bread substitute). 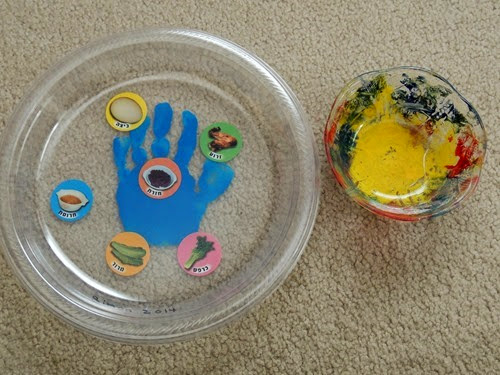 This is Simon’s seder plate. “On the first two nights of Passover, we have a special family meal filled with ritual to remind us of the significance of the holiday. This meal is called a seder, from a Hebrew root word meaning “order,” because there is a specific set of information that must be discussed in a specific order.” The bowl is meant for the salt water, which reminds us of the tears of the Jewish slaves in Egypt. 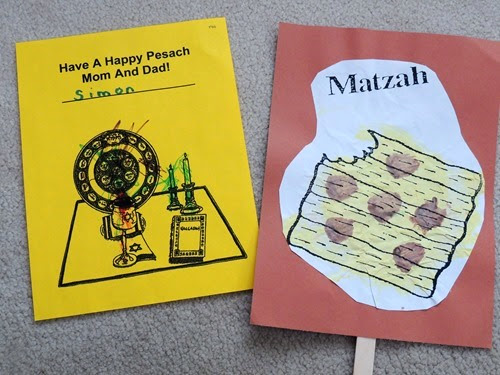 Simon colored this card for us, and made a Matzah puppet.

The following are pages from Simon’s Hagaddah – the special book that we use at the Passover Seders. 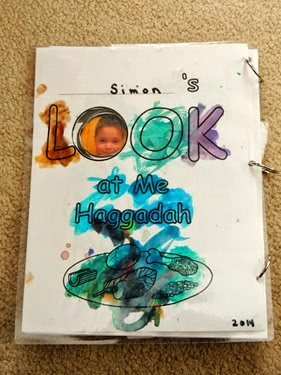 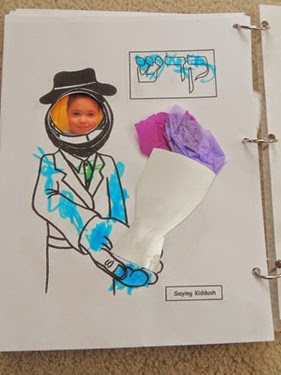 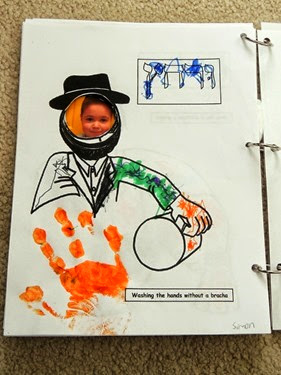 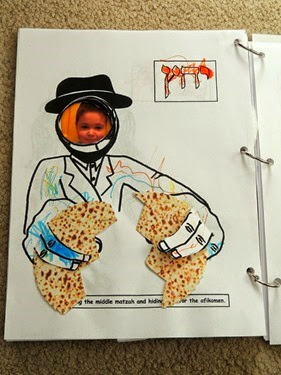 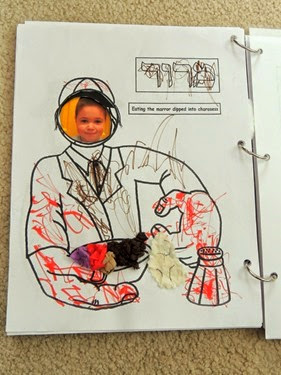 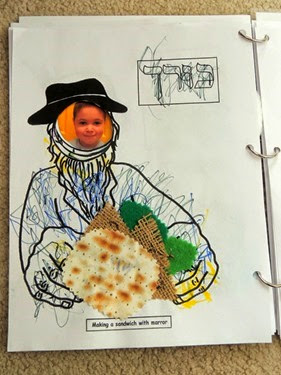 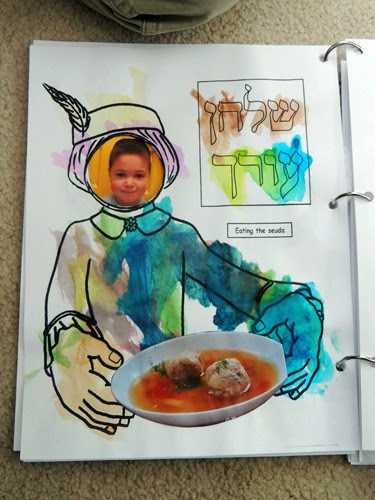 This is Zachary’s pillowcase. On the Seder night we recline on pillows, to remind us that once we were slaves, but now we are free. 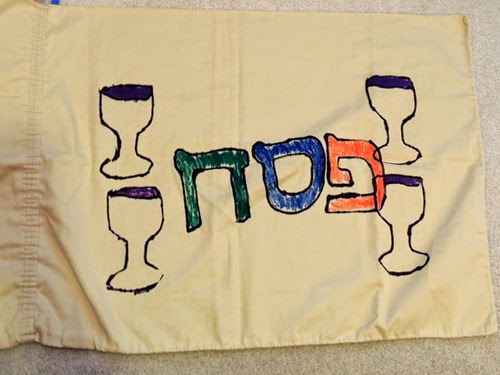 The following are a few pages of Zachary’s Hagaddah. 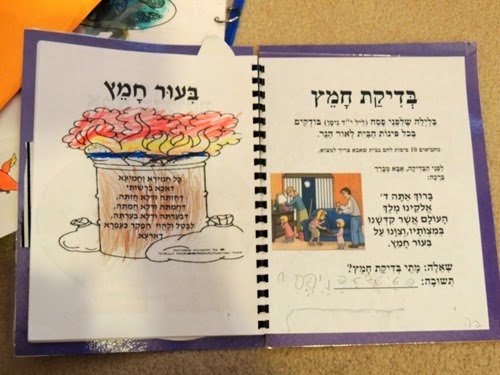 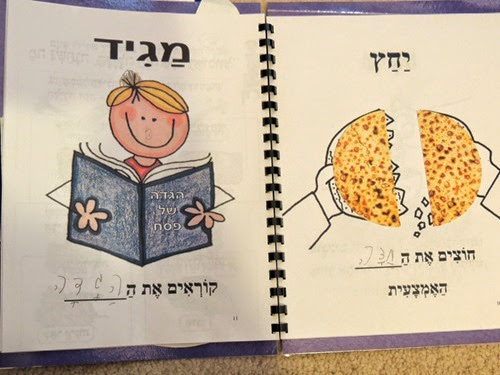 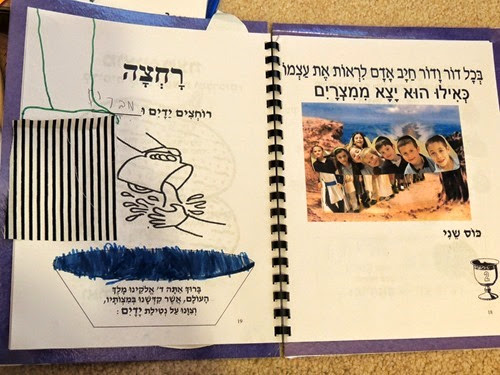 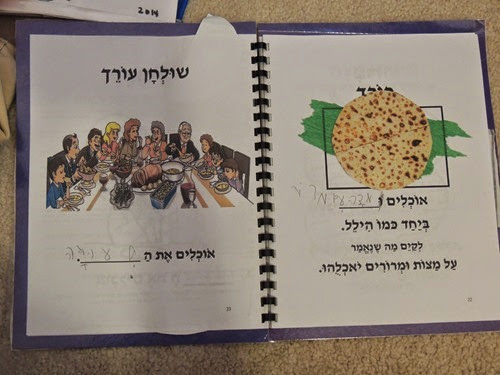 This is a placemat that Gabbie made. It depicts some of the blessings said during the Seder. 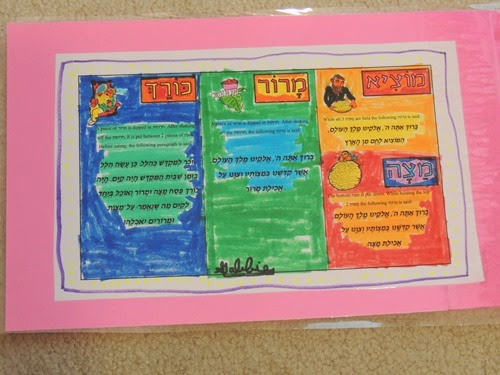 Gabbie brought home a Hagaddah as well as a supplemental packet with all the things she has learned about the holiday. As you can see, as they get older, what they bring home from school becomes more advanced! 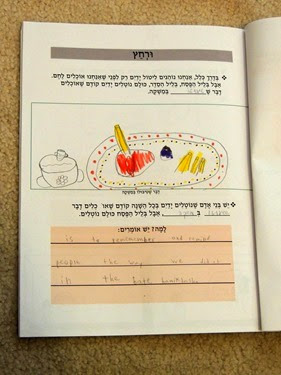 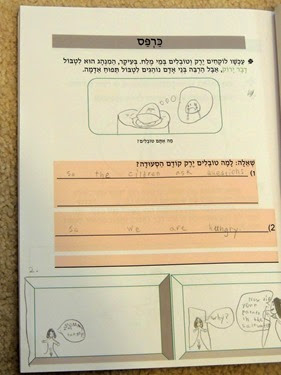 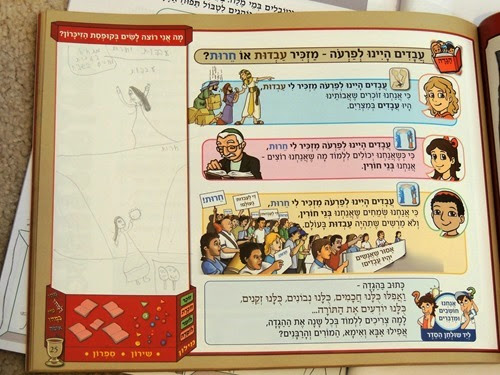 We also have a bin full of the kids’ projects from years’ past, so it should be fun this year to use their items, both new and old! If you are celebrating, have a nice holiday!