The Scandal cast is all over twitter and late last week they were tweeting while filming episode 314, directed by Paul McCrane of ER fame. The next episode that they will film, 315, will be directed by none other than Scandal star Tony Goldwyn. 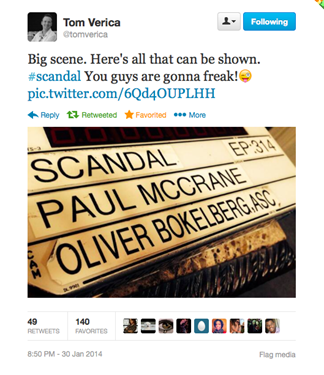 Of course, the fans are speculating as to what might be happening in the upcoming episodes and today I’m sharing my hopes for the rest of Season 3 – there are only 8 episodes left this season, so they’d better be good! (Beware of possible spoilers!)

1. I want to see Olivia and Fitz working together politically again. They work well together! I want her as his campaign manager and I want to see her strength come back. Her character has been so sad lately, it’s depressing!

2. I want to see a move towards Fitz and Mellie actually divorcing. The plan that Olivia came up with at the end of Season 2 was really good, so I think they should use it. And before you tell me you think they should stay together, try to remember the scene where Fitz and Olivia first meet – the marriage was already dead back then! Here’s what Kerry Washington had to say about Fitz and Olivia:

3. I want to see a few more flashbacks, just to explain some of the things that were left unexplained. But I do want to see things moving forward too.

4. I want Olivia to admit she loves Fitz. Because she does. And he built her a house. Really.

I really hope this next half of the season will be as good as the show has been in the past! I want more of the awesome stuff that got me addicted in the first place! Anyone else have any hopes for the shows they watch that will be returning soon?