This is the question that was posed to Kansas 7th and 8th grade students, who were invited to submit essays on the topic for a chance to win a $2000 Learning Quest 529 account and $1000 for their school. Learning Quest is a tax-advantaged 529 college savings plan administered by Kansas State Treasurer Ron Estes and managed by American Century Investments. Two weeks ago, I was invited to the offices of American Century Investments in Kansas City to help judge this essay contest. 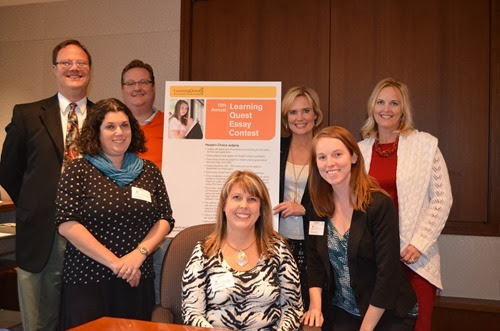 Reading the essays written by the students was very interesting to me. It seemed obvious when the essay writers stated that they would save the money for college. Some went into more detail about how they would save the money while others chose to wrote about why they wanted to go to college or what they wanted to do for their future career. While I found it impressive that 7th and 8th graders knew what they aspired to become as adults, the essays that I found the most well-written were the ones that discussed ways they could use the money today to increase it for tomorrow. For example, some students discussed programs they could attend that would help them gain experience for their intended career. Colleges definitely look favorably on these experiences, so I thought these students were thinking intelligently.

My favorite essay was actually the first one that I read. The student explained his home business of lawn care and stated that he would use the money to buy a bigger and better lawn mower. This would help him finish his lawn jobs quicker and therefore gain him more customers, which he would in turn be able to serve better with the better lawn mower. He calculated how much the lawn mower would cost him and how his better work would make him more money, thus saving up much more than he would have if he had put the $2000 straight into the bank.

Like I said, it was very interesting to read the ideas that the students put in their essays. Two winners have already been chose – one from 7th grade and one from 8th grade – but right now there is a People’s Choice award going on for an additional student from each grade to win a $1000 Learning Quest 529 account and $1000 for their school. This means that you too can be an essay judge! There are five essays from each grade level and anyone can vote on them.

Now, back to my original question. What would you do if you were given $2000 to invest in your future? I have been mulling over this question myself and I still haven’t decided what I would do with the money. Maybe I would invest it in my blog to help it grow. Or maybe I would just put it into a retirement account – not very creative, I know! What do you think?