Since I last updated, I finished another four books. 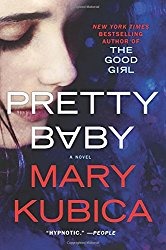 I had heard a lot about Mary Kubica’s books and was happy to get Pretty Baby from the library recently. It was suspenseful and kept me reading!

“She sees the teenage girl on the train platform, standing in the pouring rain, clutching an infant in her arms. She boards a train and is whisked away. But she can’t get the girl out of her head…Heidi Wood has always been a charitable woman: she works for a nonprofit, takes in stray cats. Still, her husband and daughter are horrified when Heidi returns home one day with a young woman named Willow and her four-month-old baby in tow. Disheveled and apparently homeless, this girl could be a criminal—or worse. But despite her family’s objections, Heidi invites Willow and the baby to take refuge in their home. Heidi spends the next few days helping Willow get back on her feet, but as clues into Willow’s past begin to surface, Heidi is forced to decide how far she’s willing to go to help a stranger. What starts as an act of kindness quickly spirals into a story far more twisted than anyone could have anticipated.”

The story that unravels here is not what I was expecting! While I tried to predict parts of the mystery, I was unable to guess at what was really happening. There were multiple viewpoints utilized and understanding what the characters went through in the past helps to see them as they are now. 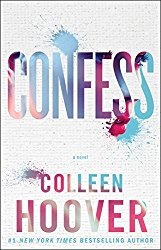 Confess was the second book by Colleen Hoover that I had at the same time from the library. Last time I mentioned how all of her books follow a similar format of a strong woman whose only flaw is falling for a complicated guy. The plot of this book was similar, although in this case, the woman has a secret as well.

“At age twenty-one, Auburn Reed has already lost everything important to her. In her fight to rebuild her shattered life, she has her goals in sight and there is no room for mistakes. But when she walks into a Dallas art studio in search of a job, she doesn’t expect to find a deep attraction to the enigmatic artist who works there, Owen Gentry. For once, Auburn takes a chance and puts her heart in control, only to discover that Owen is keeping a major secret from coming out. The magnitude of his past threatens to destroy everything important to Auburn, and the only way to get her life back on track is to cut Owen out of it.
To save their relationship, all Owen needs to do is confess. But in this case, the confession could be much more destructive than the actual sin.”

Actually, Owen is not quite as damaged as the other male characters in the Hoover books I have read. His secret involves doing what he thinks is right, rather than covering up something awful he did in the past. I enjoyed the use of art in this book, as Hoover actually had an artist design the art pieces she described as done by Owen. Also, the confessions that are included in the book are interesting – they show that plenty of people have what to hide. Owen and Auburn make a good couple, once they allow each other to know their truths! 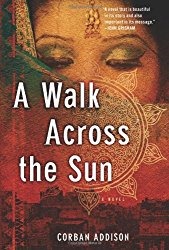 A Walk Across The Sun by Corban Addison was recommended to me by one of my book group friends. The novelization of a complex and heartbreaking issue opened my eyes to something I knew little about. There were times however that I wished the story read more like a novel and less like a news report.

“When a tsunami rages through their coastal town in India, 17-year-old Ahalya Ghai and her 15-year-old sister Sita are left orphaned and homeless. With almost everyone they know suddenly erased from the face of the earth, the girls set out for the convent where they attend school. They are abducted almost immediately and sold to a Mumbai brothel owner, beginning a hellish descent into the bowels of the sex trade. Halfway across the world, Washington, D.C., attorney Thomas Clarke faces his own personal and professional crisis-and makes the fateful decision to pursue a pro bono sabbatical working in India for an NGO that prosecutes the subcontinent’s human traffickers. There, his conscience awakens as he sees firsthand the horrors of the trade in human flesh, and the corrupt judicial system that fosters it. Learning of the fate of Ahalya and Sita, Clarke makes it his personal mission to rescue them, setting the stage for a riveting showdown with an international network of ruthless criminals.”

I appreciated that Addison wrote about this important topic. I think it could have read easier and the characters could have been developed better, but it is an important book that I’m glad I read. 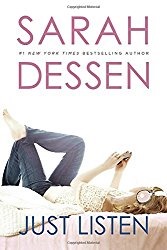 Gabbie got Just Listen by Sarah Dessen as a free gift from the library this summer when she joined the summer reading program and she passed it on to me to read. I don’t think it is necessarily appropriate for a young teen like Gabbie, as Dessen’s books often address mature issues that teenagers face and this book was no different.

“Last year, Annabel was ‘the girl who has everything’ — at least that’s the part she played in the television commercial for Kopf’s Department Store. This year, she’s the girl who has nothing: no best friend because mean-but-exciting Sophie dropped her, no peace at home since her older sister became anorexic, and no one to sit with at lunch. Until she meets Owen Armstrong. Tall, dark, and music-obsessed, Owen is a reformed bad boy with a commitment to truth-telling. With Owen’s help, maybe Annabel can face what happened the night she and Sophie stopped being friends.”

As an adult, this wasn’t a book full of surprises or new information, but for teens I think it could be an important read. I also liked how Dessen tied in the idea of listening to music without judging and how this skill can be used to listen to friends or family members when they try to tell you what really happened.