When given the choice of doing the smart thing or the right thing, which do you choose? 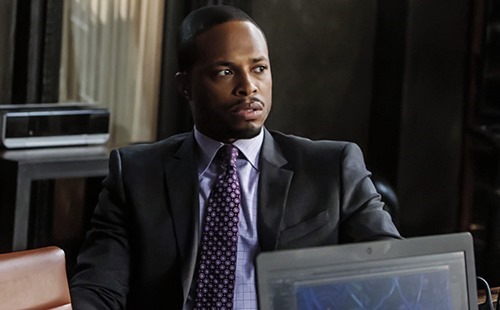 Marcus Walker has officially joined the OPA team. He doesn’t want to at first, because he doesn’t like the way they handle things, but he decides that he needs to in order to help Olivia, who is currently being torn apart in the media. He is immediately told by Huck that there are no arguments, and the plan is to insist that Olivia is busy working and that everything is just fine. Marcus steps up though, and does what no one else has done before – he defends Olivia. The right thing. He explains:

“I was in line at the grocery store this morning, there was a couple in front of me. White, mid-sixties, the wife’s looking at a picture of Liv, and the husband’s going on and on about how angry Liv looks, how he totally believes that she took advantage of the President, because she looks conniving and power hungry. But the wife, God bless her, defended Olivia by saying ‘she must be pretty sharp if she pulled herself up by her bootstraps and make it out of the ghetto.’ Olivia went to one of the most expensive boarding schools in Europe!!”

Before this episode, I did not know what dog-whistle politics meant. Even after I looked it up, I didn’t understand. But Marcus explains it perfectly:

“On this network alone, Olivia Pope has been described as lucky, sassy, ambitious, well spoken, well mannered, articulate, shrill, calculating, overconfident, secretive, urban, hot blooded, known to use thug politics, arrogant,  a siren. Words like these mean nothing to the general public, which is why the media, and I’m including you in there Claire, can get away with using them. But when women of color like Ms. Pope hear that kind of coded language, they know exactly what you’re getting at.”

Dog whistle politics is “racism, sexism, antisemitism, misogyny-it’s bigotry in the form of a language so coded that only the person it’s targeting is insulted by it-like a dog whistle.” By bringing this up, Marcus succeeds in changing the narrative.

Senator Grant: Mellie is approached by a group of women Senators who give her the heads up that Fitz could be impeached. Apparently it is up to her to decide whether to move forward with that plan. Mellie certainly knows that any investigation of Fitz would likely implicate her as well, and Mellie is not sure this plan would be smart. Cyrus thinks it is, because if Fitz is impeached it could help Mellie’s own chances at becoming President, but oops! Cyrus would be implicated along with Fitz too! After a sweet moment of playing hide and seek with Teddy, Mellie and Fitz agree to refrain from hurting each other. The right thing, and probably the smart thing too. 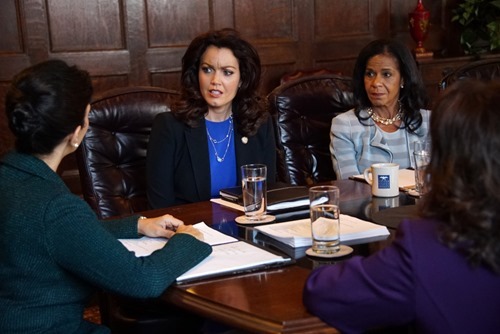 President Grant: Meanwhile, Fitz is also approached with the possibility of his impeachment. He offers to help the Senators with whatever they may need if they agree not to impeach him, but the head of the crew tells him that what they really need is for him to get rid of the Brandon Bill – the bill meant to stop police brutality – Fitz’s legacy. He also tells Fitz that if he chooses to cheat on his wife, he should choose someone more appealing to the Republican base. When he asks Abby what she thinks Olivia would do in this case, she tells him that if he wants to avoid impeachment, he’ll have to kill the bill. The smart thing. However, Fitz realizes that he doesn’t always need to do the smart thing. Although we don’t know yet what he decided, he seems determined to follow his heart. 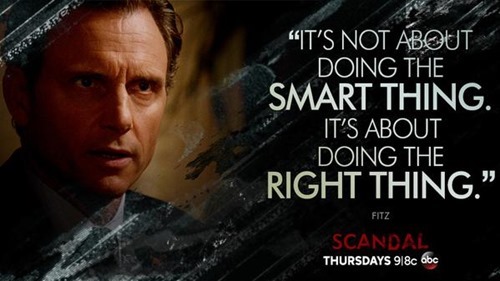 Olivia: What has been going on with Olivia this whole episode? Well, she’s watching a report about her life. It claims that she always wanted to work at the White House and ultimately fulfilled this goal by sleeping her way to the top. She’s also searching for herself on the Internet. She sees that people want to kill her and rape her.

She finally confides in Fitz on the phone and asks him “Do you think if I told them I own a gun, and that I’ve shot someone they’d threaten to rape me? Do you think if I told them I’ve survived being kidnapped and tortured they would get that their weak little misspellings barely make me blink? That I would welcome the chance to take out a little bit of PTSD on the next man who put his hands on me?” Fitz obviously feels awful hearing how she is feeling, and also helpless, until his talk with Abby. And in this case, he decides that the right thing is to go to Olivia, to be there for the woman he loves, and to take her out of her apartment and away from her TV and her computer.

Doing the right thing for Olivia is probably not the smart thing for himself though, as Mellie goes back to the group of women Senators and agrees to move forward with impeachment. Apparently, she is no longer doing the smart thing or the right thing, and the implications of what both she and Fitz did at the end of this episode will continue to be interesting as the season goes on!

If you watched this episode, what did you think?