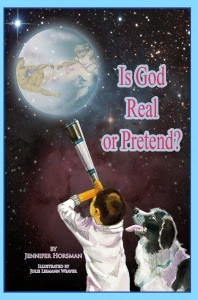 I received this book from TLC Book Tours for my review. “Is God Real or Pretend? is the story of young Franklin’s engaging and enlightening journey to answer this age old question. Franklin’s grandmother, Dr. Wendy Knowles, a professor of astronomy, first provides Franklin with the basic scientific means of determining what is real and what is not and how science distinguishes questions it can answer and those it cannot. Franklin’s mission of discovery continues as he meets a kindly professor of Greek mythology who offers a historical-cultural prospective on the question. Here Franklin meets the Greek Gods and their timeless myths. Once armed with these new ideas, Franklin meets with representatives of the world’s five major religions: Hindu, Buddhist, Jewish, Christian and Muslim. These knowledgeable teachers from each of the great religions charm and delight as they shine positive lights on their religion. Franklin asks probing questions, while learning to appreciate and admire the diversity and beauty of these religious beliefs and traditions. Ultimately, Franklin’s dynamic school report on the immensity and magnificence of the universe becomes the backdrop for thinking critically about religion and questions about God. This book is designed for anyone and everyone, young and old, religious or not, who wants to know more about these five great religions. It’s the most unforgettable and exciting journey, one every thoughtful child (and the curious adults in their life) will enjoy.”

Is there really a God? Personally, I have asked myself this question more than a few times. On the other hand, my children have not. They have been taught without question in the existence of God, who created the world, who spoke to our forefathers, and who we pray to daily. Even so, Gabbie (age 8.5) was very interested in reading this book, in order to learn about what other people believe.

The book begins with what I see as a major issue – the existence of Santa Claus. Like most everyone in America, the book assumes the reader celebrates Christmas. Yet, on the very first page, Franklin realizes that Santa Claus, like the Easter Bunny and the Tooth Fairy, is not real. If you want your children to believe in any of these things, you do not want to read them this book. Poor Franklin. With his believe shattered, he starts to question. If Santa Claus isn’t real, is God real?

Franklin begins a journey to learn about various world religions and what they believe about God. Lucky for him, he has a grandmother willing to teach him all about science, and how it is hard to prove something you cannot see or touch. To her, God cannot be real because feelings do not prove the existence of something. However, she is willing to introduce Franklin to a professor of Greek civilizations who starts out Franklin’s research with information about the Greek gods. In this section, Franklin learns that the Greeks believed in many gods, just as people today believe in other gods.

Next, Franklin learns about the Hindu religion, because they also believe in many gods. Franklin learns that “most Hindus believe God is the universe…Brahman, which is what Hindus call God, is everywhere…God is in your and me. In the stars. In the planets. In the oceans, mountains, and forests. God is in all living creatures.” This doesn’t sound all that different to my own beliefs! However, he goes on to learn that Hindus believe in three manifestations of God –  which are represented by statues – Brahma the creator, Vishnu the preserver, and Shiva the destroyer. He also learns that while he doesn’t think the statues look like real gods, the “Hindu religion is much bigger than a single statue.”

From there, Franklin learns about Buddhism. He quickly learns that Buddhists think it is more important to live in the best way possible than to worry about questioning God. He goes on to learn about the rules of the Eightfold Path, which is a list of rules Buddha made to help people end suffering by becoming better people. Having learned about the Buddhist religion, but not whether or not God is pretend, Franklin moves on to learn about Judaism.

Being the religion that I know the most about, the way the chapter on Judaism is written gives me an idea on how much is correct in the other chapters. What stood out to me is that the rabbi that Franklin speaks with tells him “almost half of all Jews in America do not believe in God.” Shocking. Franklin questions whether a person can still be Jewish without believing in God, and the rabbi answers “yes they can…Jewish people feel that following God’s commandments and rules are what’s important.” This poses a problem for me – if they don’t believe in God, why would they follow God’s commandments? If God isn’t real, doesn’t that make the commandments and rules pointless? This question does not bother Franklin or the rabbi though, and they go on to discuss the history of Judaism, the believe that Jesus existed historically but was not the son of God, and the story of Moses and the ten plagues. Franklin feels that the story of Moses appears to be a pretend story. The rabbi appears to agree with him, saying there is no evidence that the Jews were even in Egypt at the time, but that it doesn’t matter because the story is a good one. Franklin also discusses praying with the rabbi, who notes that “even if there is no God, or if God is not listening to your prayers, the act of praying helps people,” the kosher laws, which the rabbi says protect animals from inhumane treatment, that Jews do not believe in reincarnation, and that history, especially the Holocaust, is very important in Judaism today. They end their conversation by noting that “we must understand our history, what terrible things happened in the past, in order to make sure it never happens again. We must teach our children to respect all the religions of the world.”

Next, Franklin discusses Christianity. He raises the question of whether heaven is real or pretend. Once again, his grandmother brings up science and how nothing exists outside of the universe. His mom, on the other hand, believes that God created the universe, so he must exist outside of nature. Finally, Franklin learns about Islam. Having already learned about the other world religions, he compares and contrasts Islam with the others he has already learned about, realizing that all of the religions provide rules to live by. The difference he sees with Islam is that their rules mostly command them to worship Allah. He wonders why God wants people to worship him, as Franklin sees this concept in Judaism and Christianity as well. The last thing Franklin learns is that people need faith to believe in God. Faith means to believe in something “without logical proof, science, or evidence.”

Franklin goes on to present a report to his school class about the solar system. His class discussion veers off into discussion on whether God created the universe, which leads his grandmother to introduce the big bang theory. This of course is meant to show that the universe could exist without God. The book concludes with Franklin acknowledging that he liked things about each of the religions he learned about, but most of all he likes that science can answer his questions. He seems to conclude that God is mysterious, but science is not.

For me, as a religious person, this is not the conclusion I would want my children to reach. I have no problem with them learning about other religions, and what Franklin learns about religions is certainly interesting. However, seeing that the information about Judaism seems to be skewed towards those who don’t believe in God, I’m not sure I can accept the information on the other religions at face value either. 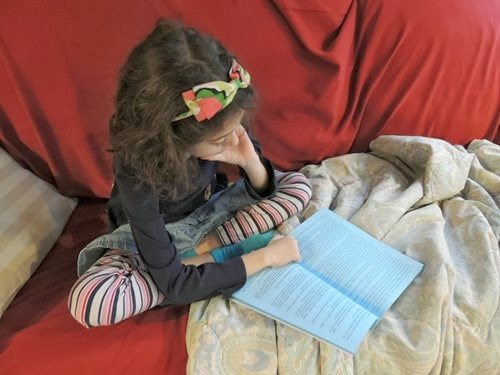 Now, let’s look at Gabbie’s thoughts on the book. I asked her a few questions and here are her exact answers:

What did you like about it? It was interesting.

What was it about? Different religions. The boy in the book likes science. His name is Franklin. He does believe that the Earth may not be made by God, but he likes learning about other religions. He thought it was confusing to understand, it is hard to understand that God made the world.

Do you think God made the world? Of course I do. Because that’s what our religion believes.

Did you learn anything? I learned about other religions.

Is God real or pretend? Depends on what religion.

Can you give me examples? Hindu, Buddhist, Jewish, Christian and Muslim all believe in God.

Is there anything you didn’t like about the book? No.

Do you think other people should read this book? Yeah, my age and older, because you need to understand it. You have to be interested in history and stuff.

It is beautiful to me that even after reading this book Gabbie still has a strong belief that God made the world. If your child has strong faith, this book may be worth reading as a learning tool about other beliefs. However, if you believe in God and your child is questioning, I would not recommend this book as an answer.