The day finally arrived – my iPhone 5 was scheduled to be delivered! Making sure I was here most of the day, it was not a big surprise to me when the FedEx notice arrived on my door after I’d been gone for 1/2 an hour to pick Zachary up at school. (Of course!) The notice directed me to the FedEx pick up center, so I knew where I’d be heading at 5 PM! Let’s just say that picking it up was the easy part.

The challenge of this new device in my life is having to combine my iPod Touch and my cell phone into one without losing anything. I have been using my iPod Touch pretty constantly since I got it without much time spent on organizing, which means that the apps I’ve downloaded (almost always for free!) remained part of my iPod even if I never used them! So the first thing I did was try to remove the apps I’m not using. Now that my iPod is going to be Gabbie’s, I needed to remove all the apps that she will not be using. I was able to do this inside iTunes by clicking on my iPod and choosing apps. I removed the checks in the boxes next to the apps I did not want to add to the iPod. I also rearranged the apps that remained so that they were all on the first 2 screens. 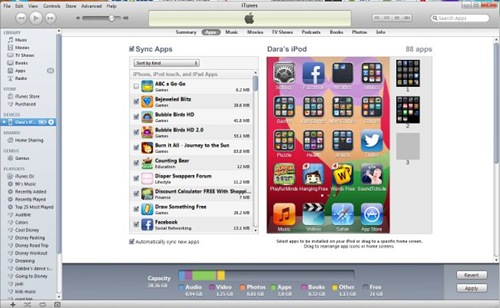 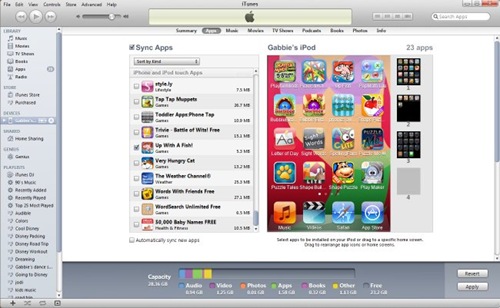 Getting my phone all transferred to the iPhone was easy. I already had my contacts backed up so transferring them to the new phone was simple. Transferring my phone number and account took 3 phone calls – one to the number provided, one to my father-in-law who is the main account holder on our family plan, and one back to the number provided. Getting my apps and my iTunes transferred proved to be more of a difficult process.

Here is what I learned: choose that you want your iPhone to be a new device – not a restore of your iPod! I accidentally mirrored my iPod and that isn’t how I wanted to set up the iPhone. So I tried to restore it – you’d think that would be simple, but it had to download a restore file and during the download, my internet stopped working for no apparent reason. I could not get my modem to restart and had to call the cable company (my house phone stopped working too!) and after being on the phone for half an hour, they said they couldn’t help me and would send someone out the next day at 3PM! I was a little bit annoyed. However, based on a few things said in the conversation, I reset my modem myself. (I had to take out the battery as well as unplug everything). After that I finally got my iPhone set up the way I wanted it to be! 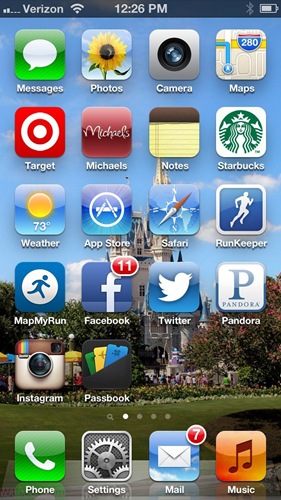 As a side note, if you ever want to play a cool trick on someone, take a screenshot of their main screen (press the home button and the on/off button at the same time) and then leave the iPhone set to the photo instead of the screen. Person will be confused.