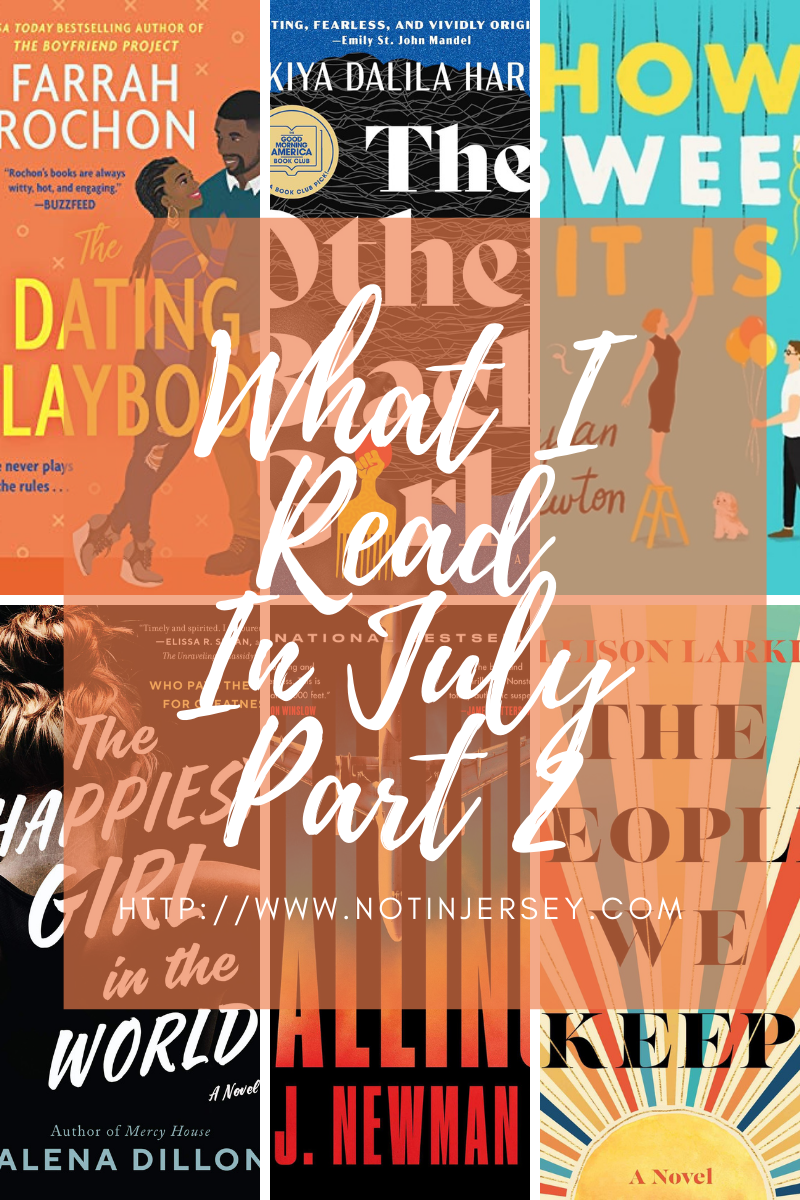 Today’s post covers the second half of the books I read in July 2021. I shared the first half of the books I read here. My top books of the month can be found here. I will be linking up this post with the Show Us Your Books Link Up, and the Amazon links to the books I’ve read are affiliate links and if you use them and make a purchase, I may receive a small commission. If you’ve read any of these books or are interested in them, I’d love to hear about it in the comments! 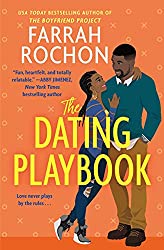 Title: The Dating Playbook
Author: Farrah Rochon
Genre: Rom Com
Publisher: Forever, 8/17/21
Source: Publisher via Net Galley
Why I Read It: Sent to me for my review
My Rating: 4 Stars

This is the second book in The Boyfriend Project series but it could be read as a stand alone. It was a quick read about Taylor, a personal trainer, and Jamar, a football player, who being fake dating to hide that she is working with him to stage a football comeback.

“When it comes to personal training, Taylor Powell kicks serious butt. Unfortunately, her bills are piling up, rent is due, and the money situation is dire. Taylor needs more than the support of her new best friends, Samiah and London. She needs a miracle. And Jamar Dixon might just be it. The oh-so-fine former footballer wants back into the NFL, and he wants Taylor to train him. There’s just one catch—no one can know what they’re doing. But when they’re accidentally outed as a couple, Taylor’s game plan is turned completely upside down. Is Jamar just playing to win . . . or is he playing for keeps?”

I appreciated that this book included more scenes with the three friends than were in the first book in the series. I also liked the forbidden love type trope as the two tried to deny their feelings for one another. The book also covered themes of loss and learning disabilities. One thing that bothered me was the ship name that Taylor chose – TayJar. It should be TayMar or TayJam, TayJar doesn’t make any sense! 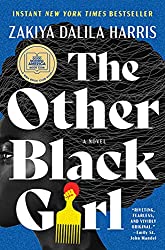 Title: The Other Black Girl
Author: Zakiya Dalila Harris
Genre: Contemporary Thriller ish
Publisher: Atria, 6/1/21
Source: Publisher
Why I Read It: Sent to me for my review / Buddy Read
My Rating: 4 Stars

I am not really sure how to review this book without giving too much away! It starts as a commentary on being the only Black person working at a publishing company but somewhere in the middle it becomes something else entirely.

“Twenty-six-year-old editorial assistant Nella Rogers is tired of being the only Black employee at Wagner Books. Fed up with the isolation and microaggressions, she’s thrilled when Harlem-born and bred Hazel starts working in the cubicle beside hers. They’ve only just started comparing natural hair care regimens, though, when a string of uncomfortable events elevates Hazel to Office Darling, and Nella is left in the dust. Then the notes begin to appear on Nella’s desk: LEAVE WAGNER. NOW. It’s hard to believe Hazel is behind these hostile messages. But as Nella starts to spiral and obsess over the sinister forces at play, she soon realizes that there’s a lot more at stake than just her career.”

While some parts were slower in the middle, this book contained many layers, including microaggressions, satire, and a discussion of the relationship between Black women. I have seen some mixed reactions, but our buddy read group overall found it worth reading. 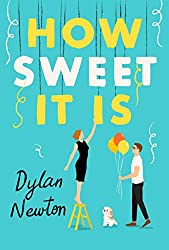 Title: How Sweet It Is
Author: Dylan Newton
Genre: Rom Com
Publisher: Forever, 7/13/21
Source: Publisher
Why I Read It: Sent to me for my review / Buddy Read
My Rating: 4 Stars

This was a very sweet read about a wedding and event planner who is recruited to organize a book launch for a horror writer. Drake is a super famous writer and although he is only known for horror, he is inspired to write a historical romance.

“Event planner Kate Sweet is famous for creating the perfect happily-ever-after moment for her clients’ dream weddings. So how is it that her best friend has roped her into planning a bestselling horror writer’s book launch extravaganza? But the second Kate meets—or rather, accidentally maims—the drop-dead-hot Drake Matthews, her well-ordered life quickly transforms into an absolute nightmare. Drake Matthews is tired of the spotlight and tired of his reputation as the Knight of Nightmares. He’s really a nice guy! But he’s not prepared for Kate, a fearless agent of chaos in steel-tipped stilettos, or for that sweet sting of attraction he feels for her. She’s inspiring him to take his writing in a whole new direction—one that no one expects. Because now Kate and Drake are changing up the rules, and this plot twist might just surprise everyone . . . including themselves.”

The meet cute in this book was hilarious! The family members and friends in the book were great and Kate and Drake were a fun couple to root for! 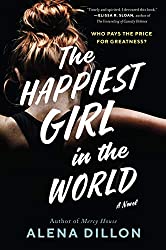 Title: The Happiest Girl In The World
Author: Alena Dillon
Genre: Contemporary
Publisher: William Morrow, 4/20/21
Source: Publisher
Why I Read It: Sent to me for my review / Read during Olympics
My Rating: 4 Stars

This book is a fictionalized depiction of the trauma that elite gymnasts face just by mastering their sport physically, not to mention the emotional trauma that has ensued due to abusive coaches and the predatory doctor whose name was changed in this book but was sadly very real. If you want to read a non fiction account of what too many of these young girls experienced and how the culture of the sport allowed the abuse to happen, I recommend The Girls by Abigail Pesta.

“For Sera Wheeler, the Olympics is the reason for everything. It’s why she trains thirty hours a week, starves herself to under 100 pounds, and pops Advil like Tic Tacs. For her mother, Charlene, hungry for glory she never had, it’s why she rises before dawn to drive Sera to practice in a different state, and why the family scrimps, saves, and fractures. It’s why, when Sera’s best friend reports the gymnastics doctor to the authority who selects the Olympic Team, Sera denies what she knows about his treatments, thus preserving favor. Their friendship shatters. But Sera protected her dream—didn’t she? Sera doubles down, taping broken toes, numbing torn muscles, and pouring her family’s resources into the sport. Soon she isn’t training for the love of gymnastics. She’s training to make her disloyalty worthwhile. No matter the cost.”

I thought this book was well done and I liked how it incorporated real current events – it even included the delay of the 2020 Olympics. ⁣Again, it is fiction, but it provided much insight into the mind of an elite gymnast, as well as to her mother and others in her life. 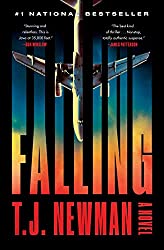 Falling was full of suspense and the narration of this audio book was great. A pilot has to choose between crashing his plane or saving his family from a kidnapper. As the story goes on, you get to know the various players and enter into the minds of those involved.

“You just boarded a flight to New York. There are one hundred and forty-three other passengers onboard. What you don’t know is that thirty minutes before the flight your pilot’s family was kidnapped. For his family to live, everyone on your plane must die. The only way the family will survive is if the pilot follows his orders and crashes the plane. Enjoy the flight.”

I loved the flight crew and the pilot and his family. Some of the reasoning behind the situation wasn’t that easy for me to understand and there were things that raised questions for me. It wasn’t until I read some other reviews (with spoilers) that I understood why I felt that way. I will say that I think this book, written by a flight attendant, was sort of a 9/11 retelling fantasy in which the flight crews and pilots were prepared for an attack. Also, this book was like the movie Speed on a plane! 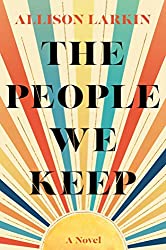 Title: The People We Keep
Author: Allison Larkin
Genre: Contemporary Fiction
Publisher: Gallery Books, 8/3/21
Source: Publisher
Why I Read It: Sent to me for my review
My Rating: 5 Stars

The People We Keep by Allison Larkin is a beautiful and well written book about April and how she meets and keeps people on her journeys.

“Little River, New York, 1994: April Sawicki is living in a motorless motorhome that her father won in a poker game. Failing out of school, picking up shifts at Margo’s diner, she’s left fending for herself in a town where she’s never quite felt at home. When she ‘borrows’ her neighbor’s car to perform at an open mic night, she realizes her life could be much bigger than where she came from. After a fight with her dad, April packs her stuff and leaves for good, setting off on a journey to find a life that’s all hers. Driving without a chosen destination, she stops to rest in Ithaca. Her only plan is to survive, but as she looks for work, she finds a kindred sense of belonging at Cafe Decadence, the local coffee shop. Still, somehow, it doesn’t make sense to her that life could be this easy. The more she falls in love with her friends in Ithaca, the more she can’t shake the feeling that she’ll hurt them the way she’s been hurt. As April moves through the world, meeting people who feel like home, she chronicles her life in the songs she writes and discovers that where she came from doesn’t dictate who she has to be.”

April is a neglected child at age 16 and she decides to set off on her own. She manages to find work and places to stay and while some of what she does is quite dangerous and deceptive, I couldn’t help but fall for her story. The people she meets along the way play a huge part in her survival and I really felt for her and for them whenever she had to move on. The book follows April as she moves up and down the east coast, playing guitar and writing songs, getting older but still needing the parenting she never received as a child. I thought the ending was beautiful as well. ⁣

This concludes my July reads, with 6 books in addition to the ones I covered in previous posts. Overall, in July I read 15 print books, 4 ebooks, and 5 audio books! I share my monthly reading wrap ups with stats on my Instagram each month!

Have you read any of these books or do you want to? What have you been reading lately?