Seems like it’s been a book themed week here on the blog with all the book tours I had scheduled! The book I’m featuring today is Groomed by Elizabeth Melendez Fisher Good on the tour hosted by TLC Book Tours. Because of the book’s content, I feel like this post will be a little deeper than my regular book reviews. Please read on for my review and discussion of Groomed. 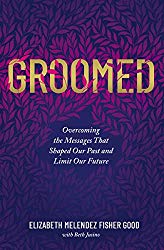 Title: Groomed: Overcoming the Messages That Shaped Our Past and Limit Our Future
Author: Elizabeth Melendez Fisher Good
Genre: Non-Fiction / Self-Help
Publisher: Thomas Nelson, 1/14/2020
Source: TLC Book Tours
Why I Read It: Sent to me in exchange for my review.
My Rating:  3 Stars

I very rarely read self-help books and likely would never have picked this book up if it had not been sent to me. I thought it was about the author’s organization that rescues victims of sex trafficking, and that is discussed in the book, but it is also a discussion of all the various ways people may be groomed into who they are and how they see themselves.

“Someone in your past sold you a false story about who you are and what you’re worth. It has been holding you back for too long. Take control of your future.

A staggering one out of three women in America was a victim of sexual abuse at some point in her childhood. No matter how many years it’s been, if that’s your story, those scars are probably still with you. But even if that’s not part of your story, this book is for you. Women today have been groomed for a lot more than just sex. Using her own story of abuse, family tragedy, and rebellion, Elizabeth Melendez Fisher guides readers toward an understanding that grooming is oftentimes subtle, but it’s always life-altering. In Groomed Fisher incorporates the language and lessons gained over the past decade working with sex trafficking victims and her work in ministry and counseling before that. She draws out five specific ways that women have been groomed, from physical appearance to spirituality to finances, and shows how those manipulative messages have affected the way we see our worth and how they’ve oftentimes stifled and limited us. From there Fisher offers readers a way to overcome their past, starting with the all-important but rarely explored idea of a selah, or a time of rest and reflection, and exploring active ways to forgive and move forward to a new level of freedom. No one has to be defined by her past. No one has to live for her groomers. It’s time to take a look back at where we came from to escape the messages of our past and take control of our future.”

This book attempts to universalize the concept of being groomed and it addresses ways you may have been groomed in your past – for appearances, to be invisible, for judgement, to endure, and for financial fear. While it is true that most of us can pinpoint times we were hurt in our childhoods, whether by adults close to us or bullies at school or otherwise, I thankfully did not find that I identified with any of the types of grooming that the author describes. It is certainly worth thinking about the behaviors that you or the women you know may display and helpful to understand what they may have gone through in their pasts that make them who they are today.

The book offers opportunity for reflection and ways to move forwards from the hurts of the past. It includes religious pieces and the concept of Selah, which means to pause, and is the name of Fisher’s organization. Selah Freedom is an organization that raises awareness and aims to end sex trafficking and bring freedom to the exploited. You can find more information and resources on their website.

While I wouldn’t say this book was necessarily meant for someone like me, it may be an important resource for someone who has been struggling.