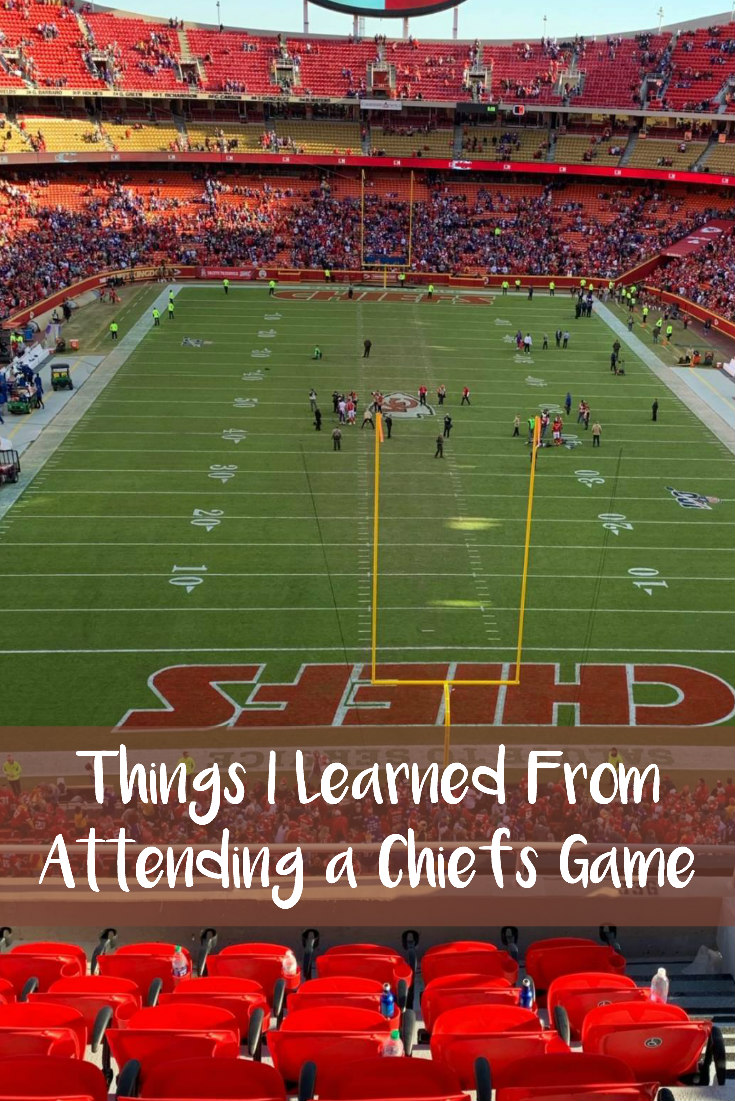 This past weekend, Dave and I were lucky enough to score Chiefs football tickets. At the moment, they are pretty expensive, so when a friend was selling a pair for less than face value, I was excited to grab them. I have been a fan of football since I was a kid, as my dad would watch and cheer for the Giants and he taught me the rules of the game. I am always the one in the family that my kids (and husband) ask to explain certain plays and rules while we watch the games at home! While I still have some allegiance to the Giants, I do consider myself a Chiefs fan now, and it’s great, because as a team, they are doing pretty well! Plus our quarterback is arguably the best in the league, although he wasn’t playing this week due to his knee injury. 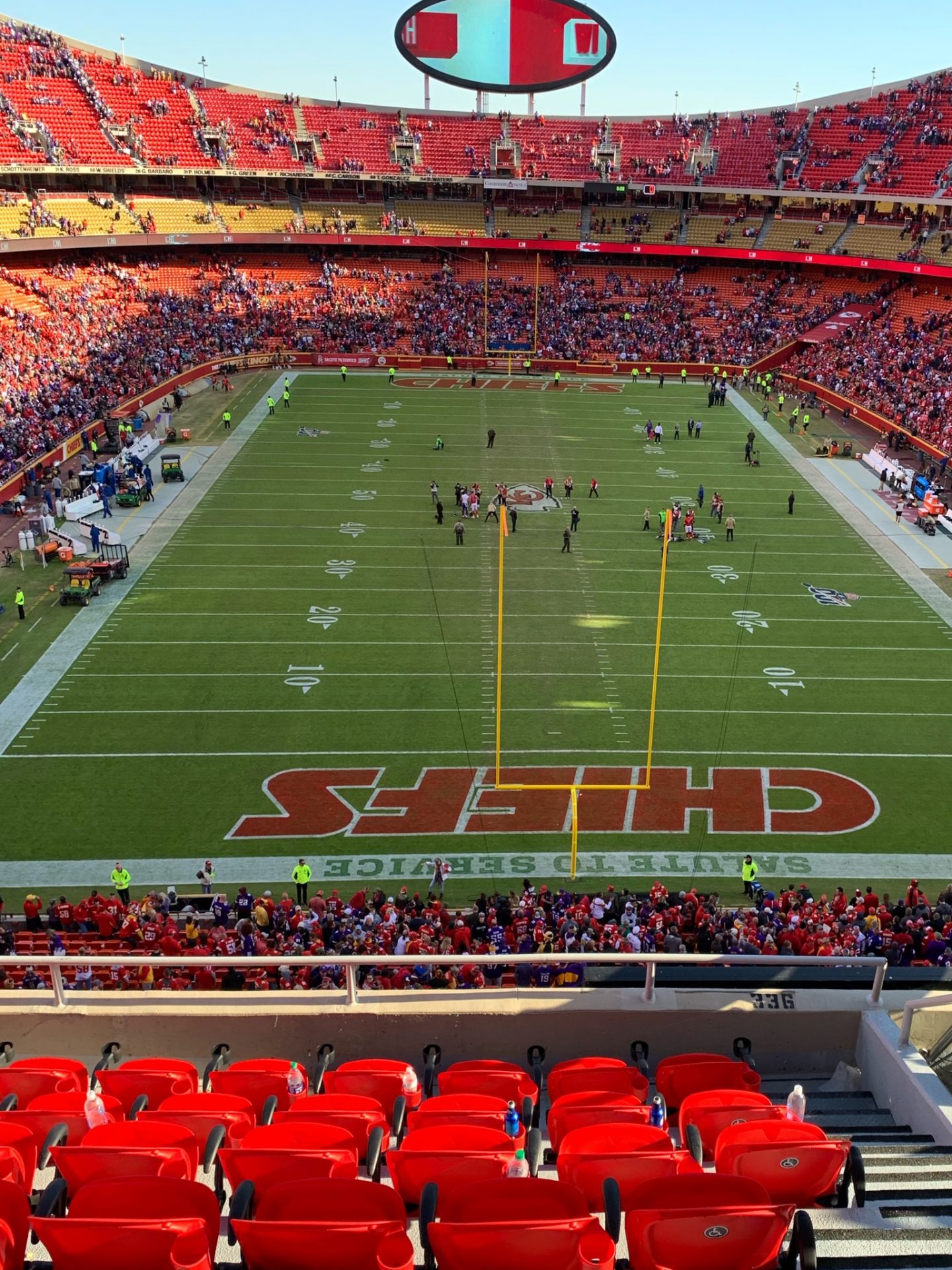 While I have been to many baseball games and college football games, I am pretty sure this was my first pro football game and there is definitely a culture that I didn’t know about before attending! Here are some of the things I learned. 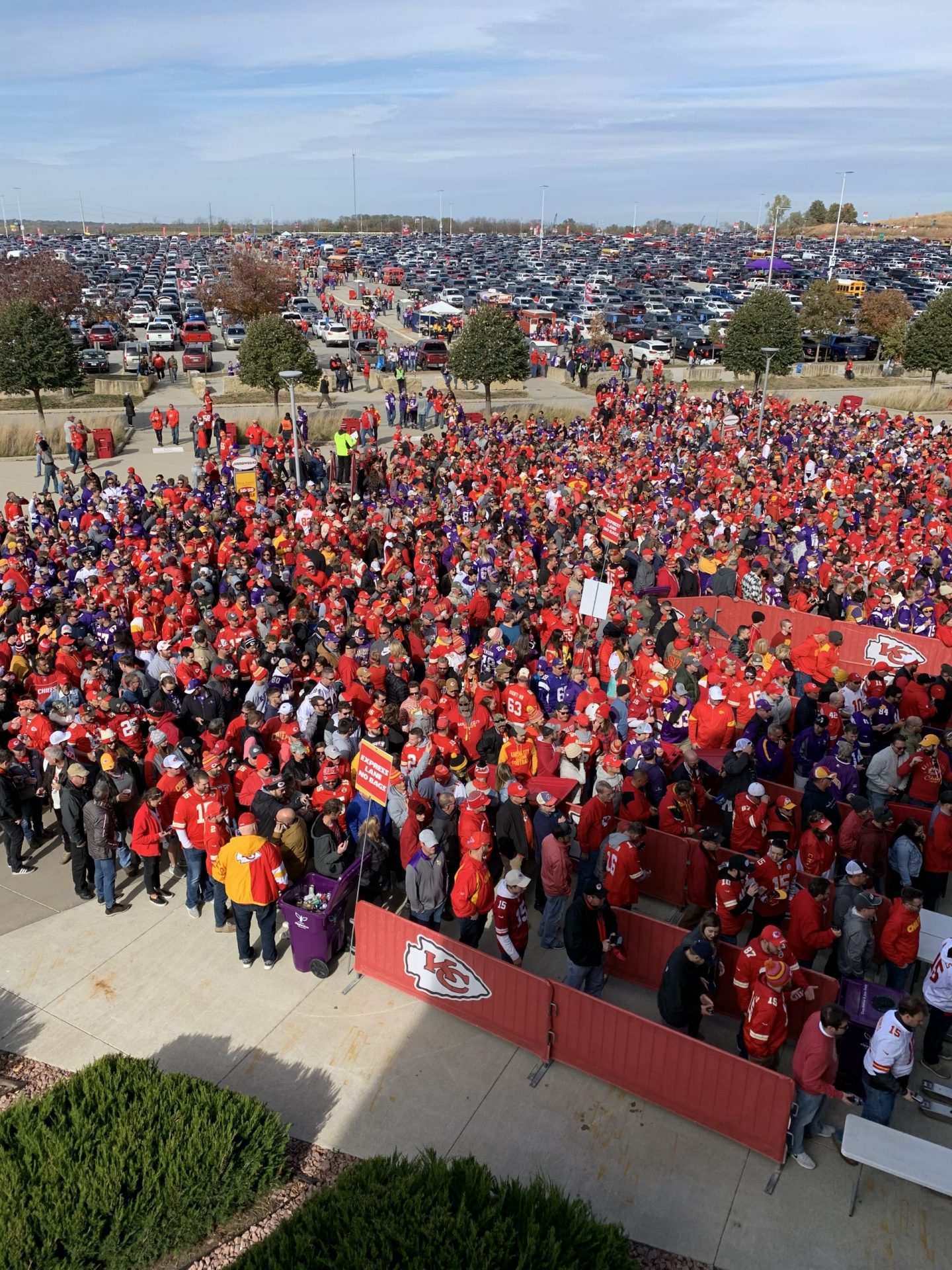 1. You can’t bring a bag to the game. I knew this and I knew to check what was allowed in before attending. You can bring a clear plastic bag, but no food is allowed in and neither are cameras with removable lenses. Therefore, I only brought my phone. I am glad I knew that ahead of time! Also, you can bring a bottle of water, but it has to be sealed. Silly me, I was thirsty in line to enter and cracked open my bottle. Bye bye bottle!

2. Parking is expensive! I don’t know what it’s like in other cities, but here it is $15 to park at baseball games and $60 to park at football games – and the two stadiums share a parking lot! If you book your parking online ahead of time, you can pay less. We used an app to find a lot to park in, but the roads were all closed and we couldn’t get to that lot, so we ended up in one just across the road from the actual stadium parking which was charging $20. It was about a 15 minute walk up the entrance road and across the parking lot, so it’s a good thing I knew not to bring my camera with me, or I would have had to walk all that way back to put my camera in the car!

3. People get drunk at football games. There is a lot of inappropriateness going on and it isn’t as family friendly as baseball games are. Luckily the people sitting near us were well-behaved and not annoying.

4. People high five each other after good plays. Even if they don’t know you. 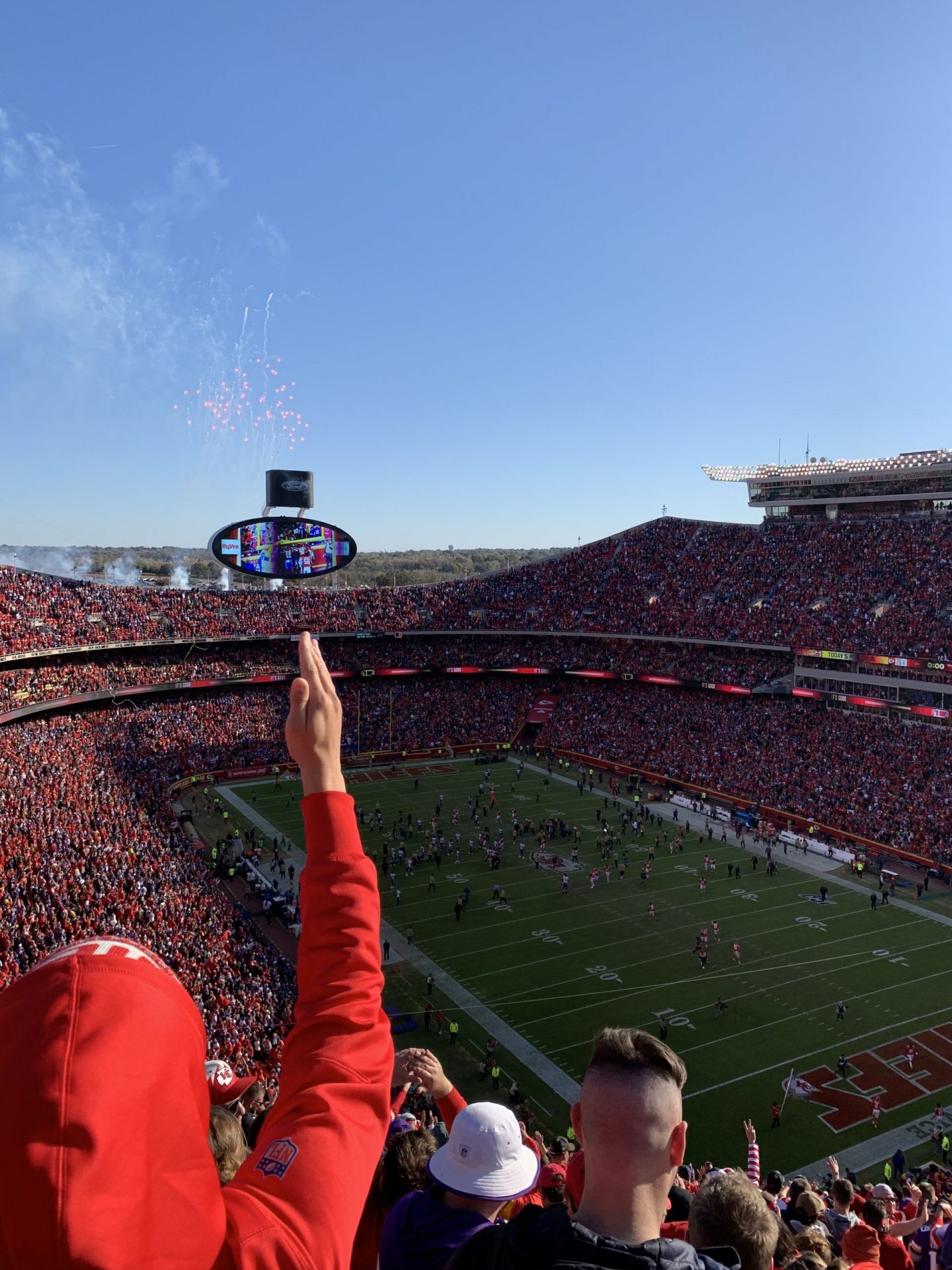 5. Our team does a chant during games and imitates a tomahawk chop while dong the chant. I looked it up during the game because I knew there were cultural problems with doing the motion but I wasn’t sure what the controversy was. First of all, it is obviously an appropriation of Native American culture and has nothing to do with football, but also the chop motion is a reference to scalping. It is considered discriminatory and the Chiefs, as well as the Atlanta Braves, have been asked by Native American groups to stop doing the tomahawk chop. There was an article about this in our local paper just last week. 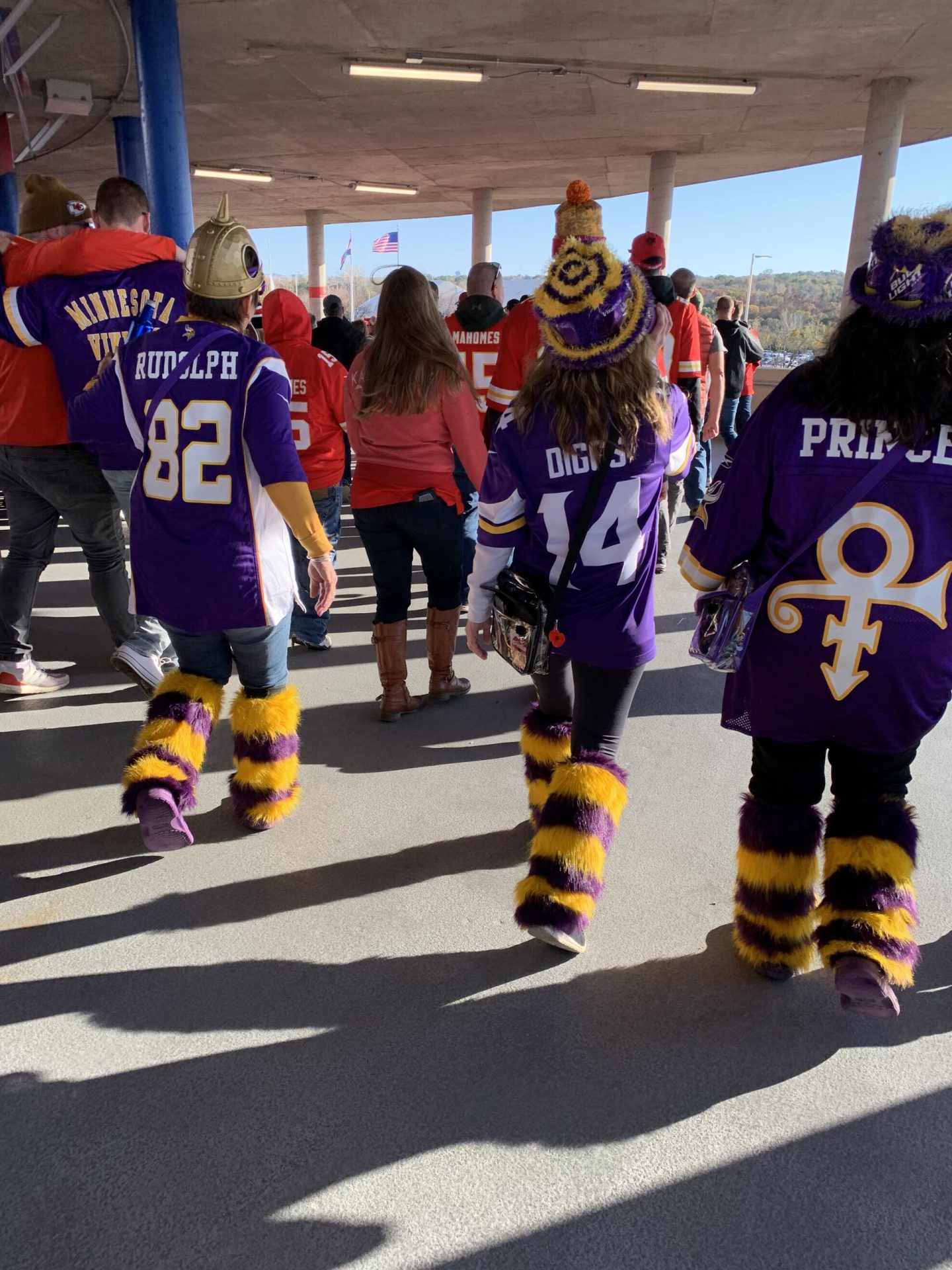 6. People travel for football games. It seemed like it was a 50/50 split between the Chiefs fans and Vikings fans! Apparently the Chiefs team wasn’t very happy about that! What was funny to me was after we won, a lot of Chiefs fans were shouting “Skol” which is what the Vikings say as part of their chant! (It means “cheers.”)

8. You can go for the field goal on the 3rd down at the end of the game. We weren’t sure if you have to wait until the 4th down and if so, we would have been out of time for the attempt!

I definitely enjoyed attending the game, but probably wouldn’t want to be there every single week like the die-hard fans! Have you ever attended a pro-football game?