Time for another update on the books I’ve recently finished reading! 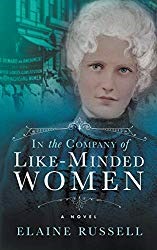 I received a copy of In The Company of Like-Minded Women by Elaine Russell from PR By The Book in exchange for my review. Normally I tend to shy away from historical fiction, but the description indicated that some of the issues experienced by the women in the story in 1901 are similar to the issues that women experience today. I found that this was true!

“In the Company of Like-Minded Women explores the complexities of bonds between sisters and family at the start of the 20th century when women struggled to determine their future and the ‘New Woman’ demanded an equal voice. Three sisters are reunited in 1901 Denver following a family rift many years before. Each sister faces critical decisions regarding love, work, and the strength of her convictions. The success of Colorado women in gaining the right to vote in 1893–twenty-seven years before the passage of national suffrage–and their continued fight for women’s rights, provides the background as the story unfolds.”

I loved that the sisters were active in the suffrage movement and were influential in inspiring others to the cause. The three sisters were all at different life stages and there was a 4th point of view – the daughter of one of them – which added the youngest viewpoint. Lida is a doctor who lost her husband and one child and is now raising a son and a daughter – Sara Jane, who is 14. Lida’s older sister is Mildred, who is married with no children and is the least open-minded of the group. Eva is the younger sister and is interested in a man who Mildred and the mother do not approve of. Through these characters the book gives a real snapshot of life in 1901 in Denver, which I found interesting and worth reading. 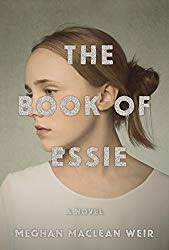 The Book of Essie by Meghan Maclean Weir was recommended by the ladies in my book group and covers a very different topic than books I have read before – a TV evangelical family and the scandals that they hide off screen. The book begins by telling us that Essie is pregnant, but not who the father is.

“Esther Ann Hicks–Essie–is the youngest child on Six for Hicks, a reality television phenomenon. She’s grown up in the spotlight, both idolized and despised for her family’s fire-and-brimstone brand of faith. When Essie’s mother, Celia, discovers that Essie is pregnant, she arranges an emergency meeting with the show’s producers: Do they sneak Essie out of the country for an abortion? Do they pass the child off as Celia’s? Or do they try to arrange a marriage–and a ratings-blockbuster wedding? Meanwhile, Essie is quietly pairing herself up with Roarke Richards, a senior at her school with a secret of his own to protect. As the newly formed couple attempt to sell their fabricated love story to the media–through exclusive interviews with an infamously conservative reporter named Liberty Bell–Essie finds she has questions of her own: What was the real reason for her older sister leaving home? Who can she trust with the truth about her family? And how much is she willing to sacrifice to win her own freedom?”

I loved the relationships that Essie formed for herself with Roarke and Liberty, who has been through her own difficult past with her family involved in a dangerous cult. In a sense, Essie uses both of these new friends, but she knows what she’s doing and she changes their lives too. I liked this book and will have to thank my book group for the recommendation! 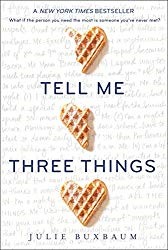 Tell Me Three Things by Julie Buxbaum was on my to be read list and I found it at the library. This young adult novel began with a series of emails that reminded me of Everything Everything, but the story is definitely its own.

“Everything about Jessie is wrong. At least, that’s what it feels like during her first week of junior year at her new ultra-intimidating prep school in Los Angeles. It’s been barely two years since her mother’s death, and because her father eloped with a woman he met online, Jessie has been forced to move across the country to live with her stepmonster and her pretentious teenage son, and to start at a new school where she knows no one. Just when she’s thinking about hightailing it back to Chicago, she gets an email from a person calling themselves Somebody/Nobody (SN for short), offering to help her navigate the wilds of Wood Valley High School. Is it an elaborate hoax? Or can she rely on SN for some much-needed help? In a leap of faith—or an act of complete desperation—Jessie begins to rely on SN, and SN quickly becomes her lifeline and closest ally. Jessie can’t help wanting to meet SN in person. But are some mysteries better left unsolved?”

I will say I figured out the mystery faster than Jessie did, but I think she was trying to convince herself that SN was not the person she may have hoped he was. I really liked the realistic relationships portrayed in this book – Jessie and her new step-mother, Jessie and her father, Jessie and her step-brother, and Jessie and her best friend from back home. Jessie experiences a bully at her new school and I thought the reactions of those witnessing the issue were genuine and well-described. Jessie herself is likeable and forms friendships with three guys who could possibly be SN. She is self-deprecating and doesn’t believe that at least one of these guys wants to ask her out! As far as this being a young adult book, if you like reading about young people, it is enjoyable for adults as well. I would say it is appropriate for upper high school students and it is a good read all around, addressing family, friendship, and love.