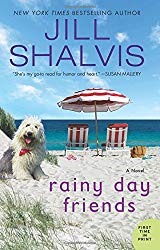 I received a copy of Rainy Day Friends by Jill Shalvis from TLC Book Tours in exchange for my review. While I’m not sure the book contained any rainy days, it definitely contained friends, family, and friends who became like family. It was another lovely and warm summer read! While apparently the second book in a series that takes place in Wildstone, CA, one did not need to read the first book to read this one, as I believe they merely take place in the same town and are not about the same people.

“Six months after Lanie Jacobs’ husband’s death, it’s hard to imagine anything could deepen her sense of pain and loss. But then Lanie discovers she isn’t the only one grieving his sudden passing. A serial adulterer, he left behind several other women who, like Lanie, each believe she was his legally wedded wife.  Rocked by the infidelity, Lanie is left to grapple with searing questions. How could she be so wrong about a man she thought she knew better than anyone? Will she ever be able to trust another person?  Can she even trust herself? Desperate to make a fresh start, Lanie impulsively takes a job at the family-run Capriotti Winery. At first, she feels like an outsider among the boisterous Capriottis. With no real family of her own, she’s bewildered by how quickly they all take her under their wing and make her feel like she belongs. Especially Mark Capriotti, a gruffly handsome Air Force veteran turned deputy sheriff who manages to wind his way into Lanie’s cold, broken heart—along with the rest of the clan. Everything is finally going well for her, but the arrival of River Green changes all that. The fresh-faced twenty-one-year old seems as sweet as they come…until her dark secrets come to light—secrets that could destroy the new life Lanie’s only just begun to build.”

Although the book is mainly told from Lanie’s view point, there are a few chapters that focus on River. Each of these main characters was left to deal with betrayal by the man they had each married. Of course, a man can’t be married to more than one woman, so because Lanie had married him first, River’s marriage was not real. What is real is the fact that River is pregnant. The woman find themselves at Capriotti Winery among a large family full of interesting characters. Mark is a single dad to adorable twins who were abandoned by their mother and attach themselves to Lanie. Mark’s two sisters, one single and one married, provide entertainment and become Lanie’s friends, as much as she tries to keep to herself at first. Their mother proves to be more of a mother than Lanie’s own mother has been – and she makes an appearance too. The family dog is even an adorable character right from the start of the book.

One thing I really enjoyed in the book were the little quotes at the beginning of each chapter about anxiety. They were really cute, funny, and relatable! For example: “The human body is 90 percent water, so basically we’re all just cucumbers with anxiety.” And: “When your anxiety goes away and having no anxiety gives you anxiety.” And one more: “I can be spontaneous, but first I must carefully plan everything and imagine all that could go wrong.”

You can get this book via HarperCollins!