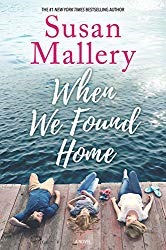 I received a copy of When We Found Home by Susan Mallery from TLC Book Tours in exchange for my review. I have really enjoyed Susan Mallery’s books in the past so I was happy to be offered another to read. I had received the book I’m reviewing next week before I received this one and ended up reading this one this past weekend. I kept worrying I wasn’t going to finish it on time for this review, but it was a quick and enjoyable read so it was no problem!

“Life is meant to be savored, but that’s not easy with no family, limited prospects and a past you’d rather not talk about. Callie Smith doesn’t know how to feel when she discovers she has a brother and a sister—Malcolm, who grew up with affection, wealth and privilege, and Keira, a streetwise twelve-year-old. Despite her trepidation, she moves into the grand family home with her siblings and grandfather on the shores of Lake Washington, hoping just maybe this will be the start of a whole new life. But starting over can be messy. Callie and Keira fit in with each other, but not with their posh new lifestyle, leaving Malcolm feeling like the odd man out in his own home. Becoming a family will take patience, humor, a little bit of wine and a whole lot of love. But love isn’t Malcolm’s strong suit…until he learns that an open heart, like the family table, can always make room for more.”

The book is from a variety of viewpoints – Malcolm and Callie as well as some of their friends. The noticeably left out view points were those of Keira and the grandfather. The reader can understand the feelings of those characters based on how the others interact with them, but I thought it was an interesting choice to not have them featured. There were a lot of characters to get to know in this book and I wonder if the one focused on in the book description is actually the main character. I would instead have chosen Keira as the main character, as she is the one that has the most difficulty adjusting and the one really ties the others together. Callie does have a big story line as well, while Malcolm is portrayed as the father figure to both girls.

I really enjoyed watching this new family become more than just a family by name but also a family who loved and cared for one another.

There is a giveaway along with this book review tour and I’d love for you to enter!