Since I last updated I have finished four more books. 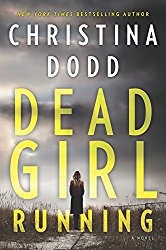 I received a copy of Dead Girl Running by Christina Dodd from Harlequin Books in exchange for an Instagram photo. I usually try to align my photos with my reviews, but this one did not line up because I had other books I had to finish before this one. I found this book a bit choppy, but I liked the characters and the mystery of the story.

“Girl running… from a year she can’t remember, from a husband she prays is dead, from homelessness and fear. Tough, capable Kellen Adams takes a job as assistant manager of a remote vacation resort on the North Pacific Coast. There amid the towering storms and the lashing waves, she hopes to find sanctuary. But when she discovers a woman’s dead and mutilated body, she’s soon trying to keep her own secrets while investigating first one murder… then another. Now every guest and employee is a suspect. Every friendly face a mask. Every kind word a lie. Kellen’s driven to defend her job, her friends and the place she’s come to call home. Yet she wonders–with the scar of a gunshot on her forehead and amnesia that leaves her unsure of her own past–could the killer be staring her in the face?”

I liked the setting of the book which is located on the coast of Washington during the off season of a resort. The storms that constantly roared through set the scenes for a mystery perfectly. The mystery of Kellen’s past was more interesting to me than the mystery of the dead woman in the present, but both were told concurrently. The way some of the details were told annoyed me and I think they could have been written better. However, overall this was not a bad read. 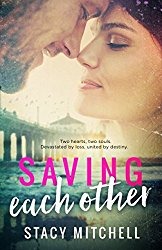 Next up was Saving Each Other by Stacy Mitchell. I received this book from PR By The Book in exchange for my review. I believe this book was self-published and I found a lot of it written immaturely, as if the author was not well-polished or edited. The plot had a lot of promise, but the writing itself didn’t impress me – specifically the two characters both written in first person but not really having different voices and the tendency for the character to think something and then repeat it out loud, which is not necessary!

“What would you do if the most important people in your world were suddenly and violently taken away from you? Two cars demolished, two families destroyed. Dani Adams and Ean Montgomery were each forced to see the same grief counselor on a one-to-one basis after a drunk driver killed Dani’s husband along with Ean’s pregnant wife and six-year-old son. The rules: Communicate only through text messages, and never reveal their real names or any other personal details. In an unconventional twist of therapy, Dani and Ean were each given a private cell phone and only the first initial of each other’s first names. They were then instructed to reach out to one another in order to share their grief…to heal. Neither planned to contact the other, but with all hope and the will to live gone… Over the course of a year, through texting alone, they form a unique bond. Friendship blossoms into something deeper. They were never supposed to meet, but fate had other plans. And in their world of loss and despair, something amazing began to grow. But can the love they found triumph over the deep, soul-twisting pain that never seems to fade?”

I liked the California beach location of this book. I enjoyed Dani’s relationship with her in-laws as well as the personality of her daughter. I liked that Dani and Ean weren’t going through quite the same thing as each other, as Ean lost his child and Dani did not, but were still able to relate to each other’s pain. The ending was so cliché. Sweet, but I did find myself rolling my eyes. This book is the first in a series. I wonder what the plots of the upcoming sequels will be! 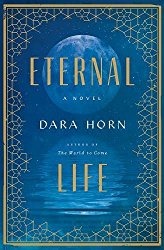 Next, I read Eternal Life by Dara Horn. I have read all of her books and I got this from the library. This book contains a good deal of fantasy along with some Jewish history and current events. Dara Horn writes with such intelligence that I sometimes don’t feel smart enough to read her books. It took me way too long to realize that I’ve heard of the historical figure that was one of the main characters in the book!

“Rachel is a woman with a problem: she can’t die. Her recent troubles―widowhood, a failing business, an unemployed middle-aged son―are only the latest in a litany spanning dozens of countries, scores of marriages, and hundreds of children. In the 2,000 years since she made a spiritual bargain to save the life of her first son back in Roman-occupied Jerusalem, she’s tried everything to free herself, and only one other person in the world understands: a man she once loved passionately, who has been stalking her through the centuries, convinced they belong together forever. But as the twenty-first century begins and her children and grandchildren―consumed with immortality in their own ways, from the frontiers of digital currency to genetic engineering―develop new technologies that could change her fate and theirs, Rachel knows she must find a way out.”

This was a quick read at only 256 pages. Essentially, it was about the meaning of life and death and the question of what one does when faced with repeating her life over and over starting from the age of 18. I think there could have been more to it to make it a better story, but I enjoyed the concept of the book. It wasn’t my favorite by this author, but I will continue to read her books in the future. 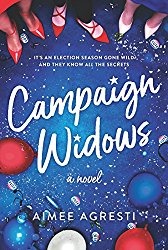 Finally, I read Campaign Widows by Aimee Agresti. A book that would be highly entertaining during an election year, this book never got into politics while still throwing the reader into the world of D,C. fundraisers, press and parties. I received this book from Harlequin publicity in exchange for an Instagram post.

“Cady Davenport is living the American dream…At least she’s supposed to be. She’s in a new city, with a new job and even a new fiancé. But when her husband-to-be hits the road for the upcoming presidential election, Cady realizes she’s on her own—and that her dream life might not be all she’d imagined. Until she finds herself thrust straight into the heart of the most influential inner circle in Washington, DC: the campaign widows. As friends, they’re an unlikely group—a fabulous Georgetown doyenne; a speechwriter turned mommy blogger; an artsy website editor; and a First Lady Hopeful who’s not convinced she wants the job. But they share one undeniable bond: their spouses are all out on the trail during a hotly contested election season. Cady is unsure of her place in their illustrious group, but with the pressures of the unprecedented election mounting, the widows’ worlds keep turning—faster than ever—as they hold down the fort while running companies, raising babies, racking up page views and even reinventing themselves. And their friendship might be just what Cady needs to find the strength to pursue her own happiness.”

Although I am not a fan of calling oneself a widow when your spouse is away, I did find the dialogue in this book witty and entertaining. The main characters were unique – aside from Cady, they range from the rich party planner Birdie who is wondering whether her marriage is meant to last, to the former speechwriter Reagan with an adorable set of twins, to the editor Jay who helps his boyfriend edit his articles from the trail, to Madison, the energetic and creative wife of one of the candidates. It is hard to keep the minor characters straight, but these main five and the bond they form are the ones that make the story.