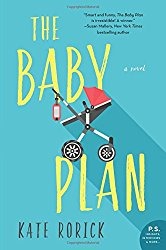 I received a copy of The Baby Plan by Kate Rorick from TLC Book Tours in exchange for my review.  This was one of the sweetest books I’ve read in awhile, even though I’m not exactly at the same point of life as any of the characters! Three very different woman find themselves expecting babies. Two of the women are sisters, although one is a good deal older than the other. The third woman seems to be unconnected at first, but we later realize there are many ways she is connected to the sisters.

“Meet the mothers…Nathalie Kneller: Nathalie’s plan: to announce her pregnancy now that she’s finally made it past twelve weeks! But just as she’s about to deliver (so to speak) the big news to her family, her scene-stealing sister barfs all over the Thanksgiving centerpiece. Yup, Lyndi’s pregnant too, swiping the spotlight once more… Lyndi Kneller: Lyndi’s plan: finally get her life together! She’s got a new apartment, new promotion, new boyfriend. What she didn’t count on—a new baby! She can barely afford her rent, much less a state-of-the-art stroller… Sophia Nunez: Sophia’s plan: Once she gets her daughter Maisey off to college, she’ll finally be able to enjoy life as make-up artist to one of Hollywood’s biggest stars, and girlfriend to one of rock’s hottest musicians. But after 18 years she discovers the stork is once again on its way… Now these women are about to jump headlong into the world of modern day pregnancy. It’s a world of over the top gender reveal parties (with tacky cakes and fireworks); where every morsel you eat is scrutinized and discussed; where baby names are crowd-sourced and sonograms are Facebook-shared. And where nothing goes as planned…”

I really enjoyed all three women, as well as Sophia’s daughter Maisey. The characters were well-written and entertaining. It was interesting to read about the reactions of the family members and friends and the way the two sisters were treated differently based on their ages. Gender reveals and baby showers are Pinterest events these days, and the way these events were described was very funny. Some of my favorite scenes took place at Lyndi’s job in the flower district in L.A. That sounds like a place I’d like to visit!

Each of the women in the story has a struggle that she must find her way through and I enjoyed following each of them on their journeys!