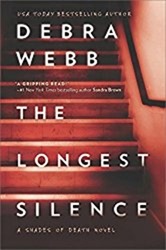 I received a copy of The Longest Silence by Debra Webb from TLC Book Tours in exchange for my review. Being a new fan of the show Criminal Minds, I was excited that this book also features a character who is part of the Behavioral Analysis Unit of the FBI. A mystery about a serial abductor, this book kept me guessing and even feeling like I could solve crimes myself.

“Joanna Guthrie was free. She had been for eighteen years–or so she needed everyone to believe. What really happened during the longest fourteen days of her life, when she and two other women were held captive by a dangerous serial killer, wasn’t something she could talk about. Not after what they had to do to survive. But when more women go missing in an eerily similar manner, Jo knows her prolonged silence will only seal their fates. She’s finally ready to talk; she just needs someone to listen. FBI special agent Tony LeDoux can’t deny he finds Jo compelling—he’s just not sure he believes her story. But with the clock ticking, Jo will do anything to convince him, even if it means unearthing long-buried secrets that will land them squarely in the crosshairs of the killer…”

I have not read the other books in the Shades of Death series, but that did not stop me from enjoying this 4th book in the series. In fact, it appears that the other books featured on Nick Shade, while this one only includes him briefly, towards the end of the book when he arrives to offer help. Instead, Tony LeDoux works with a former captive of a current unidentified subject, Joanna Guthrie, who proves to be worthy of being an FBI agent herself. The book details the search for two missing girls in the present, with some interspersed chapters describing what Joanna went through in the past, as well as what Tiffany is experiencing in the present. I will say that if you are sensitive to reading details about other people’s mistreatment, you will probably find some scenes in this book difficult. However, if you enjoy a good suspense novel, this one features likeable, well-developed characters and page-turning anticipation!