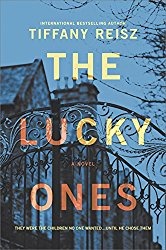 I received a copy of The Lucky Ones by Tiffany Reisz from TLC Book Tours in exchange for my review. The book started a bit slow for me, but once I was involved in the story of the main character’s past, I was invested to know the secret of what happened to her as a child.

“They called themselves ‘the lucky ones.’ They were seven children either orphaned or abandoned by their parents and chosen by legendary philanthropist and brain surgeon Dr. Vincent Capello to live in The Dragon, his almost magical beach house on the Oregon Coast. Allison was the youngest of the lucky ones living an idyllic life with her newfound family…until the night she almost died, and was then whisked away from the house and her adopted family forever. Now, thirteen years later, Allison receives a letter from Roland, Dr. Capello’s oldest son, warning her that their father is ill and in his final days. Allison determines she must go home again and confront the ghosts of her past. She’s determined to find out what really happened that fateful night — was it an accident or, as she’s always suspected, did one of her beloved family members try to kill her? But digging into the past can reveal horrific truths, and when Allison pieces together the story of her life, she’ll learns the terrible secret at the heart of the family she once loved but never really knew.”

The setting of this book was a little bit dark. The home that Dr. Capello owns has its own secrets and past, but those who lived there were not afraid of the house. What they might not have realized though was what they should have actually be scared of! With the help of her former adopted siblings, Allison resolves to solve the mystery of why she was removed from the home she loved. Along the way, she encounters lies, betrayal, and love. This was a unique novel and I enjoyed reading about Allison’s growth as she finally uncovered the mystery of her past.