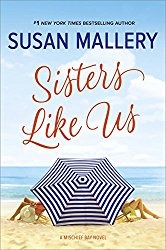 I received a copy of Sisters Like Us by Susan Mallery from TLC Book Tours in exchange for my review. This is officially the first book I finished in 2018! Sisters Like Us is a Mischief Bay novel. I had previously read another Mischief Bay novel but I don’t think any of the characters overlapped. I think the common thread of the books is the location. This book is about sisters, and also mothers and daughters. The book is told from the view points of sisters Harper and Stacey, as well as of Harper’s daughter, Becca.

“Divorce left Harper Szymanski with a name no one can spell, a house she can’t afford and a teenage daughter who’s pulling away. With her fledgling virtual-assistant business, she’s scrambling to maintain her overbearing mother’s ridiculous Susie Homemaker standards and still pay the bills, thanks to clients like Lucas, the annoying playboy cop who claims he hangs around for Harper’s fresh-baked cookies. Spending half her life in school hasn’t prepared Dr. Stacey Bloom for her most daunting challenge—motherhood. She didn’t inherit the nurturing gene like Harper and is in deep denial that a baby is coming. Worse, her mother will be horrified to learn that Stacey’s husband plans to be a stay-at-home dad…assuming Stacey can first find the courage to tell Mom she’s already six months pregnant.
Separately they may be a mess, but together Harper and Stacey can survive anything—their indomitable mother, overwhelming maternity stores and ex’s weddings.”

Harper and Stacey struggle with living up to their mother’s standards for them. Harper has her own business, which is successful and keeps her very busy. Still, she knows her mother expects her to decorate for each season and holiday and she does so to avoid an argument. Stacey is a doctor, having always been into science over creativity. She is pregnant but she is overly concerned that she won’t be a good mom – she didn’t have a very good role model after all. She is also nervous to even tell her mother she is pregnant. Sure enough, when the news comes out, Bunny is upset at everyone for keeping her in the dark.

Becca is a typical teenager struggling with losing her friend who has recently moved. When Stacey’s husband’s nephew moves in with them, Becca becomes close with him and they have a sweet relationship. Also, a great-aunt leaves Becca three Doberman pinchers! Stacey adopts one and Harper’s friend Lucas adopts one, while Becca keeps one herself. I just love the descriptions of the dogs and how loyal they were to their humans. I also loved that Becca was able to find a new hobby when she signed her dog up for agility lessons. Becca doesn’t have a close relationship with her father, but she finds a father figure in Lucas, who becomes important to the rest of the family as well.

Overall, I really enjoyed the various relationships in this book, as well as the relatable characters and story lines.