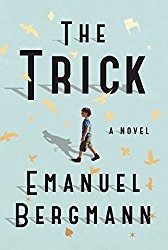 I received a copy of The Trick by Emanuel Bergmann from TLC Book Tours in exchange for my review. It’s been a little while since I reviewed a book from TLC Book Tours but their choices have been amazing this past year and this one was too. The Trick reminded me of a cross between The Orphan’s Tale (review here) and The History of Love – one of my all time favorites! An old man and a young boy find a connection and the deeper story revealed surprises everyone.

“In 1934, a rabbi’s son in Prague joins a traveling circus, becomes a magician, and rises to fame under the stage name the Great Zabbatini just as Europe descends into World War II. When Zabbatini is discovered to be a Jew, his battered trunk full of magic tricks becomes his only hope of surviving the concentration camp where he is sent. Seven decades later in Los Angeles, ten-year-old Max finds a scratched-up LP that captured Zabbatini performing his greatest tricks. But the track in which Zabbatini performs his love spell—the spell Max believes will keep his disintegrating family together—is damaged beyond repair. Desperate for a solution, Max seeks out the now elderly, cynical magician and begs him to perform his magic on his parents. As the two develop an unlikely friendship, Moshe discovers that Max and his family have a surprising connection to the dark, dark days the Great Zabbatini experienced during the war.”

The book alternates between the viewpoints of Moshe, a teen in Europe in the 1930’s, and Max, a boy in L.A. in 2007. Conveniently, Moshe now lives in L.A. too. Moshe as an old man is an amusing character, and considering everything he went through in his past, it is understandable that he is not hopeful about life. Meeting Max changes things, as he bonds with the members of Max’s family.

The one part of the book that bothered me was Max’s father’s dismissal of his mother’s stories about the Holocaust. It seems he never wanted to listen to her when she tried to talk about what happened to her. This became important to the end of the book, where what really happened is revealed – and it’s beautiful!

If you would like to win a copy of this book, just leave me a comment telling me to enter you!