What happens when you put something like 10 books on your library request list and they all come in at once? You have to read them all! 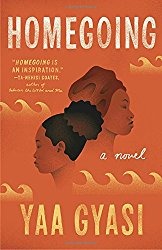 I started with Homegoing by Yaa Gyasi, my book group’s choice for our next meeting. I wasn’t sure how long it would take me to read because I assumed the historical parts of the book would not interest me. I was wrong! The entire book is a fictional rendering of African history by tracing two sisters and their descendants living in both Ghana and in America, and the entire book held my interest and kept me captivated.

“Ghana, eighteenth century: two half sisters are born into different villages, each unaware of the other. One will marry an Englishman and lead a life of comfort in the palatial rooms of the Cape Coast Castle. The other will be captured in a raid on her village, imprisoned in the very same castle, and sold into slavery.
Homegoing follows the parallel paths of these sisters and their descendants through eight generations: from the Gold Coast to the plantations of Mississippi, from the American Civil War to Jazz Age Harlem. Yaa Gyasi’s extraordinary novel illuminates slavery’s troubled legacy both for those who were taken and those who stayed—and shows how the memory of captivity has been inscribed on the soul of our nation.”

Each section of this book focuses on one of the descendants of either Effia, whose descendants remained in Ghana, or Esi, who was sold into slavery and whose descendants reside in various locations in America. By providing each generation with a story, the book captures the history of each time period and explains the overall effects of slavery, both immediate and long-lasting. With so many characters, it was sometimes hard to remember who was who, but the effect is moving and beautiful. There was much to learn from each chapter in the book.  I truly loved the ending, which ties together the two branches of the split family so many generations later. 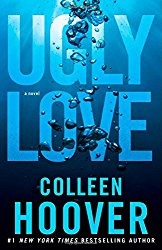 Next, I read Ugly Love by Colleen Hoover. This being my 3rd of Hoover’s books, I feel like I’ve figured out her format. She writes about women who are strong and independent, their only flaw being that they fall for very complicated men.

“When Tate Collins meets airline pilot Miles Archer, she doesn’t think it’s love at first sight. They wouldn’t even go so far as to consider themselves friends. The only thing Tate and Miles have in common is an undeniable mutual attraction. Once their desires are out in the open, they realize they have the perfect set-up. He doesn’t want love, she doesn’t have time for love, so that just leaves the sex. Their arrangement could be surprisingly seamless, as long as Tate can stick to the only two rules Miles has for her. Never ask about the past. Don’t expect a future. They think they can handle it, but realize almost immediately they can’t handle it at all. Hearts get infiltrated. Promises get broken. Rules get shattered. Love gets ugly.”

It was not hard to uncover what had happened to Miles in his past, though I had it only partially right at first. Like Hoover’s other male characters, he did something that hurt others and changed his life, effected who he is now. Tate thinks she is fine with a no-strings-attached relationship, and she is fine, until she’s not. Then Miles is forced to confront his past and how it is hurting his future. The book was well-written and entertaining, but I wonder if I should bother reading the other Hoover book I also got from the library now that I know the basic premise of all of her books! 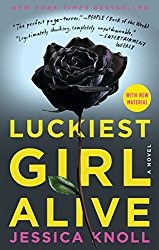 I remember hearing a lot about Luckiest Girl Alive by Jessica Knoll and I was excited that it was available at the library. While I expected the book to be more of a thriller, it was more of a saga about a difficult high school situation and how the things that happened in her youth made Ani the person she became as an adult.

“As a teenager at the prestigious Bradley School, Ani FaNelli endured a shocking, public humiliation that left her desperate to reinvent herself. Now, with a glamorous job, expensive wardrobe, and handsome blue blood fiancé, she’s this close to living the perfect life she’s worked so hard to achieve. But Ani has a secret. There’s something else buried in her past that still haunts her, something private and painful that threatens to bubble to the surface and destroy everything. With a singular voice and twists you won’t see coming, Luckiest Girl Alive explores the unbearable pressure that so many women feel to ‘have it all’ and introduces a heroine whose sharp edges and cutthroat ambition have been protecting a scandalous truth, and a heart that’s bigger than it first appears. The question remains: will breaking her silence destroy all that she has worked for—or, will it at long last, set Ani free?”

The story goes back and forth between the present day and the past, slowly revealing the painful and sometimes horrifying things that occurred back in high school. The reveal starts out slow, but there is a large chunk in the middle where the rest of everything is revealed at once. To be honest, I was not sure which of the things that occurred was the public humiliation and which was the private and painful thing that threatened to destroy everything. Both of the main things that happened were pretty devastating. The person that Ani is now is very unlikeable. When she does finally face what happened to her, the reader can only hope that she will be able to heal and move on. 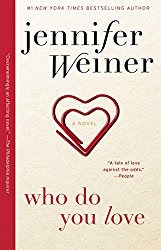 When I heard that Jennifer Weiner had a book out that I had not read, I was very excited because I love her writing. Who Do You Love was a quick read, filled with moving moments surrounding both of the main characters, Rachel and Andy.

“Rachel Blum and Andy Landis are just eight-years-old when they meet one night in an ER waiting room. Born with a congenial heart defect, Rachel is a veteran of hospitals, and she’s intrigued by the boy who shows up alone with a broken arm. He tells her his name. She tells him a story. After Andy’s taken back to a doctor and Rachel’s sent back to her bed, they think they’ll never see each other again. Yet, over the next three decades, Andy and Rachel will meet again and again—linked by chance, history, and the memory of the first time they met, a night that changed both of their lives.”

I expected the meetings between Rachel and Andy to be a little more random than they were – the only random meetings were the first two. After that, each time they reunited it was on purpose, brought about by one of them. I enjoyed the shared history between the pair. However, because Rachel and Andy are just so different from one another, it was hard to believe that they could be happy together in the end. While I really enjoyed their individual stories, I hoped for more proving that they could be strong together.