It’s been about a month since I last updated on what I’ve been reading, and since then I’ve finished a few more books! 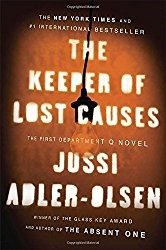 For our book group this month, we read The Keeper of Lost Causes by Jussi Adler-Olsen. We all agreed that we enjoyed the book, the first mystery we have read in our group.

“Carl Mørck used to be one of Denmark’s best homicide detectives. Then a hail of bullets destroyed the lives of two fellow cops, and Carl—who didn’t draw his weapon—blames himself. So a promotion is the last thing he expects. But Department Q is a department of one, and Carl’s got only a stack of cold cases for company. His colleagues snicker, but Carl may have the last laugh, because one file keeps nagging at him: a liberal politician vanished five years earlier and is presumed dead. But she isn’t dead…yet.”

The story switches back and forth in time from the present, as Carl tries to solve the case, to the past, where we learn what has happened to Merete. Carl’s faithful assistant Assad proves to be much more helpful than anyone expected, and the two make a great team. The mystery of where Merete vanished to and why becomes clear as the two investigate the leads that their colleagues failed to follow up on five years earlier. Being that this book is part of a series, I imagine further books will continue to develop Carl’s character and feature him solving more cold cases. 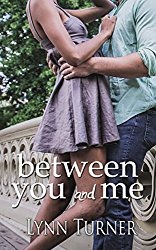 Next, I read Between You and Me by Lynn Turner. I received this book from the author in exchange for my review. Sometimes whirlwind love stories are hard to believe, but this one was not only believable but also made me fall in love with the characters themselves.

“Love at first sight strikes Seattle Scientist Finnegan Kane at the worst possible moment, paralyzing him as he’s pitching his cutting-edge idea to powerful New York venture capitalist Emanuela Monroe…Finn survived the crash that killed his parents when he was sixteen. Twenty years later, his smart devices are about to redefine what it means to be disabled. Emanuela makes dreams come true for a living, but still longs to fulfill her own. Despite Finn’s stunning secret, she thinks his idea might be worth the risk…and he’s determined to show her that he is, too.”

Finn is the perfect man – smart, handsome, kind, and he loves Emanuela! The only real difficulty in their relationship is the distance between them. The story unfolds around the times the two are able to be together, and I think the fact that they can’t see each other all the time is the reason their relationship moves quickly once they each realize how perfect they are for each other. If you’re a fan of romance, I’m sure you’ll love this one! 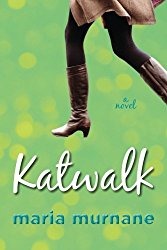 Finally, I read Katwalk by Maria Murnane. I also received this book from the author in exchange for my review. This is the 4th book by Maria Murnane that I have read and reviewed, and I have loved all of them! Katrina decides to quit her job and move to New York – by herself!

“Katrina Lynden has always walked a straight line in life, an approach that has resulted in a stable career and pleased her hard-nosed parents but that has also left her feeling unfulfilled—and miserable. When her best friend suggests they quit their Silicon Valley jobs and embark on two months of adventure in New York City, Katrina balks at the idea but ultimately agrees, terrified yet proud of herself for finally doing something interesting with her life. But when her friend has to back out at the last minute, Katrina finds herself with a tough decision to make. Much to her surprise, she summons the courage to go alone, and the resulting journey changes everything. Along the way she makes new friends, loses others, learns what is really important to her, and finds a way to grow up without leaving herself behind.”

I can’t imagine having the kind of courage Katrina had, to move across the country herself and to make a life for herself there. Luckily, she found friends right away and got lucky with the apartment she sublet! I imagine things could have turned out badly in that sense! When Katrina’s new friends nickname her “Kat,” she embraces her new self and finds out that she can be herself in a totally new way.

I just put a bunch of books on hold at the library so I’ll have more books to read soon!