Is there anything worse then seeing someone you love hurt? Maybe actually seeing them get hurt and knowing there’s nothing you can do to stop it. On Friday, Simon rode his scooter down a hill near our house while Dave called to him “Simon, stop, too fast,” and Zachary pointed out that he was going to fall. And sure enough, he did. 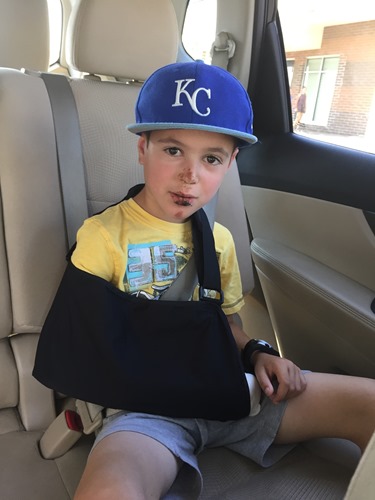 Flat on his face.

He stood back up right away and my first thought was that he might have broken his arm, but after that I had to refocus on the blood pouring off of him. There was a lot of blood. Somehow I didn’t freak out, but Dave was the one who unbuttoned Simon’s shirt and had him use it to sop up his blood as we walked back home. In case you’re wondering, yes, you can still see the blood on the sidewalk where it happened.

Once we made it home, Dave got to work cleaning up Simon’s face while Gabbie and I went to ask our nurse friend who lives nearby to come over and check him out. See, it was Rosh Hashanah, and past 5 pm on a Friday, so we didn’t necessarily want to rush him to the ER if it wasn’t necessary.

When we got back, Simon was all cleaned up, enough so that we could see his lips were very swollen and cut open, but not deeply, and we discovered that he had chipped a tooth. Our friend (and her granddaughter, who is in Simon’s class and was so cute and caring!) looked him over and said he wasn’t going to need stitches, but we did place a call to the dentist to see if we needed to do anything immediately about his tooth. The dentist felt that it wasn’t an emergency and said I should call on Monday for an appointment. We held ice on his lip to help with the swelling.

At that point we also noticed that Simon’s right index finger was bruised and swollen, but he was able to wiggle it, so we thought it was just bruised and not broken. He was a bit shaky and sleepy so we gave him some apple juice and a jacket and our friend and her granddaughter brought over some ice pops (and a feel better crown and a sticker!). Then he had some dinner and Motrin and went to bed.

In the morning, his face still looked pretty bad as his lip scabbed over and he looked like his face was dirty with chocolate. We went to synagogue and a few of our friends that are doctors offered their opinions, which were mostly that his face was fine but his finger still looked like it could be broken. 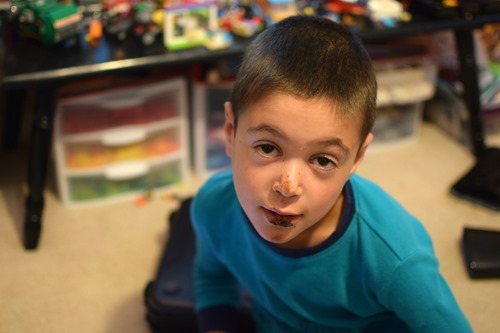 (The pictures are both from Sunday, after his lips were done swelling).

On Sunday we took him to the urgent care to get looked at. They agreed that the facial scrapes were superficial but he had an x-ray for his finger. When it came back that it was broken, I expected they would give him a small finger splint, but instead they wrapped up his whole right arm, up to his elbow! This was because the break looks like it is nearing the growth plate. He also got a sling to help him hold up his arm. We have a follow up appointment on Thursday and I hope he will get a smaller splint at that point, because with his right hand in a sling, he can’t write or even eat easily! 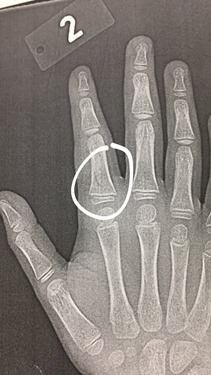 Yesterday (Monday) we saw the dentist and they took x-rays to make sure the chipped part of his tooth didn’t end up inside his lip – ick! Luckily it was not seen. He does have a tear to his frenulum – the part of his lip that attaches to his gum – so they aren’t going to fix his tooth until that heals.

For now, he is doing ok, and I’m telling myself that it wasn’t my fault, it is good that he’s in such an inconvenient splint so that it heals ok, and his face will look better soon!