Other than the books I have already shared recently, I finished 4 books this summer. 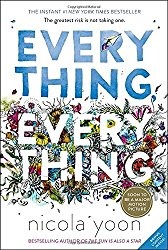 Before we left for NJ, I ordered Everything Everything by Nicola Yoon so that Gabbie and I could both read it. Gabbie also got to see the movie with her grandma while we were there. As for the book, I thought it was creatively written and entertaining.

“What if you couldn’t touch anything in the outside world? Never breathe in the fresh air, feel the sun warm your face . . . or kiss the boy next door? In Everything, Everything, Maddy is a girl who’s literally allergic to the outside world, and Olly is the boy who moves in next door . . . and becomes the greatest risk she’s ever taken.”

I liked Olly, and I can understand why he was intrigued by the idea of Maddy, the girl he only saw through her window. The fact that both teenagers were able to do basically anything with no one to stop them was a little unbelievable.

I can’t say much without spoiling the twist towards the ending of the book, but I liked that not everything was as it seemed! 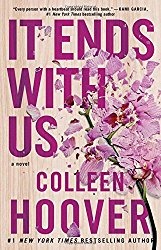 “Lily hasn’t always had it easy, but that’s never stopped her from working hard for the life she wants. She’s come a long way from the small town in Maine where she grew up—she graduated from college, moved to Boston, and started her own business. So when she feels a spark with a gorgeous neurosurgeon named Ryle Kincaid, everything in Lily’s life suddenly seems almost too good to be true. Ryle is assertive, stubborn, maybe even a little arrogant. He’s also sensitive, brilliant, and has a total soft spot for Lily. And the way he looks in scrubs certainly doesn’t hurt. Lily can’t get him out of her head. But Ryle’s complete aversion to relationships is disturbing. Even as Lily finds herself becoming the exception to his ‘no dating’ rule, she can’t help but wonder what made him that way in the first place. As questions about her new relationship overwhelm her, so do thoughts of Atlas Corrigan—her first love and a link to the past she left behind. He was her kindred spirit, her protector. When Atlas suddenly reappears, everything Lily has built with Ryle is threatened.”

It’s hard to discuss this book without giving away the secret that hides underneath Lily and Ryle’s seemingly perfect relationship. I will instead tell you that I loved Lily’s flower store, her relationship with her best friend, and the fact that as a teenager, Lily wrote a journal in the form of letters addressed to Ellen Degeneres. I loved that Atlas was there for Lily and that she used that connection to help herself when she needed to. And I loved that the couple did the right thing, even if the reader might have wished that things turned out differently. 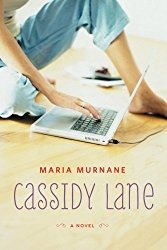 “Bestselling author Cassidy Lane walks into her twentieth high school reunion with several novels under her belt, but no date on her arm, and deep down she still feels like the smart girl no one asked to the prom. Then handsome Brandon Forrester confesses his teenage crush, and soon Cassidy finds herself swept up in a modern-day fairytale romance not unlike the tales she spins for a living. While their relationship blossoms, however, the new book she’s writing isn’t going as well, and for the first time in her career she considers crafting an ending that doesn’t include a proverbial walk into the sunset. Contemplating the simultaneous reversal of her own romantic fortune and that of her protagonist’s is daunting, but maybe it’s time for both her writing and her personal life to take a new path. Or is it?“

The lesson in this book is that love isn’t always the be all and end all of life. Cassidy has great friends and a job she loves, but she hasn’t yet married. I appreciated this look at what makes a life a good life and I look forward to reading the other novel that Maria Murnane sent me to review!

Also – I love what Murnane wrote to me inside the book cover – aren’t you glad you’re no longer in high school? Yes, for sure! 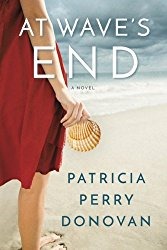 Lastly, I was sent At Wave’s End by Patricia Perry Donovan by the author in exchange for my review. Like Hurricane Sandy, the fictional Hurricane Nadine hits the Jersey Shore and leaves havoc up and down the East Coast. Those effected learn to help each other and become a kind of a family.

“After a childhood as unpredictable as the flip of a coin, Faith Sterling has finally found her comfort zone in the kitchen of an upscale Manhattan restaurant. A workaholic chef, at least there she’s in control. So when her free-spirited and often-gullible mother, Connie, calls to announce that she’s won a bed-and-breakfast on the Jersey Shore, Faith’s patience boils over. Convinced the contest is a scam, she rushes to Wave’s End to stop Connie from trading her steady job for an uncertain future. When a hurricane ravages the coast, Faith is torn between supporting the shore rescue and bailing out her beleaguered boss. But the storm dredges up deceptions and emotional debris that threaten to destroy the inn’s future and her fragile bonds with her mother. As the women struggle to salvage both the inn and their relationship, Faith begins to see herself and Connie in a new light—and to realize that some moments are better left to chance.”

Can you imagine winning a bed-and-breakfast? I’ve thought about how fun it would be to own one, but to win one means winning a lot of responsibility! The inn becomes a refuge for storm survivors and both Connie and Faith find themselves attached – both to the inn and to the people staying there. The subsequent recovery from the storm and fight to keep the inn running allows a lot of bonding, arguments, forgiveness, and strengthening of relationships. While the main story focuses on Faith and her mother, the other characters were important and likeable as well.