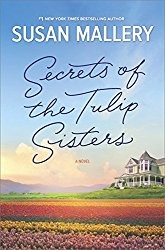 I received a copy of Secrets of the Tulip Sisters by Susan Mallery from TLC Book Tours in exchange for my review. I knew that I had previously read a book by Susan Mallery but I could not remember which book or when I read it. It turns out that it was The Girls of Mischief Bay and I read it back in March of 2015! I did remember that I liked the book, so I was happy to read another book by the same author. I think I may have liked this book even more than the one I read previously!

“Kelly Murphy’s life as a tulip farmer is pretty routine—up at dawn, off to work, lather, rinse, repeat. But everything changes one sun-washed summer with two dramatic homecomings: Griffith Burnett—Tulpen Crossing’s prodigal son, who’s set his sights on Kelly—and Olivia, her beautiful, wayward and, as far as Kelly is concerned, unwelcome sister. Tempted by Griffith, annoyed by Olivia, Kelly is overwhelmed by the secrets that were so easy to keep when she was alone. Olivia’s return isn’t as triumphant as she pretends. Her job has no future, and ever since her dad sent her away from the bad boy she loved, she has felt cut off from her past. She’s determined to reclaim her man and her place in the family…whether her sister likes it or not. For ten years, she and Kelly have been strangers. Olivia will get by without her approval now. While Kelly and Olivia butt heads, their secrets tumble out in a big hot mess, revealing some truths that will change everything they thought they knew. Can they forgive each other—and themselves—and redefine what it means to be sisters?”

Olivia moved away when she was 15 and hasn’t spoken to Kelly since. So both sisters begin their new relationship with certain pre-conceived ideas and memories about each other. It doesn’t take long for them to reconnect and start anew with one another, which is admirable of them. Of course, not everything is smooth and it takes time for the family to move on from the past.

Another thing that I enjoyed in the book was that most of the characters had interesting careers. Griffith’s job as a tiny house builder might have been my favorite. Olivia showed off her many skills in running a town fundraiser and Kelly’s tulip farm made me want to visit Washington State when the tulips are blooming!

This is definitely a great book to pick up this summer if you get the chance! What have you been reading lately?