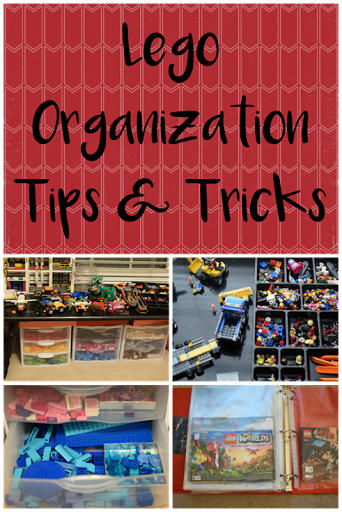 One of my friends recently asked me what my kids play with now that they’re older. Since I’ve been getting rid of so many things, you may be wondering what we kept! One of the main things we kept is Legos. We’ve always had a lot of Legos, but they were a big jumbled mess, and ever since I organized them, I’m happy to say that the kids are playing with them even more. They used to build a set once and then if it fell apart, we would just leave it alone. A few of the sets have stayed together. But most of the Legos were just in piles everywhere. Our Lego table looked a bit like this: 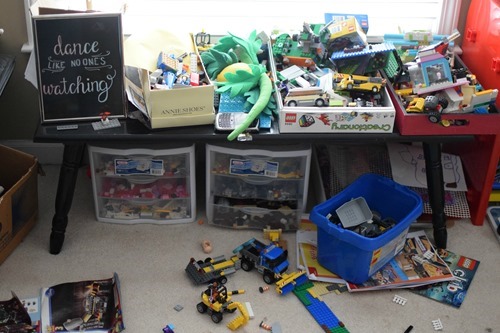 The drawers underneath were supposed to be sorted by color, but instead they looked a bit like this: 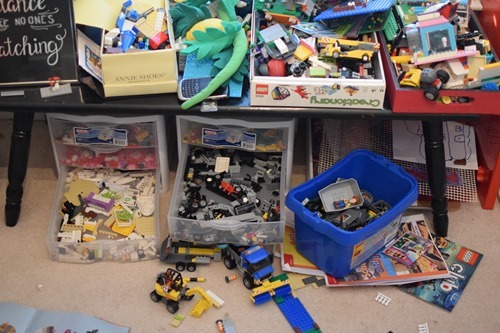 Bit by bit, I went through each box and section until I ended up with this: 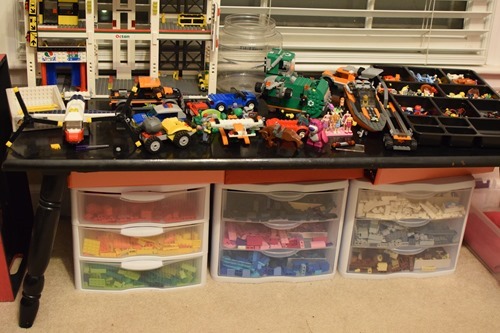 Nothing but Legos, all sorted, and playable!

Here’s how I did it.

Decide how you want to sort your Legos.
In the first photos, you can see that I had one less set of small drawers. The Legos were semi-sorted by color, but I had small pieces and mini-figures in one drawer, pink and red in the next, white, beige, yellow, green, and purple all mixed into one drawer, black and grey in one, etc. When I started over, I soon realized I needed another set of drawers and that I had a lot of certain colors of Legos. Our drawers are now red, yellow and orange, green, black, pink and purple, blue, white, grey, and brown and beige. You may not have pink and purple Legos, but Gabbie went through a huge Lego Friends phase, so we have a bunch of those colors! 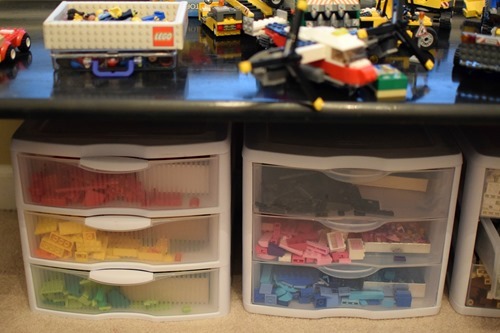 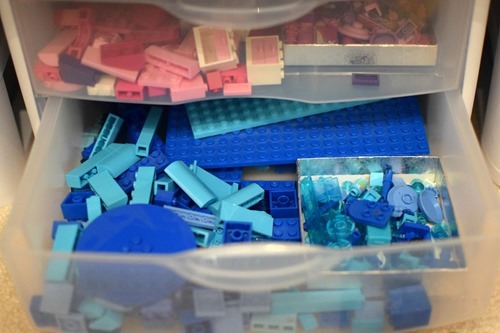 Inside of the blue drawer. I also included smaller boxes inside each drawer so that small pieces don’t get lost!

Gather Your Legos.
Much of our pieces were on top of the table and surrounding it, but there were also pieces in Zachary’s room and in the basement. I did this a little at a time because it can get overwhelming! If the sets were mostly still put together, I left them as is or tried to complete them. I took apart sets that were not almost completed. 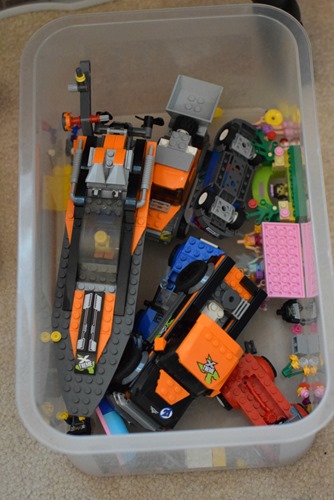 Make use of what you already have.
Right next to the Lego table, we also have an actual Lego table with bins that were filled with all things non-Lego, and topped with partial Lego structures and other toys. It became pretty obvious while I was sorting that we had a lot of white, grey, and beige Legos, so I used these extra bins for the larger pieces of those colors. I also used a bin for all things wheels – we have a ton of Lego cars! And another for some of the Lego Junior pieces that are meant to go with certain sets. 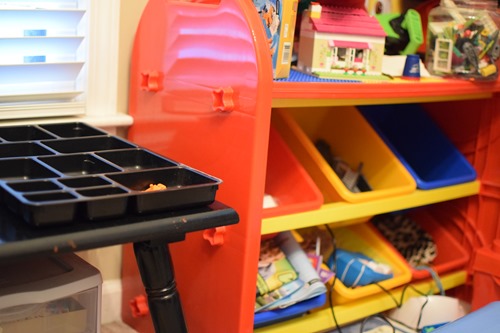 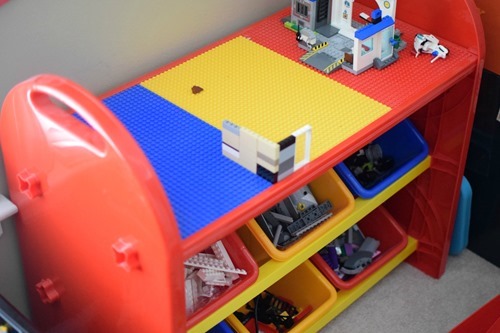 Once the top of this table was cleared, Simon immediately started to build on it!

Sort as best as you can.
We have volunteered a few times with a local organization called The Giving Brick. They actually sort their Legos by types of pieces in order to come up with complete sets to gift to kids in need. Although it would be amazing to do this in our house, there are a ton of types of pieces and only so much space and time! We did organize our mini-figures using this box that was previously apart of a game called Lego Creationary. I had found the game at Goodwill and we mostly used it for the pieces, but we did keep the game itself, which is really just a die and cards. Simon actually did the mini-figure sorting with only minimal help from me! 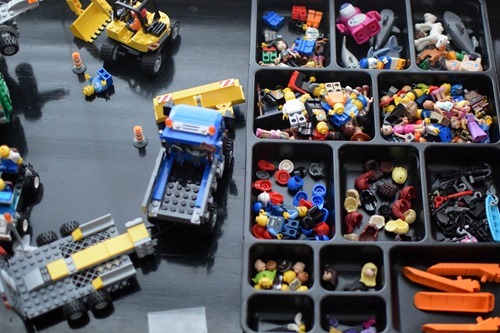 And now I routinely find things like this around the house: 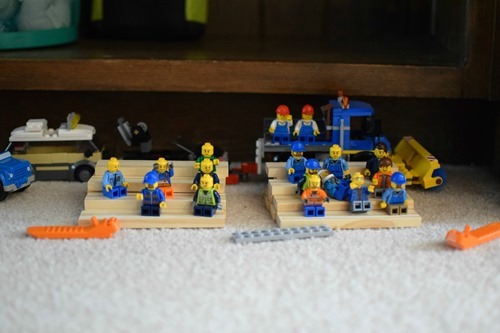 Sort your instruction manuals.
As it turns out, a volunteer for The Giving Brick organized their instruction manuals in file boxes, with dividers and folders, and it looks great! But we don’t really have the space for that, so it’s okay that I did ours this way. We already had one binder and I got two others on sale at Target. Our biggest binder now contains the Lego City manuals, which we have the most of, plus some Lego Movie manuals. The others contain Lego Friends manuals and Lego Creator manuals respectively. I put each set together inside page protectors, though I have seen people who have actually put each page of each manual into a page protector! My kids have to take out the manuals if they want to use one. I think they’re old enough to do so! I sorted the manuals in order by number, which helped while I was organizing, because sometimes I didn’t know which of the books went together when the set had more than one book. This way I just matched the numbers. 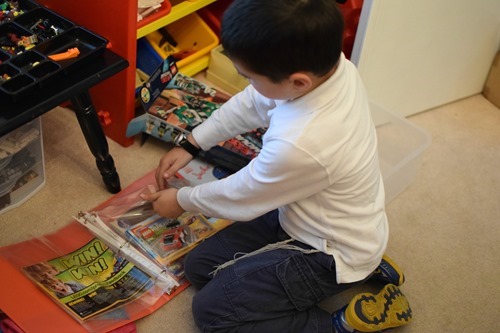 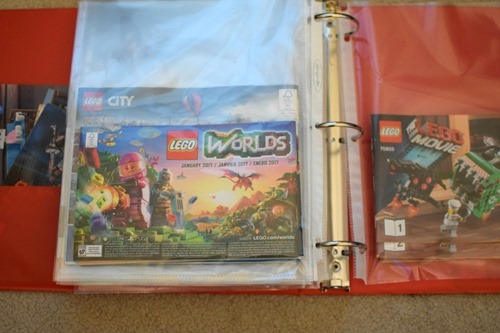 The binders fit on top of the drawers under the table! 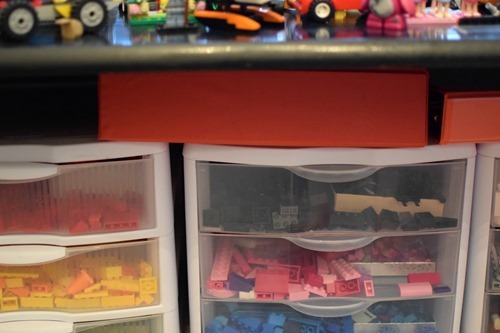 Is it working?
It’s certainly not as easy as buying a new set and having the pieces you need to put it together, but I tested this system while completing a few of the almost complete sets and I was able to find what I needed in the drawers. It is important that everything is separated though, because it is the hardest to find a piece when it is still stuck inside another piece from when the set was previously built! No one has decided to pull out a manual and rebuild a whole set yet, but I’m pleased to say that if they wanted to do so, it would be possible!

The best part of all of this is that the Legos are being played with again. They aren’t just sitting around in piles looking like garbage. The boys use the Lego cars and the mini-figures all the time now! Even though I know it would be even better if I could sort the pieces by type, for now, this system is working for us!

Do you have Legos all over your house? 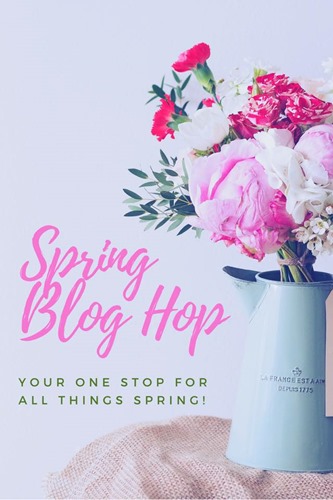 Looking for more Spring inspiration? I’ve joined a handful of my favorite bloggers to put together a Spring Blog Hop. Just click on each link below to discover new ideas for spring!