Since I last updated the books I’ve been reading aside from the ones that I have agreed to review for TLC Book Tours, I have finished reading 4 books.

My book group’s pick for the month of January was The Secret Life of Violet Grant by Beatriz Williams. There were mixed reactions from the group at our discussion last week. I always find it interesting to hear what others think of the books I have read! For me, this book was slow to get into, enjoyable, but not necessarily a favorite.

“Fresh from college, irrepressible Vivian Schuyler defies her wealthy Fifth Avenue family to work at cutthroat Metropolitan magazine. But this is 1964, and the editor dismisses her…until a parcel lands on Vivian’s Greenwich Village doorstep that starts a journey into the life of an aunt she never knew, who might give her just the story she’s been waiting for. In 1912, Violet Schuyler Grant moved to Europe to study physics, and made a disastrous marriage to a philandering fellow scientist. As the continent edges closer to the brink of war, a charismatic British army captain enters her life, drawing her into an audacious gamble that could lead to happiness…or disaster. Fifty years later, Violet’s ultimate fate remains shrouded in mystery. But the more obsessively Vivian investigates her disappearing aunt, the more she realizes all they have in common—and that Violet’s secret life is about to collide with hers.”

One thing I enjoyed about this book was the similarities in Violet’s and Vivian’s stories. I wished there was more of a reveal that connected the two, but instead the reader needs to draw her own conclusions to realize the similarities. I also enjoyed the slight twist at the end which brought a smile to my face. The historical part of the story could have been much more fleshed out, but the writer made a good attempt at making Violet into a Forest Gump type character – hanging out with Albert Einstein for example. My book group had rather varying view points on the Vivian character – we either loved her or despised her. I liked her, and I disagreed that her love story was hard to believe – I accepted it as the author wrote it. There are a lot of subplots to this story, making it a good book group discussion book.

A previously read book group choice was Big Little Lies by Liane Moriarty, and one of my fellow group members told me that she’d really liked Truly Madly Guilty, so I put myself on the library waiting list for it. Liane Moriarty has a talent in which she takes a moment in time and focuses an entire book around that moment – without telling the reader what actually occurred! I find this frustrating in her books at times. Luckily, in this one, the central event was revealed before the very end of the book!

“Sam and Clementine have a wonderful, albeit, busy life: they have two little girls, Sam has just started a new dream job, and Clementine, a cellist, is busy preparing for the audition of a lifetime. If there’s anything they can count on, it’s each other. Clementine and Erika are each other’s oldest friends. A single look between them can convey an entire conversation. But theirs is a complicated relationship, so when Erika mentions a last minute invitation to a barbecue with her neighbors, Tiffany and Vid, Clementine and Sam don’t hesitate. Having Tiffany and Vid’s larger than life personalities there will be a welcome respite. Two months later, it won’t stop raining, and Clementine and Sam can’t stop asking themselves the question: What if we hadn’t gone?”

This book is told in alternating view points and the time periods jump around often, so that I found myself going back to earlier portions of the book to try to understand the order of events and to remember previously revealed details. I think the concept of a single event causing so many reactions in those effected by it is an exciting one to explore. The way the writer brings everything together is entertaining, and while frustrating, it seems to be her unique style. I will continue to read her books in the future because overall, I do enjoy them.

I have a slight memory of reading Number The Stars by Lois Lowry in elementary school, but as it turns out I didn’t remember any of the story. When Gabbie was in 4th grade, her teacher read the book with the class, but I did not pay much attention. Now that Zachary is in 4th grade and has the same teacher that Gabbie did, I realized it would be a good idea for me to read the book too. Each day, the teacher read a chapter or two to the class and Zachary’s assignment was to reread those chapters for homework. Instead, I read the chapters out loud to both him and Gabbie, who also wanted to listen. It turned into a very nice experience to share the book with the two of them.

“As the German troops begin their campaign to ‘relocate’ all the Jews of Denmark, Annemarie Johansen’s family takes in Annemarie’s best friend, Ellen Rosen, and conceals her as part of the family. Through the eyes of ten-year-old Annemarie, we watch as the Danish Resistance smuggles almost the entire Jewish population of Denmark, nearly seven thousand people, across the sea to Sweden. The heroism of an entire nation reminds us that there was pride and human decency in the world even during a time of terror and war.”

It always amazes me how many stories can be brought out from the time of the Holocaust (see also: the next book I am reviewing today!) and this one is special because it is written for a young audience. At the same time, there was much in this book that I learned that I either did not know about or did not remember, if I did in fact read this book as a child. The resistance movement in Denmark was quite amazing and they succeeded in rescuing so many Jewish lives that over 99% of the Jewish population of the country survived the Holocaust. The Danish Resistance Movement is honored at Yad Vashem (the Holocaust Museum in Israel) as Righteous Among the Nations and I was always aware of that recognition, but this book taught me more about how the movement succeeded in evacuating the Jewish population to safety in Sweden.

The title of the book is taken from the a psalm read in part of the story, in which it is said that God numbered the stars and called them all by name. By saving the Jews of Denmark, the Danes in essence numbered the Jews – said they each were important, and rescued them from death at the hands of the Nazis.

Finally, I recently finished reading The Nightingale by Kristin Hannah. I had been told by many fellow bloggers, friends, and my mom that this book is a definite must read. While it took me more time to get into than I would have preferred, by the end I was as much a fan of the book as everyone who had recommended it to me.

“In the quiet village of Carriveau, Vianne Mauriac says goodbye to her husband, Antoine, as he heads for the Front. She doesn’t believe that the Nazis will invade France … but invade they do, in droves of marching soldiers, in caravans of trucks and tanks, in planes that fill the skies and drop bombs upon the innocent. When a German captain requisitions Vianne’s home, she and her daughter must live with the enemy or lose everything. Without food or money or hope, as danger escalates all around them, she is forced to make one impossible choice after another to keep her family alive. Vianne’s sister, Isabelle, is a rebellious eighteen-year-old girl, searching for purpose with all the reckless passion of youth. While thousands of Parisians march into the unknown terrors of war, she meets Gäetan, a partisan who believes the French can fight the Nazis from within France, and she falls in love as only the young can … completely. But when he betrays her, Isabelle joins the Resistance and never looks back, risking her life time and again to save others. With courage, grace and powerful insight, bestselling author Kristin Hannah captures the epic panorama of WWII and illuminates an intimate part of history seldom seen: the women’s war. The Nightingale tells the stories of two sisters, separated by years and experience, by ideals, passion and circumstance, each embarking on her own dangerous path toward survival, love, and freedom in German-occupied, war-torn France–a heartbreakingly beautiful novel that celebrates the resilience of the human spirit and the durability of women. It is a novel for everyone, a novel for a lifetime.”

Reading this book while also reading Number The Stars was interesting, because both focused on the resistance efforts of those that saved others during World War II, while this one obviously is written for a much more mature audience. It therefore contains many more details about the difficulties of war and the effects the war had on a variety of people. While most of France’s men went to war, those who remained at home faced hardships too. Although the two sisters in the story were immensely different from one another in personality, when it came down to their characters, they were both willing to stand up and help others in many meaningful ways. I was especially touched by Vianne’s efforts and the acknowledgment received in the end of the book – which yes, I cried while reading.

There were many moving and emotional things brought up by this story and it reminds me that it is important to keep reading these stories, as again there were parts of the history that I did not know about previously. Remembering helps us to prevent such a thing from ever occurring again.

I am linking up with:

Also, I have signed up to participate in the Sweet Progress Box Swap – would you like to join me? 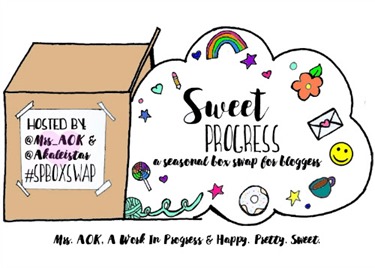