Although the Declutter Challenge has been going on for 8 weeks already, I have not yet shared my progress from as far back as Week #5 – Master Bedroom!  I decided that I will also share my closet this week, but while I did declutter the master bathroom during week #6, I will share that together with the other bathrooms in the house at a later time. 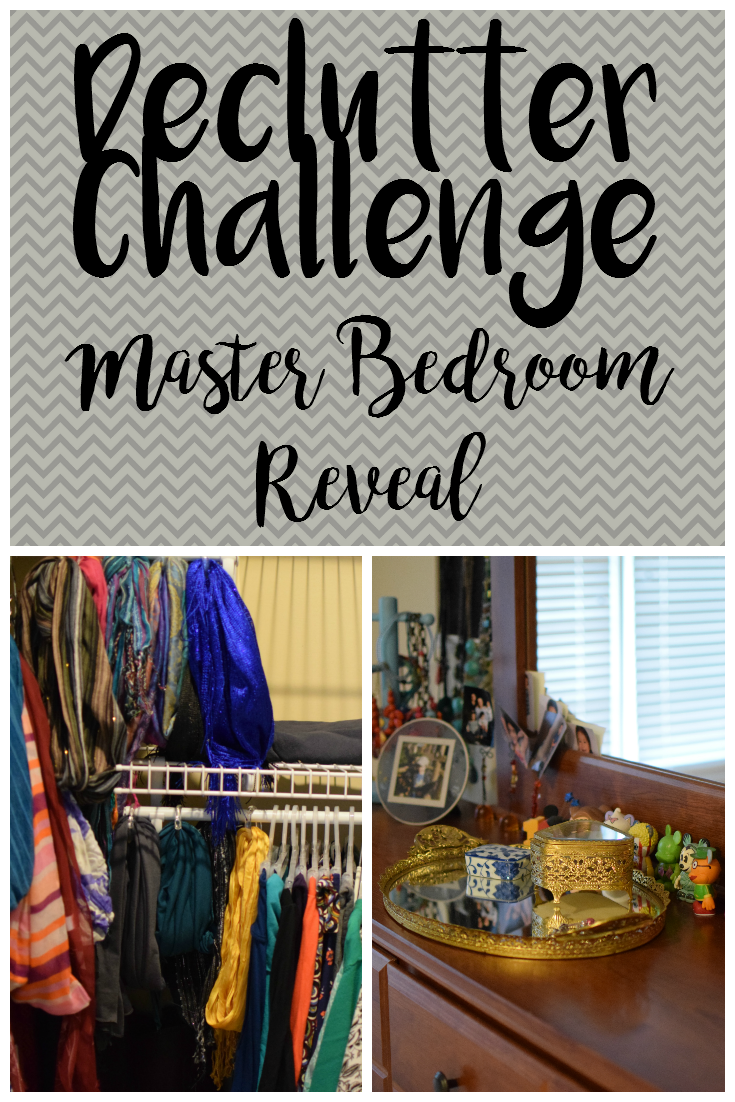 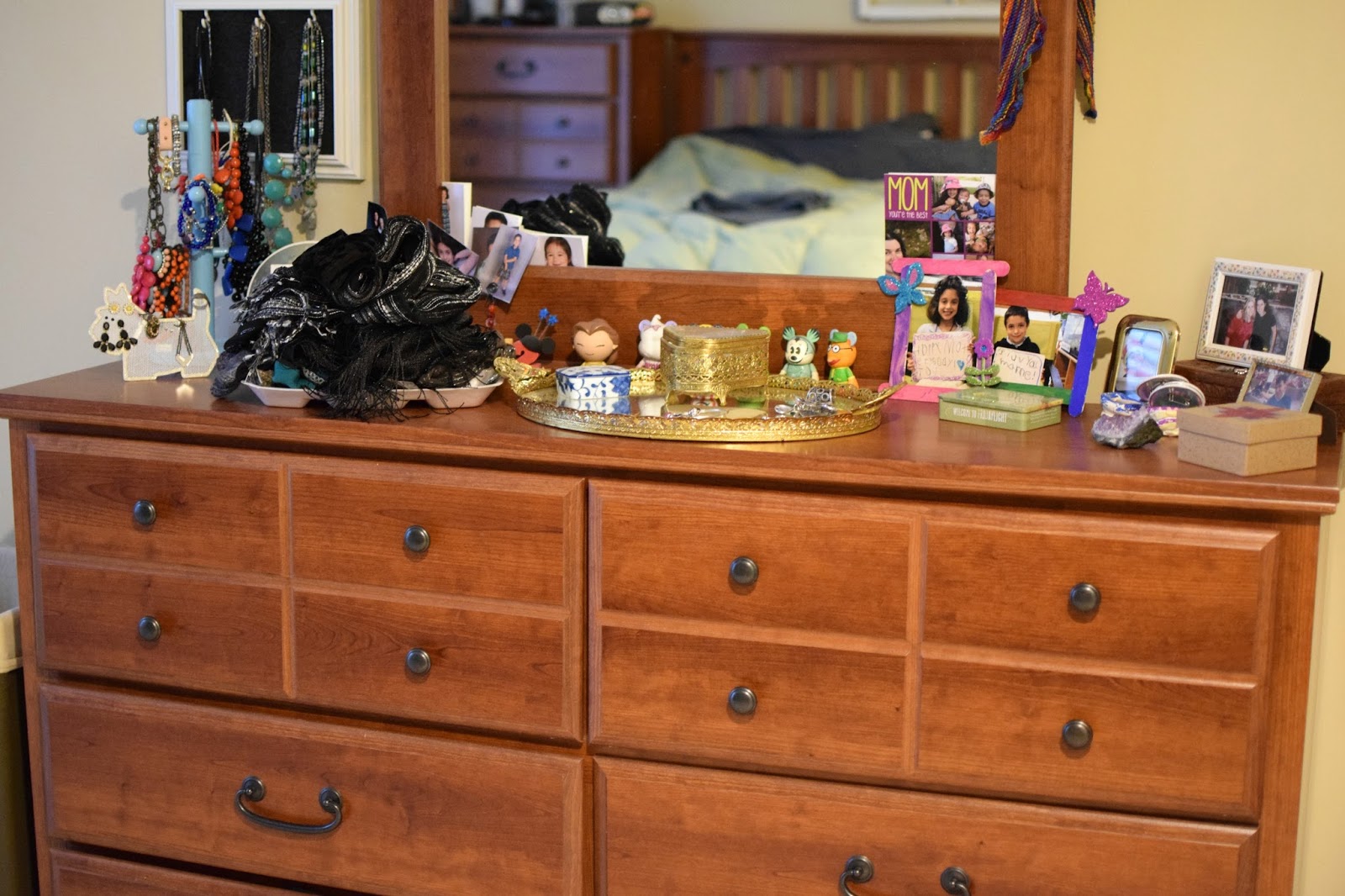 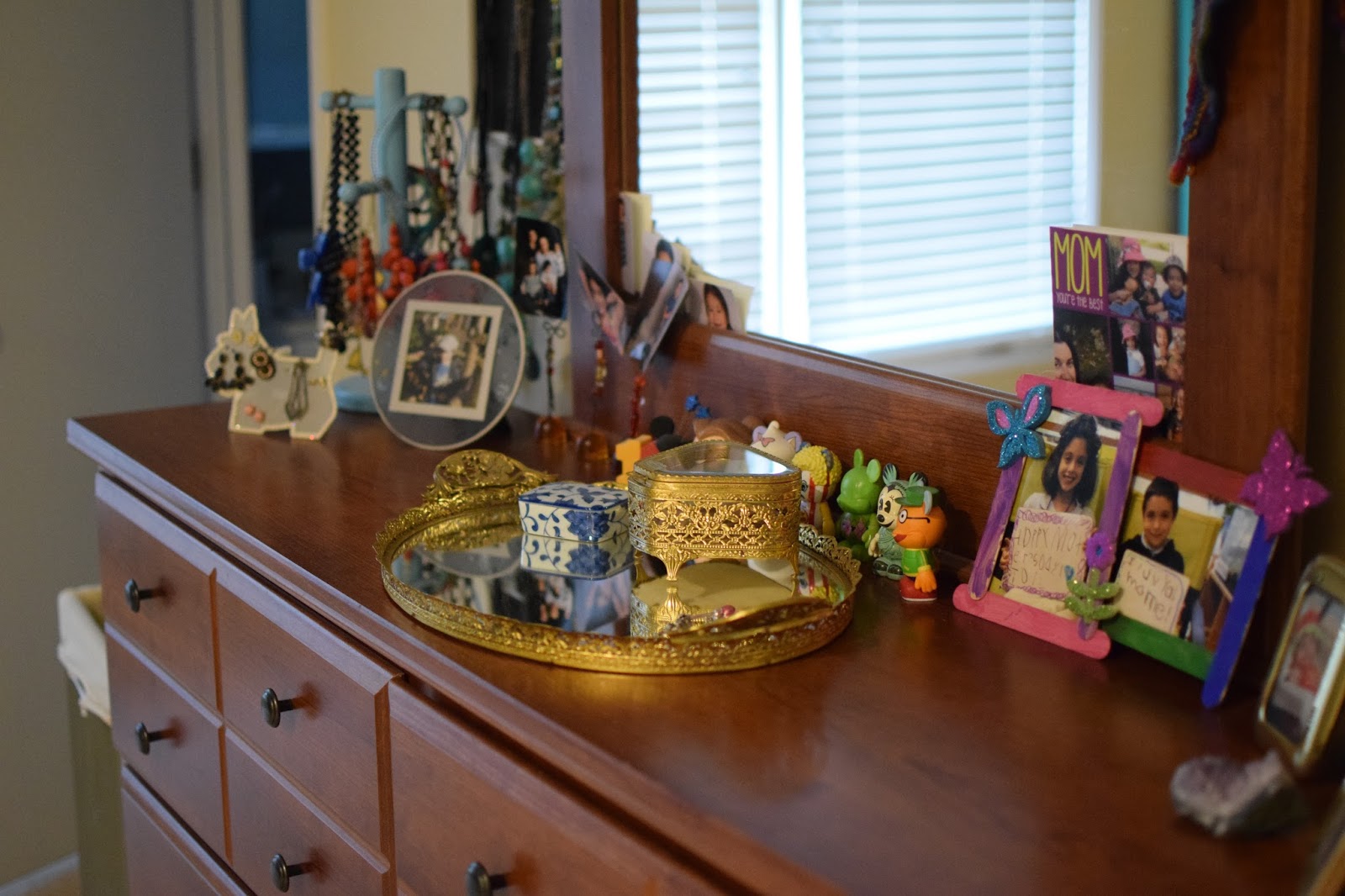 Dresser Top – Before and After.
I have a really nice gold mirrored tray that was my grandmother’s. Prior to receiving it, I was using a Styrofoam tray that Gabbie decorated and gave to me as a Mother’s Day gift. As you can see, I had it piled up with scarves and such – mostly because I didn’t have any room in my closet to keep the scarves! 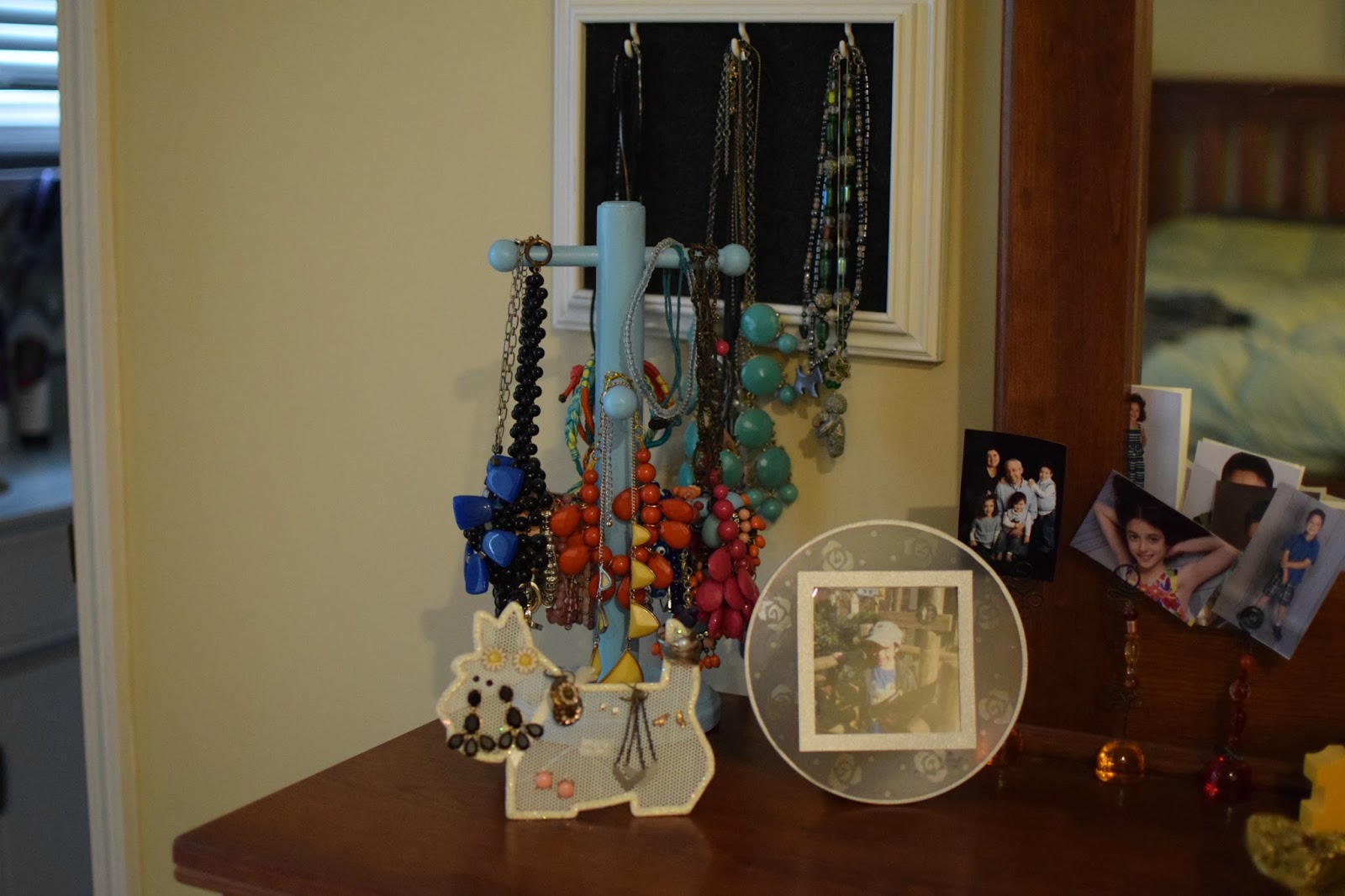 A closer look at how I store my jewelry – on the wall is a frame with hooks for longer necklaces, in the blue is a spray painted mug tree for shorter necklaces and bracelets, and the white Scottie dog is an earring display that a friend bought for me awhile back! 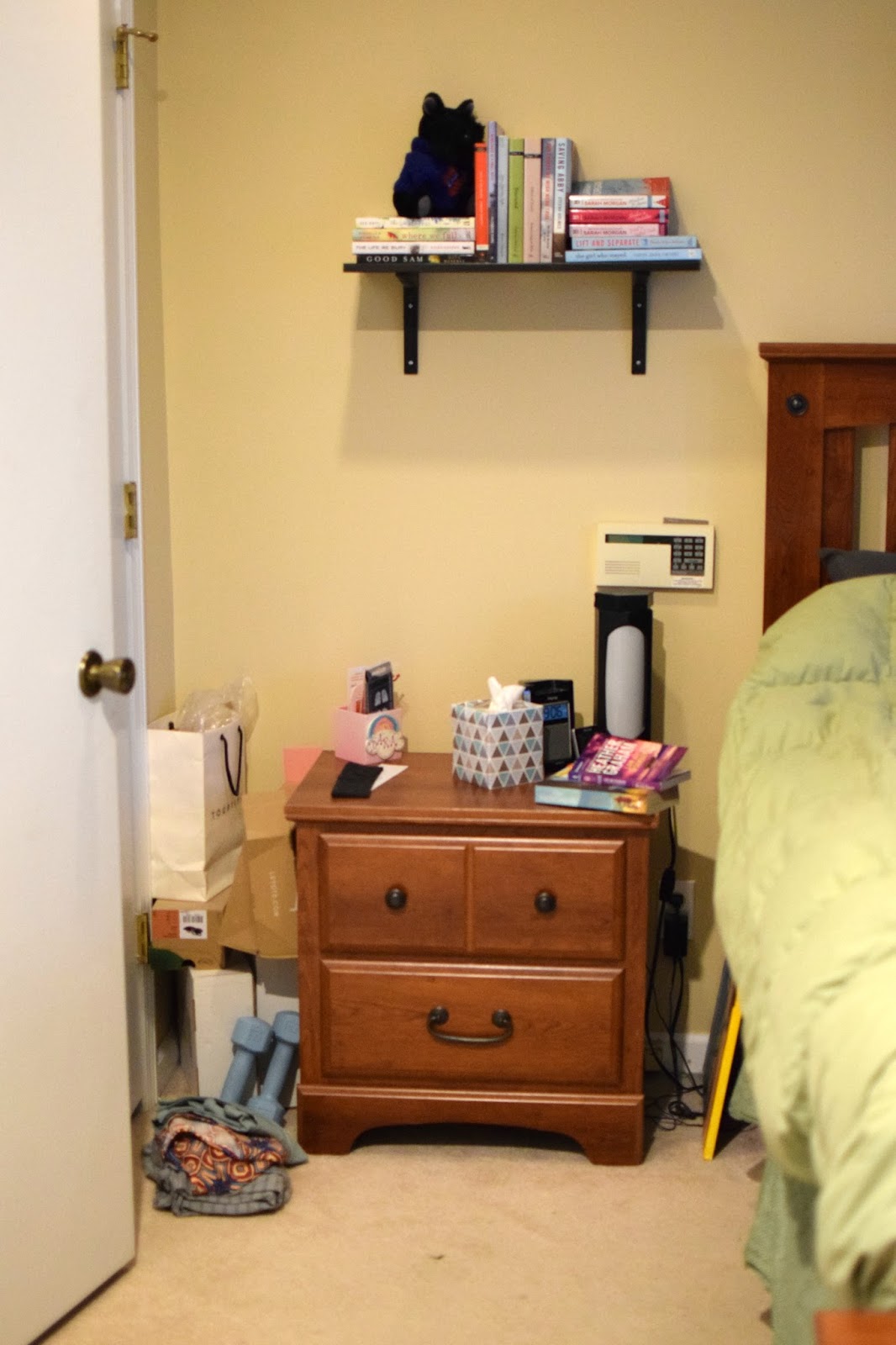 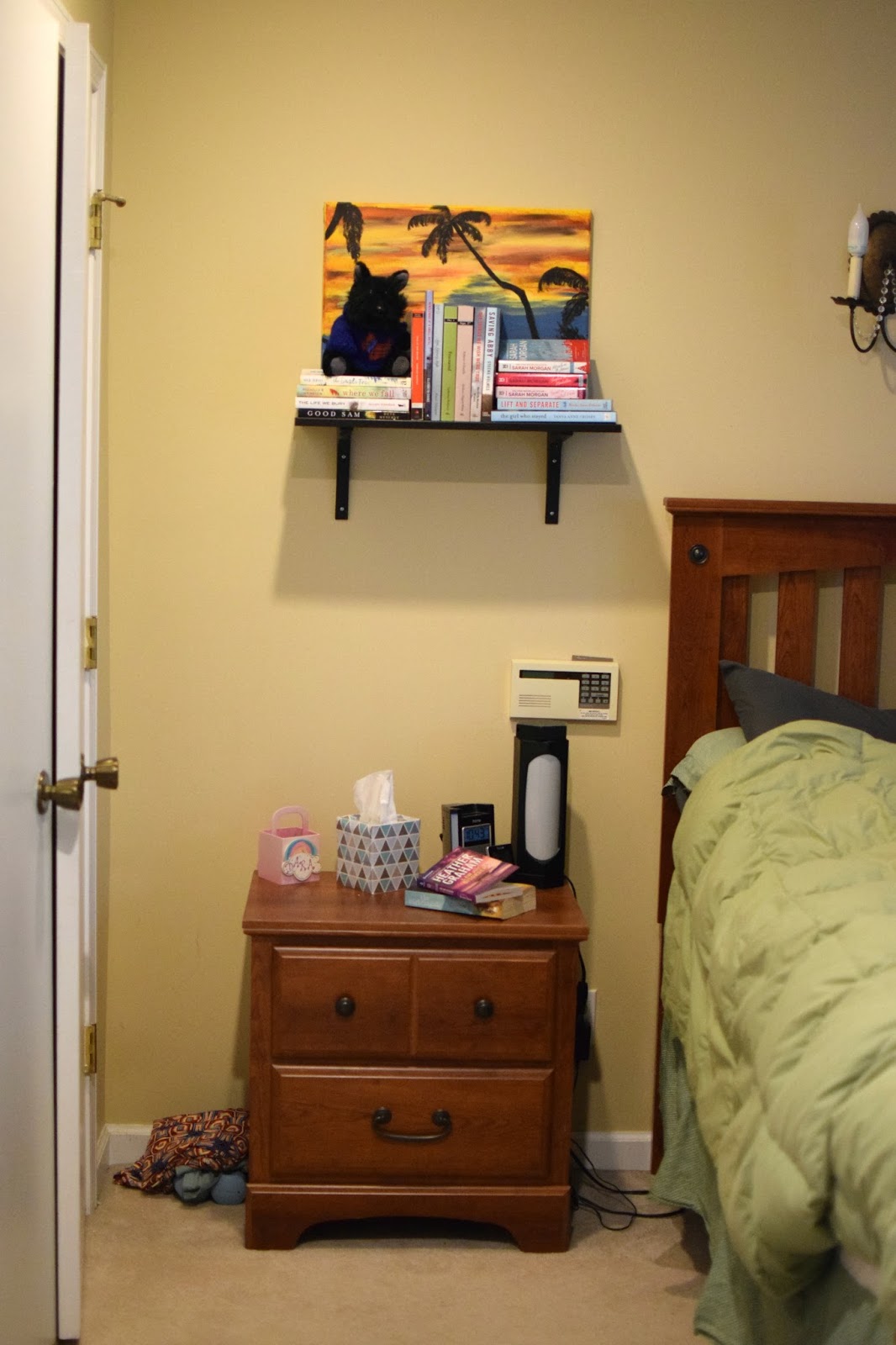 Nightstand – Before and After.
I had a bunch of old boxes that I needed to get rid of on the left side, and on the right was a painting I made over the summer. I finally found a place for it behind the books on the shelf! 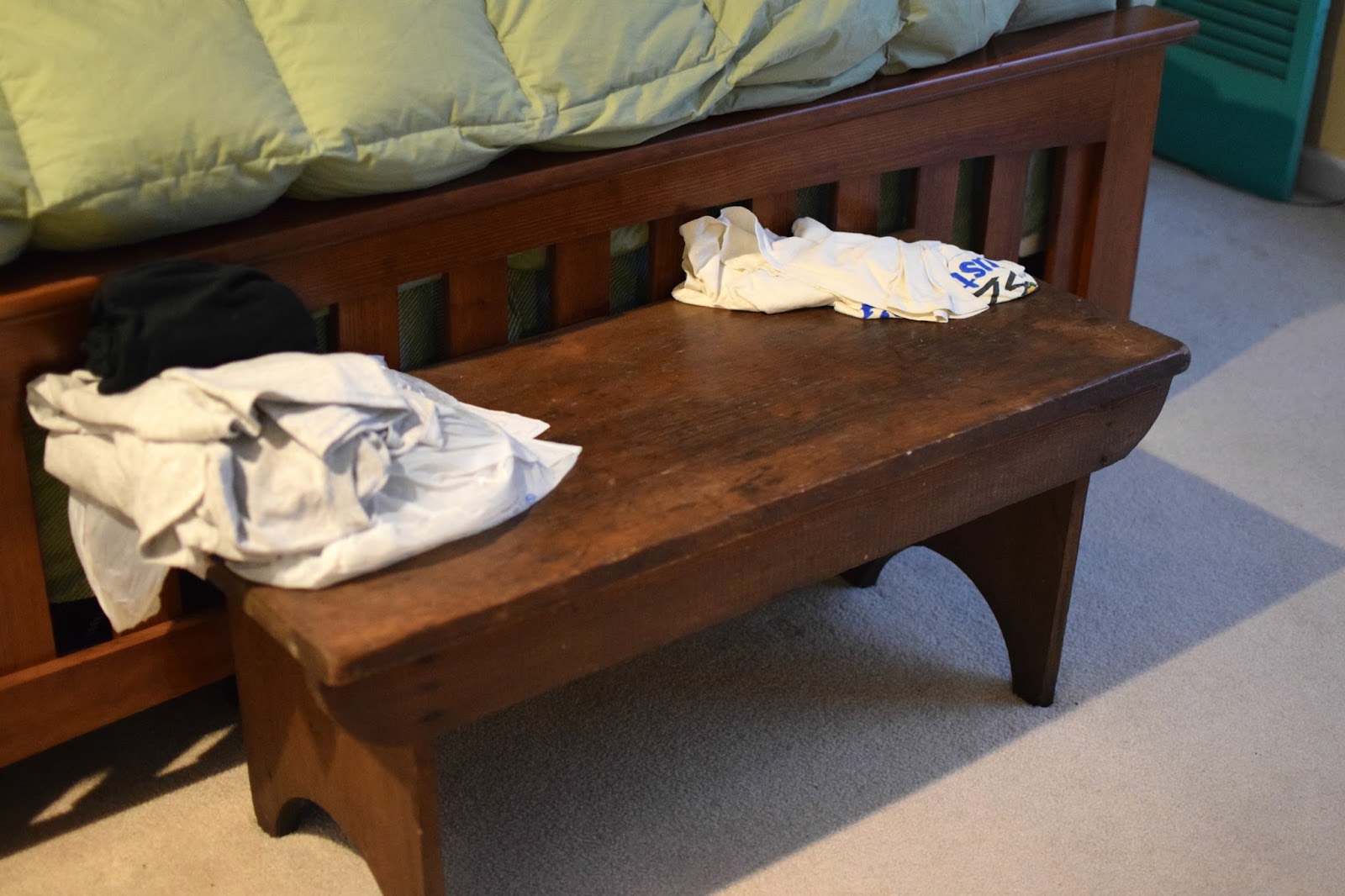 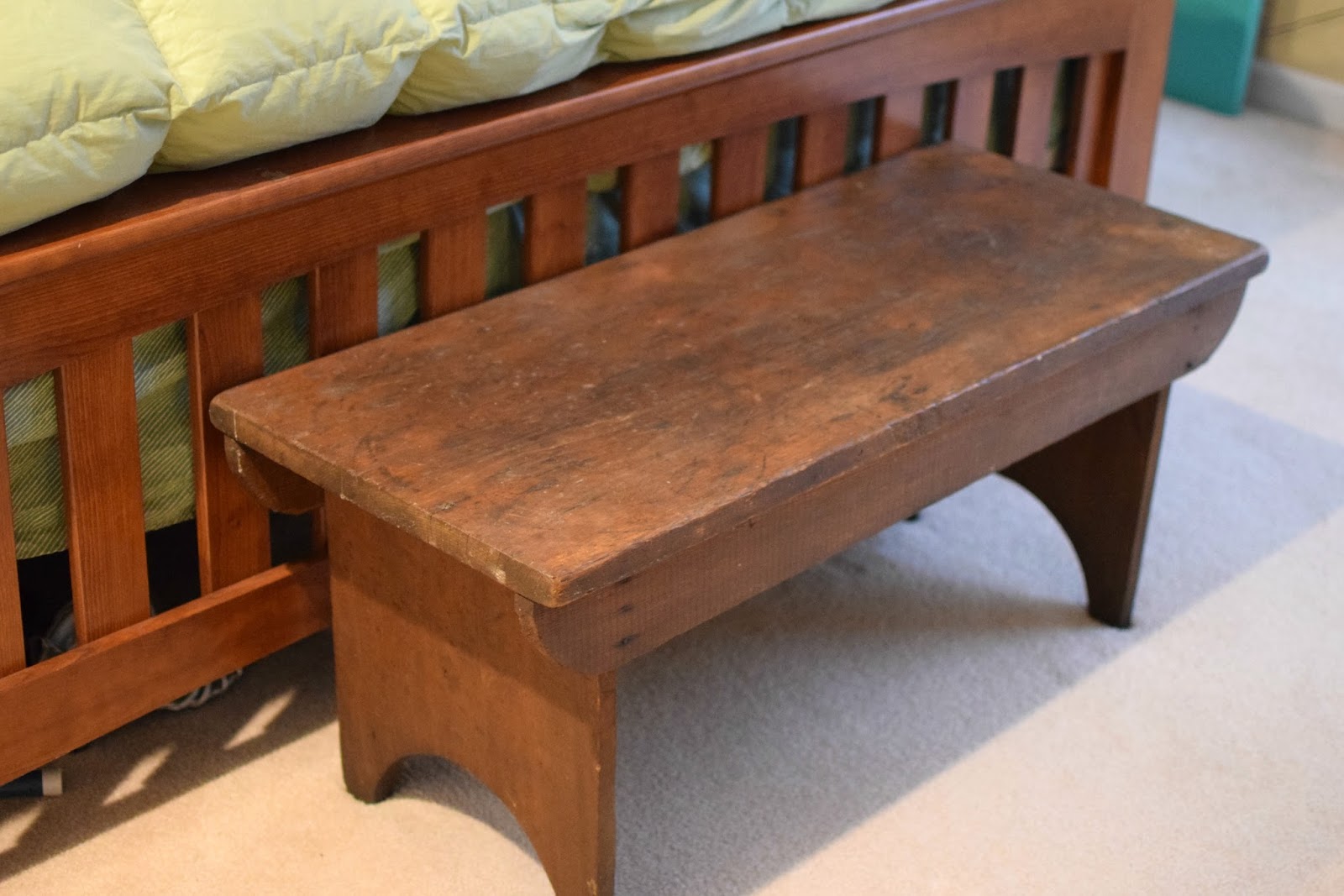 Bench – Before and After.
The bench always becomes a place where we leave things – and even though in the after picture it’s cleared up, right now Dave has another shirt on there! I love this bench – here’s its story! 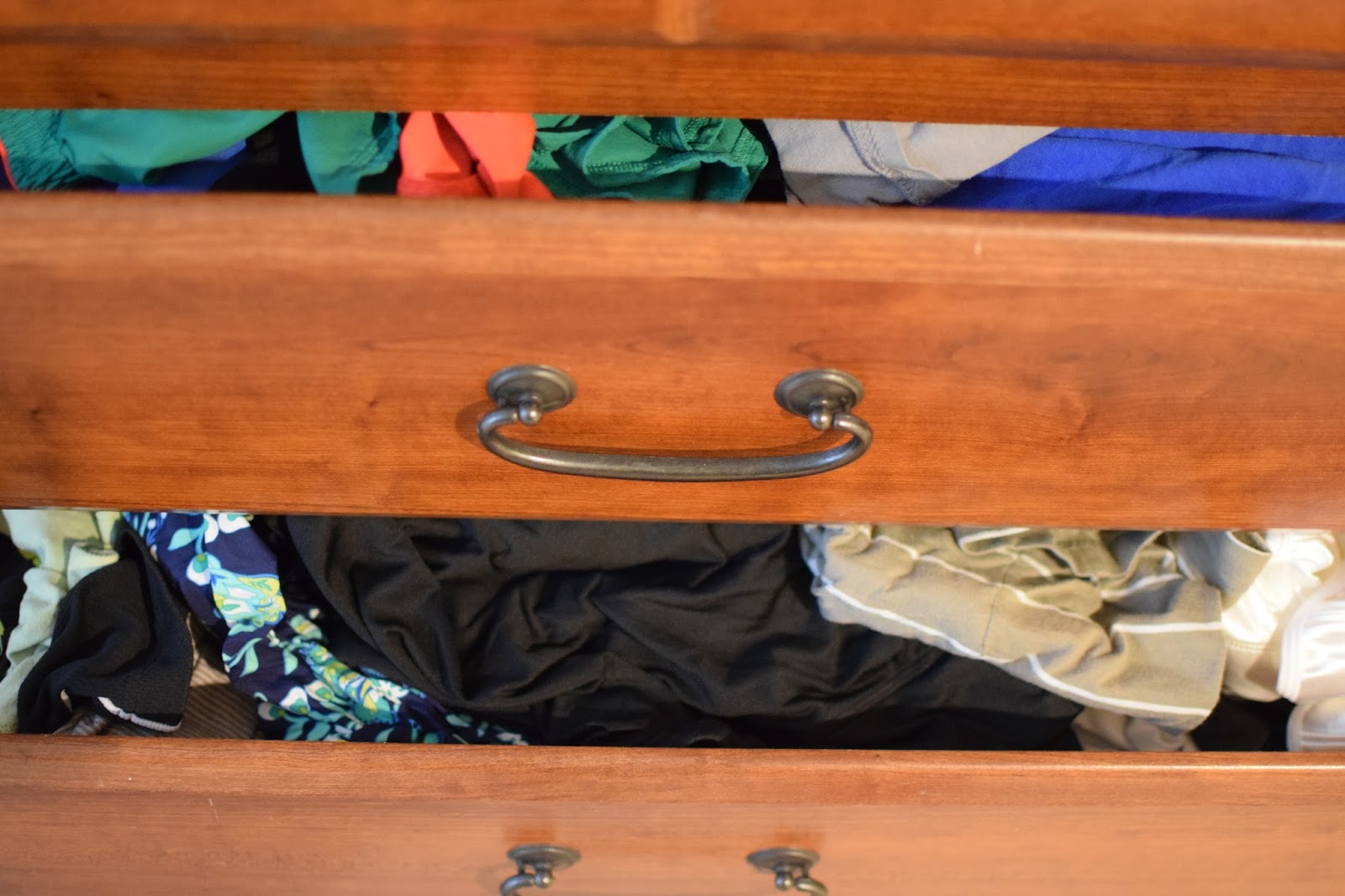 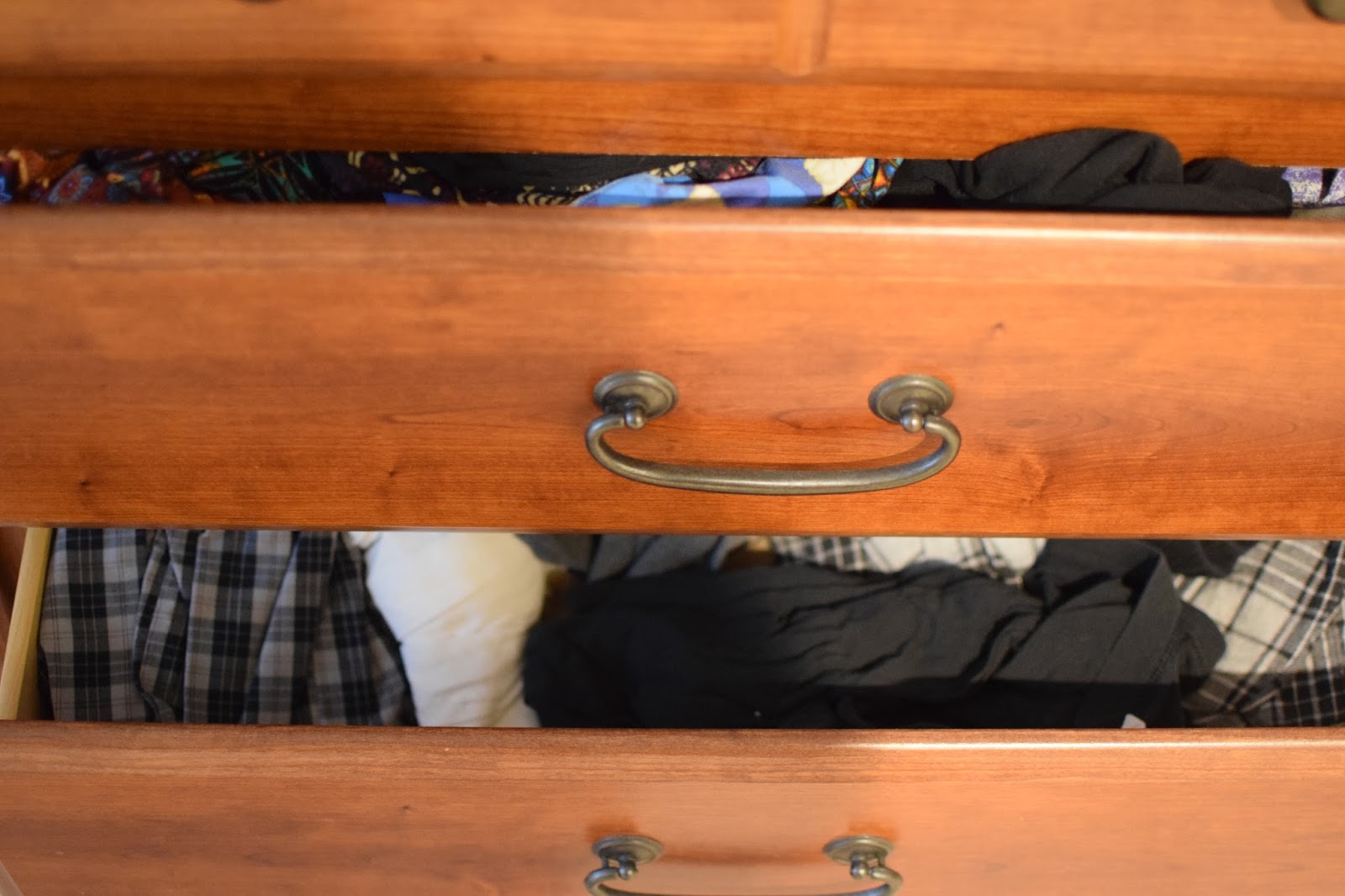 Drawers – Before.
I have a set of 6 drawers. The top right contains my underwear, so I didn’t take a photo! And the top left holds t-shirts, which I recently cleared out, so I didn’t need to go through them again. The drawers you see here are (top to bottom):
Gym Clothes
A Mess of things like Bathing Suits and Pajamas
Leggings and Tank Tops
More Pajamas and Tights.
As you can probably tell, the drawers were mostly so overstuffed that I could hardly open them! 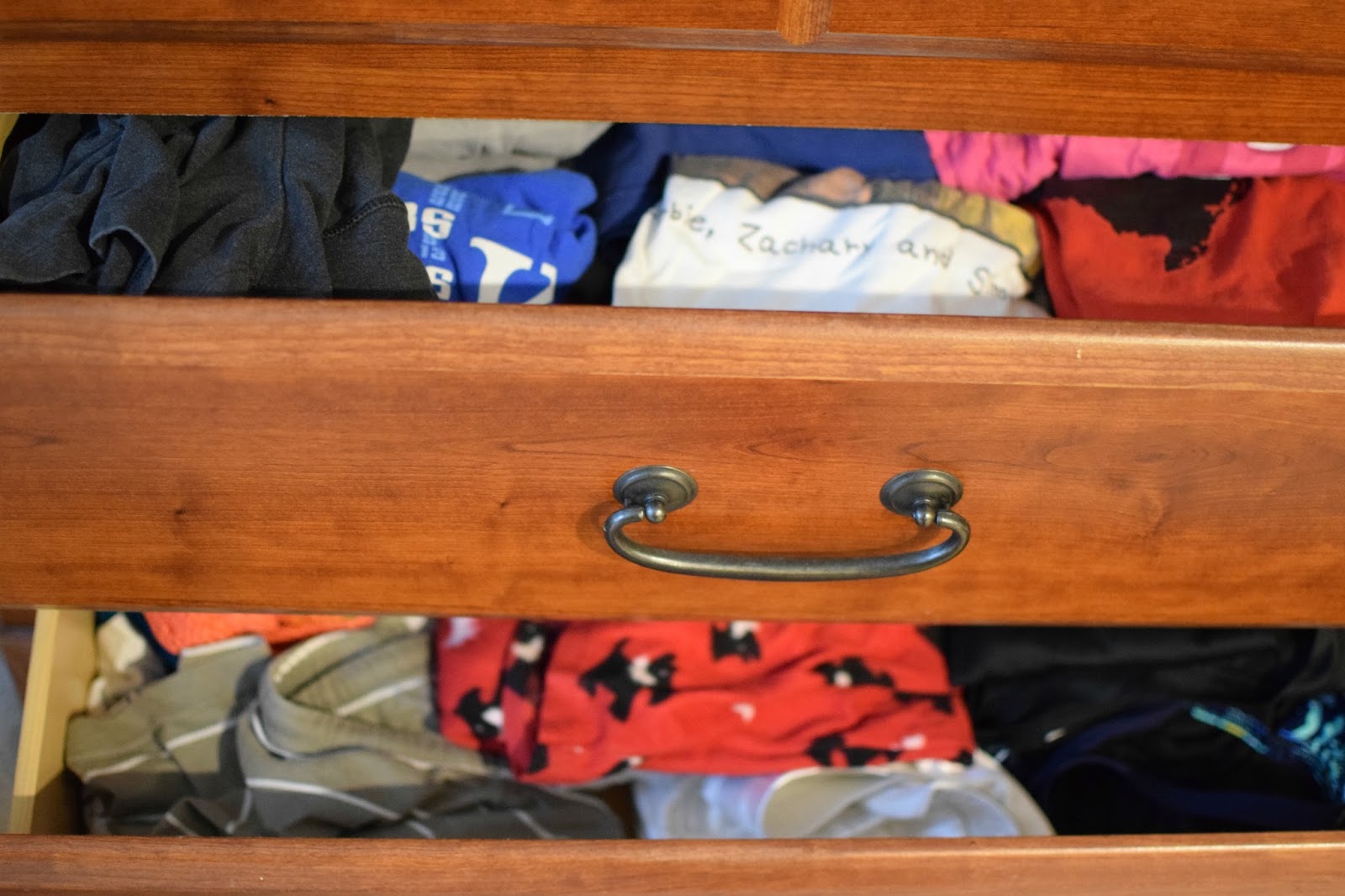 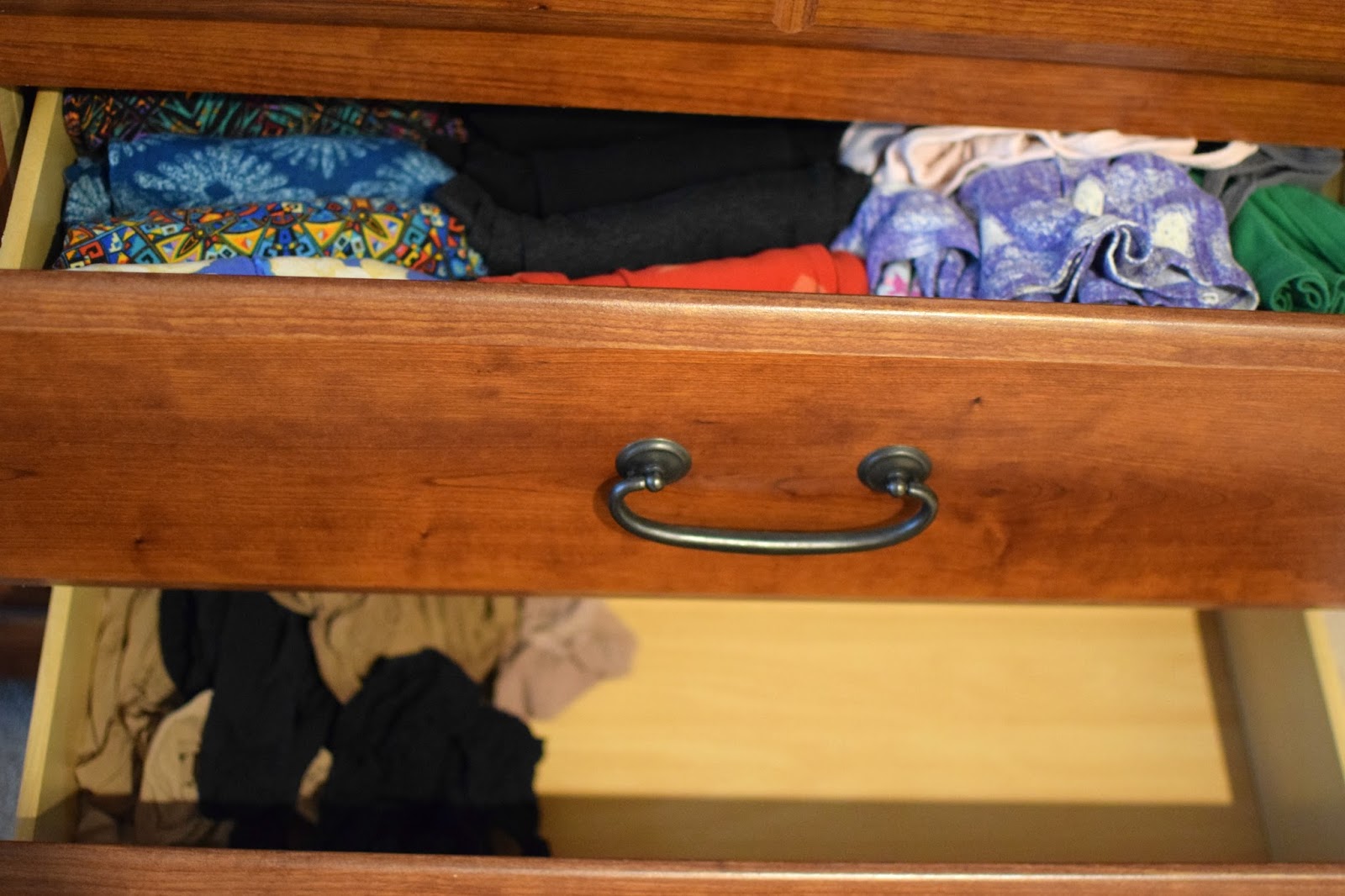 Drawers – After
Here they are again from top to bottom:
Gym Clothes
Pajamas and Bathing Suits
Leggings and Tank Tops
Stockings and Tights – and I later moved my shorts out of the closet and into that bottom drawer.

It is so much easier to get out and put away my clothes with the drawers less stuffed full!

Next up, the closet. 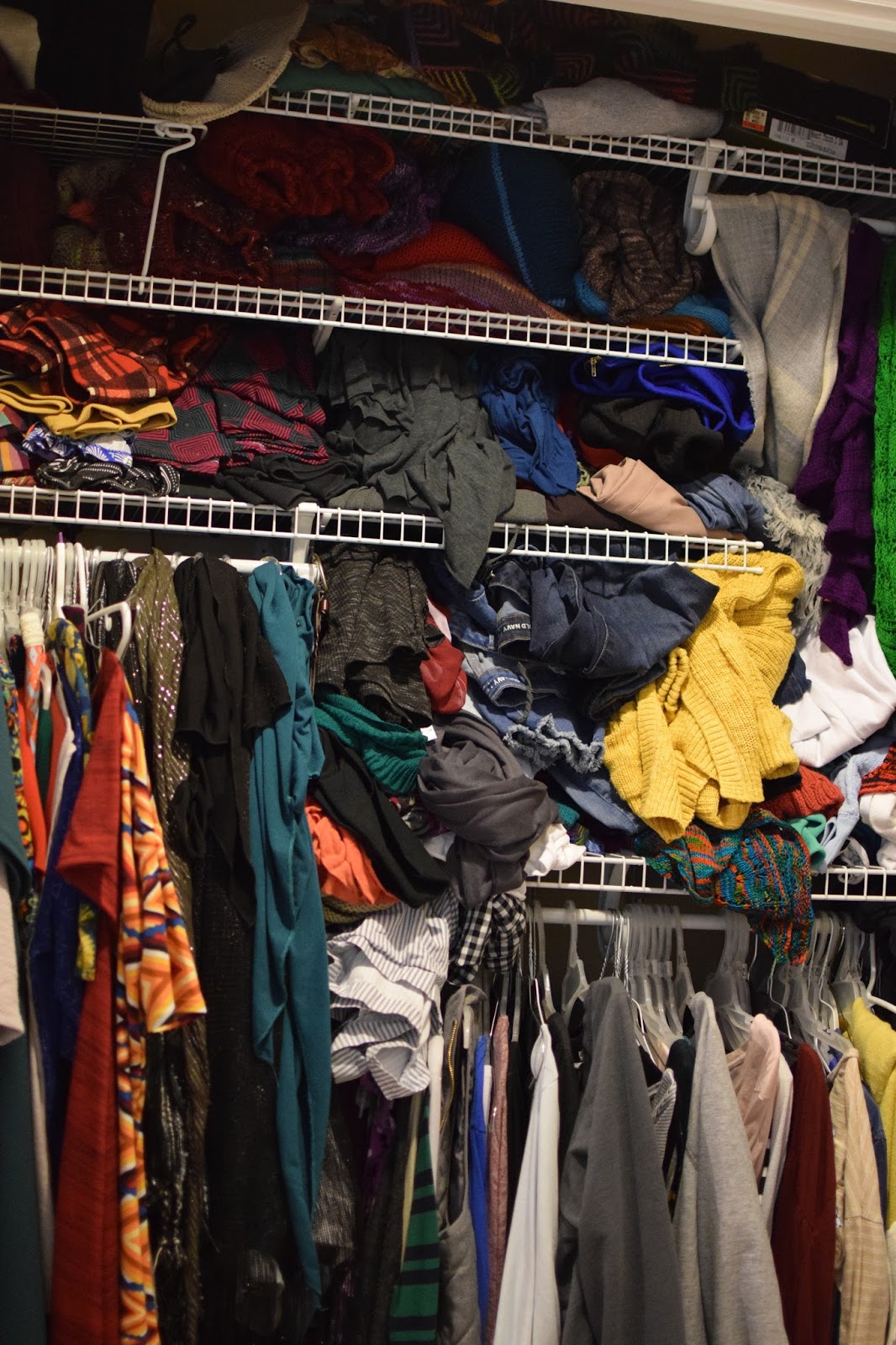 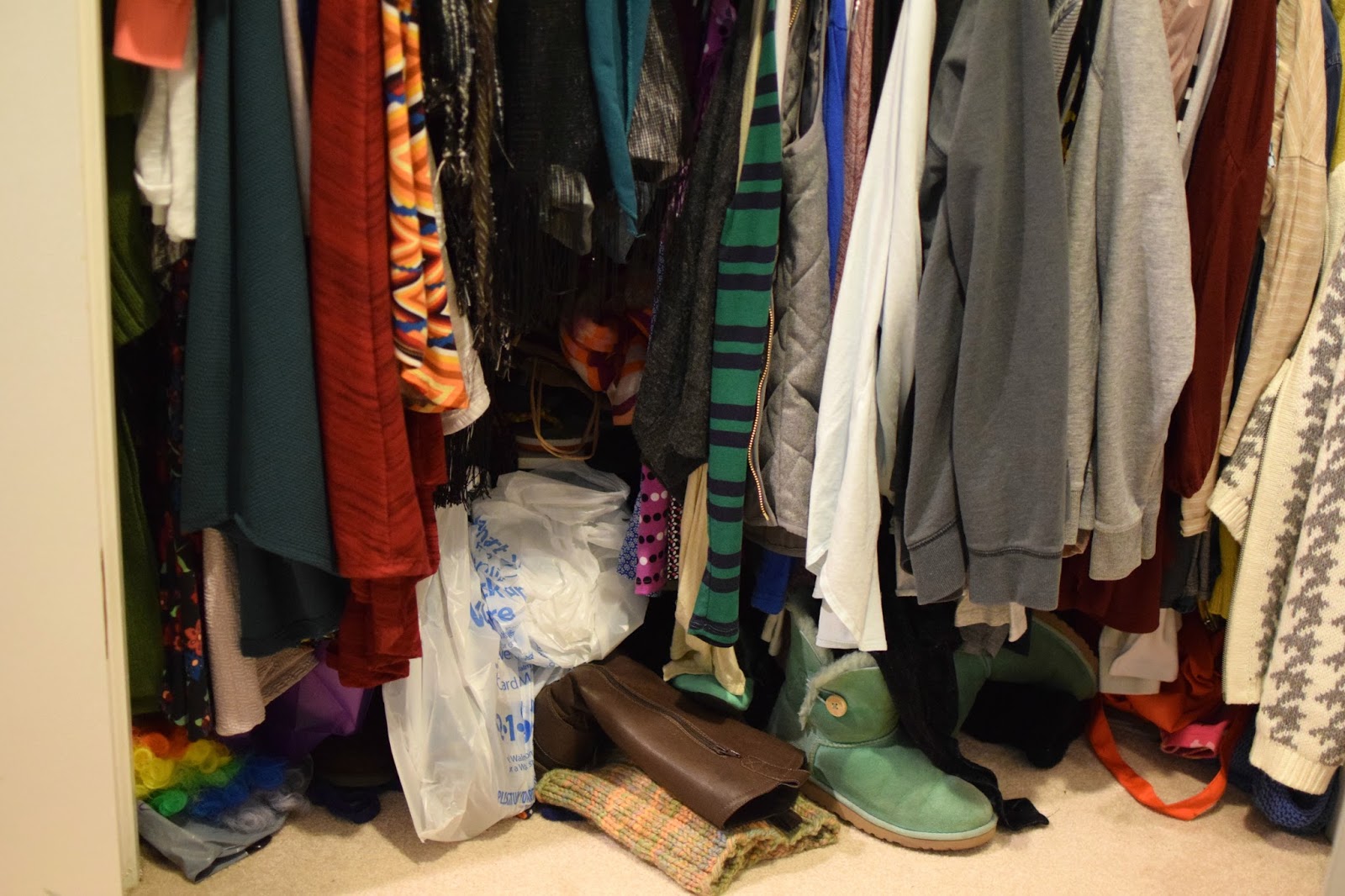 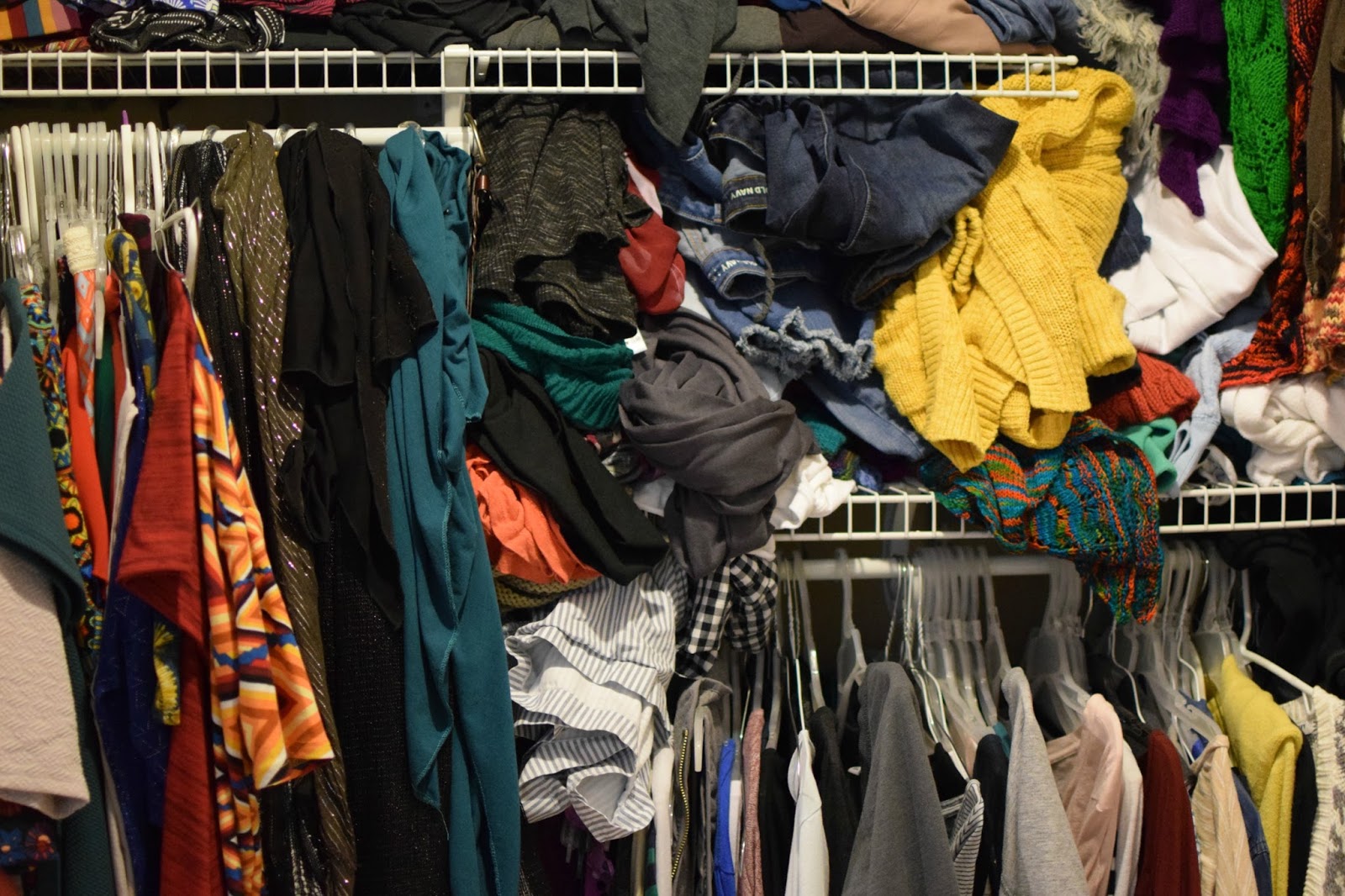 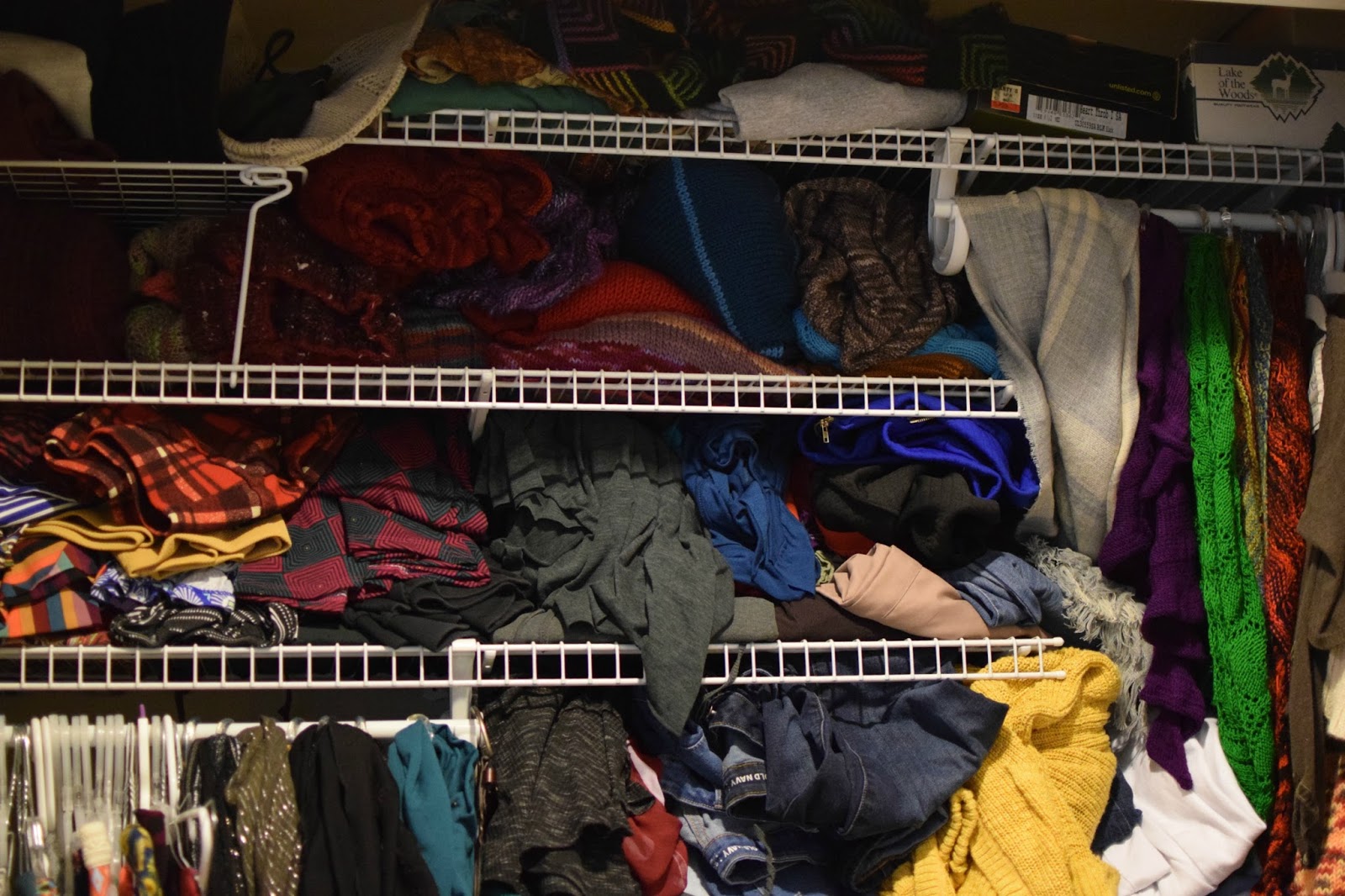 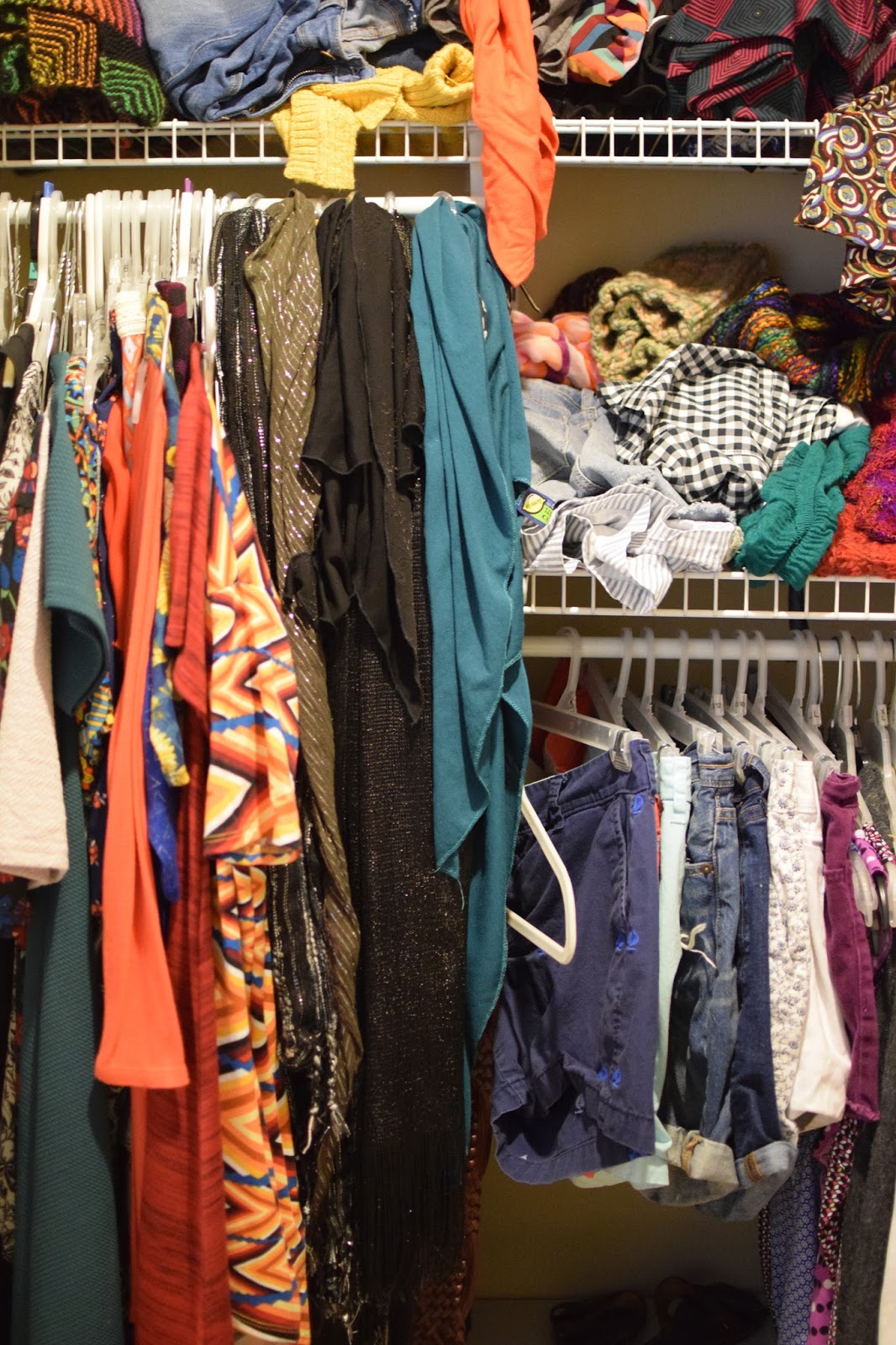 Closet – Before
I’m kind of embarrassed to post these! I have clothes falling out everywhere! In the past I had knitted a lot of sweaters that I basically never wear, so that’s what was mostly taking up the top shelves here. I started by taking out everything that I no longer wear. There were a few things that had me wondering if now that I remembered them I’d actually wear them again, but I mostly got rid of those things too. I put everything into bags for donation and with everything removed, my closet looked almost completely different! Then I started reorganizing what was left. 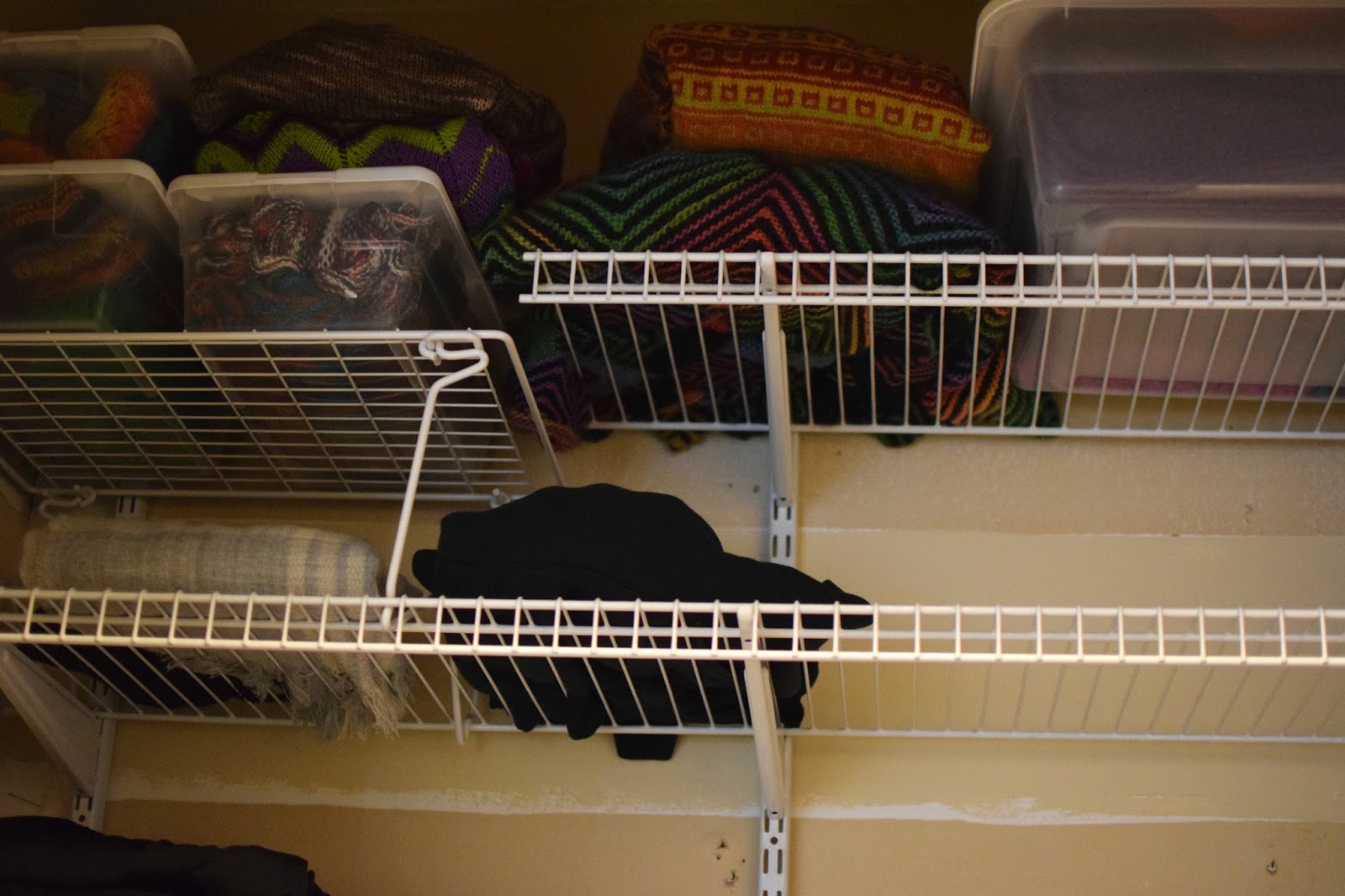 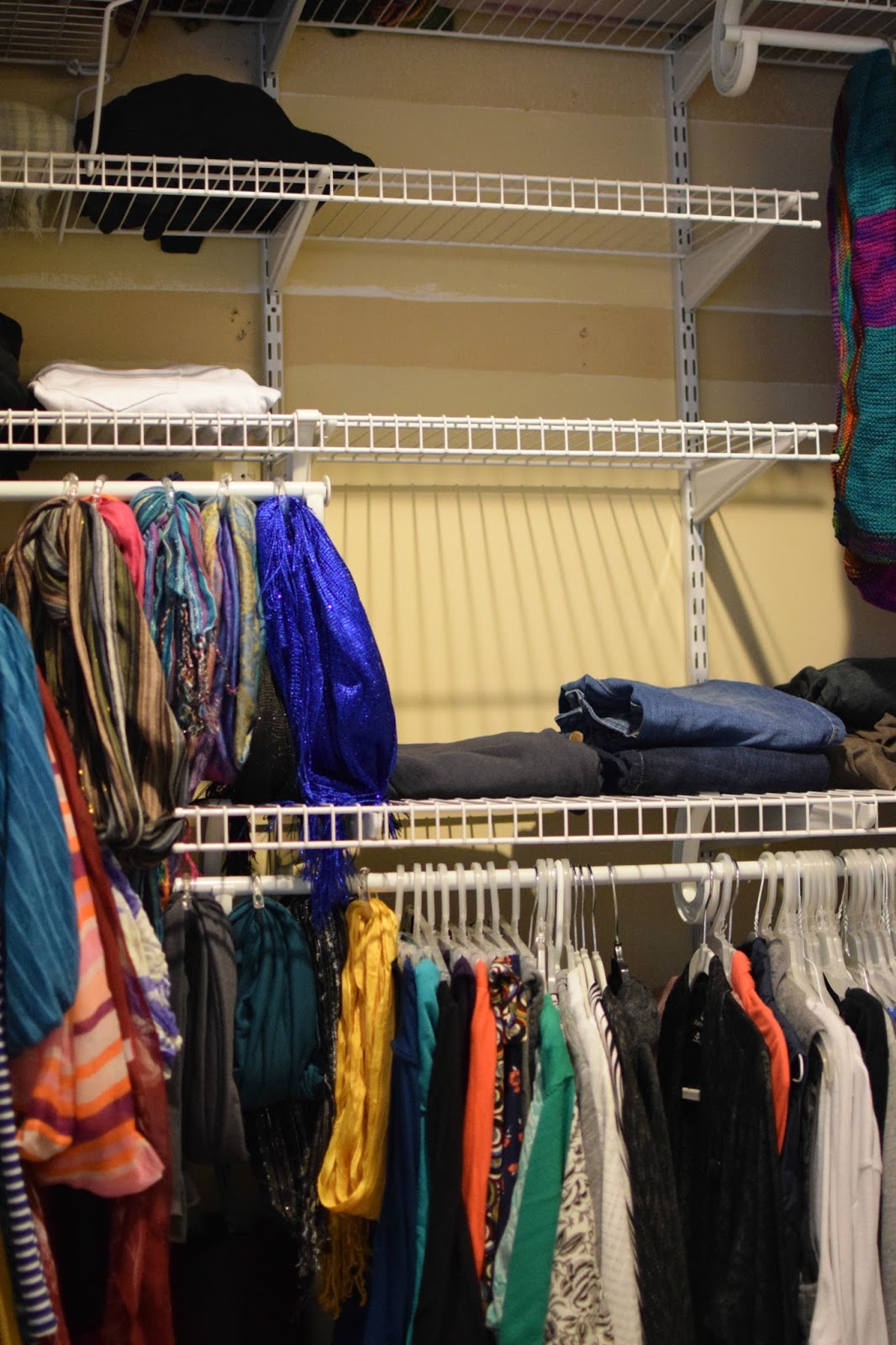 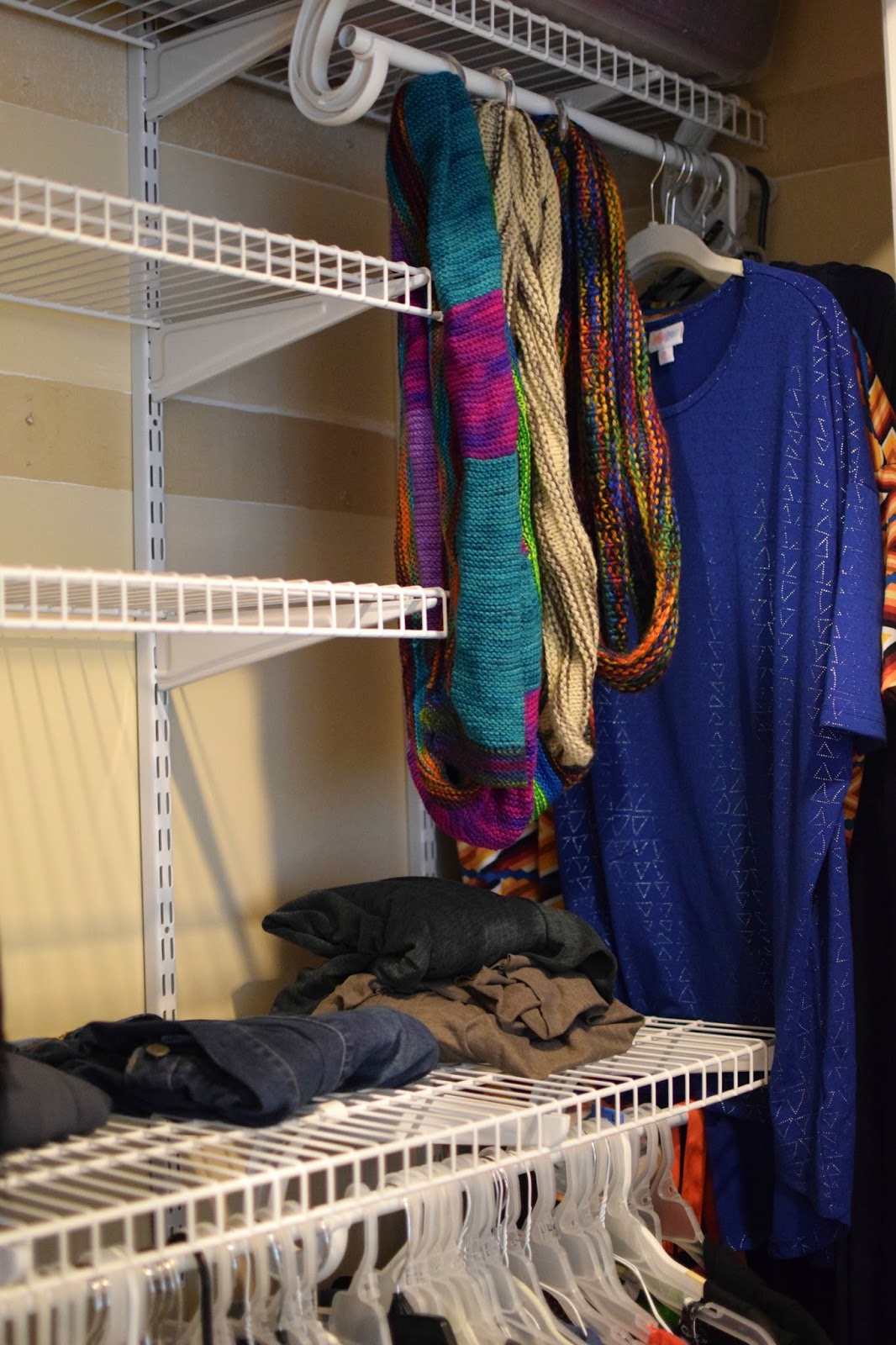 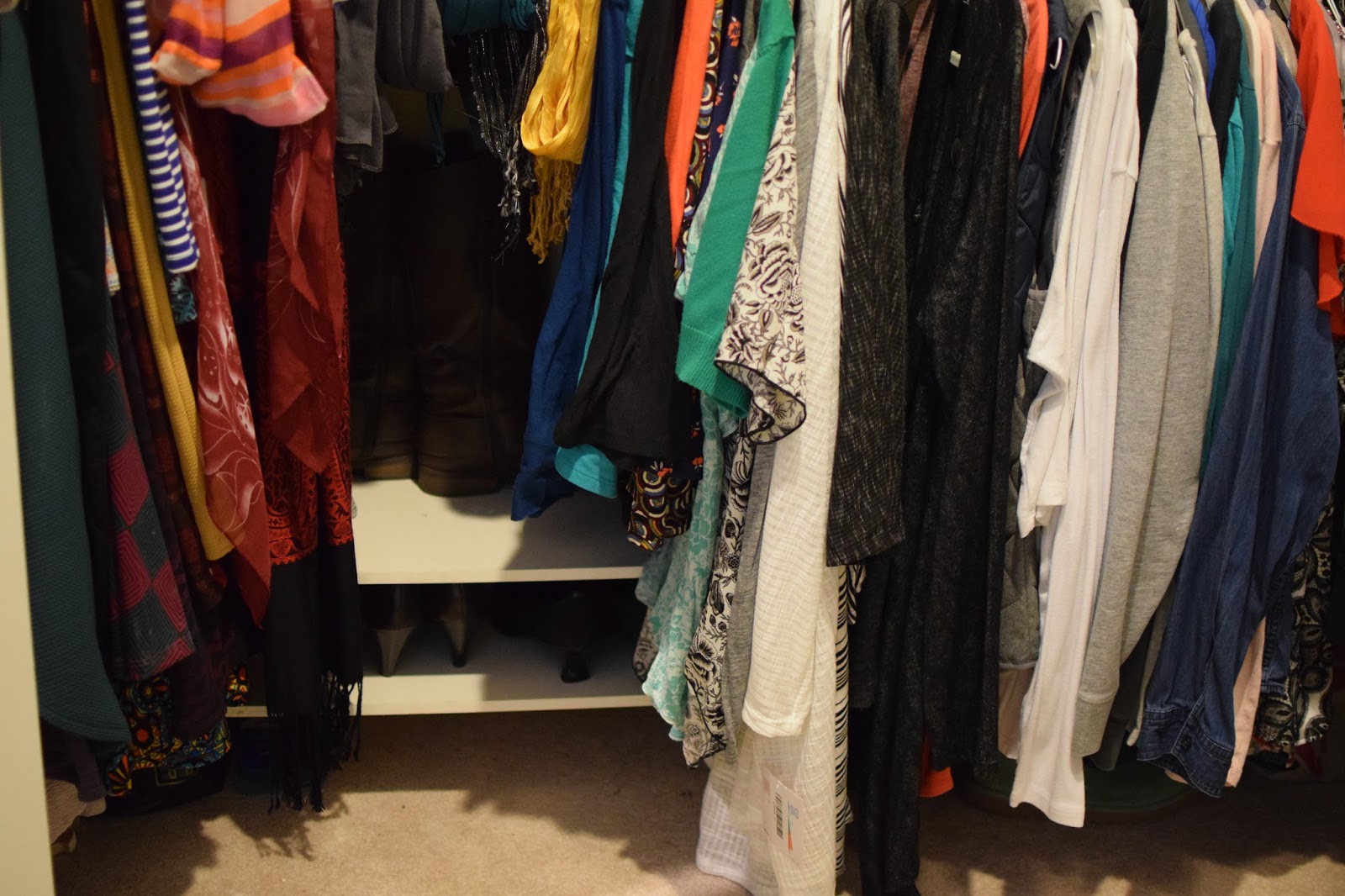 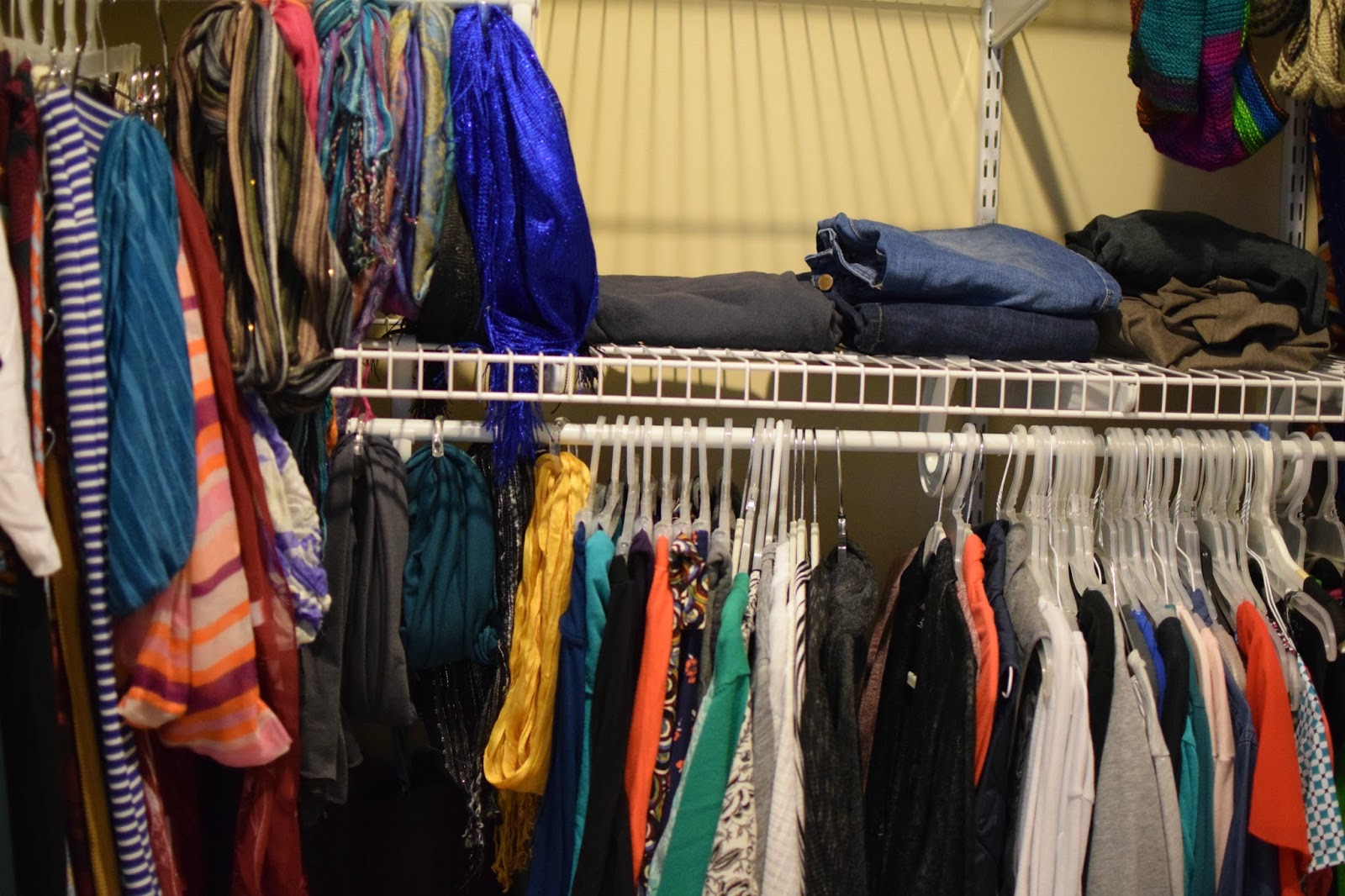 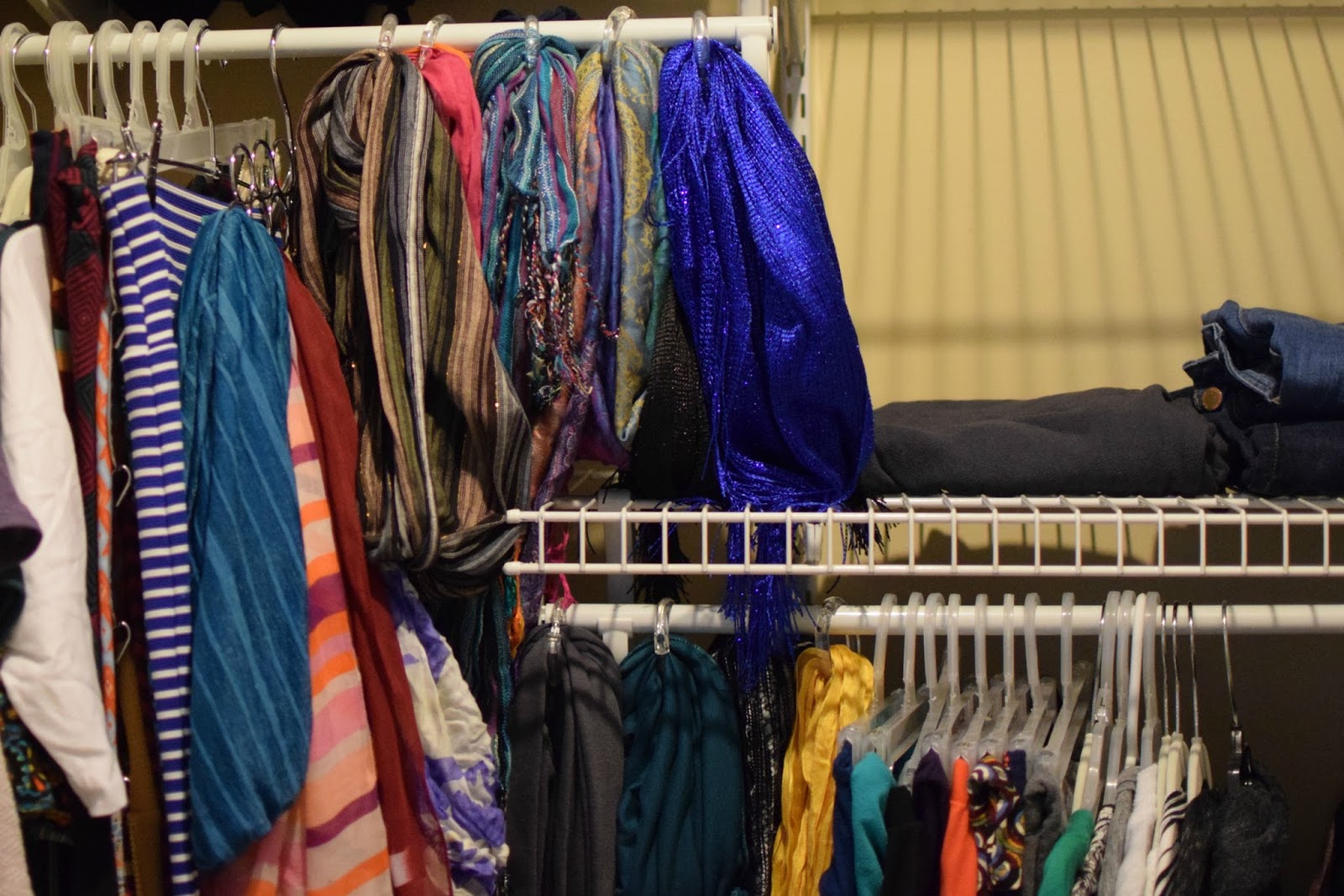 Closet – After
I put most of my knitted items into containers because I want to keep them since I made them, but I don’t need to keep them out on display. The exception is the few scarves hanging on the top right. I sorted my shirts by putting cardigans and vests first, followed by long sleeves, followed by short sleeves. I will probably move the short sleeves to the middle in the summer time. I hung scarves in the areas that are too short to hang long items, plus there is a scarf hanger next to that for a few others. I hung my skirts where my shorts were previously and moved the shorts to the drawer. To the left outside of the photos are my dresses and longer sweaters, which were previously bunched on the shelves, along with scarves, jeans, skirts, and who knows what. I left jeans and a few longer skirts folded on the shelves – which by the way came with our house! On the bottom of the closet I have a shoe rack that I’ve had since I was growing up, and I moved several pairs of sandals and flip flops from under my bed and put them in the closet. I also vacuumed under the bed. I was going to take a picture of the piles of dust I removed, but it wasn’t very pleasant!

Bonus – I inspired Dave to clean out his closet too! He found this hat inside – I guess he felt it necessary to wear while decluttering! 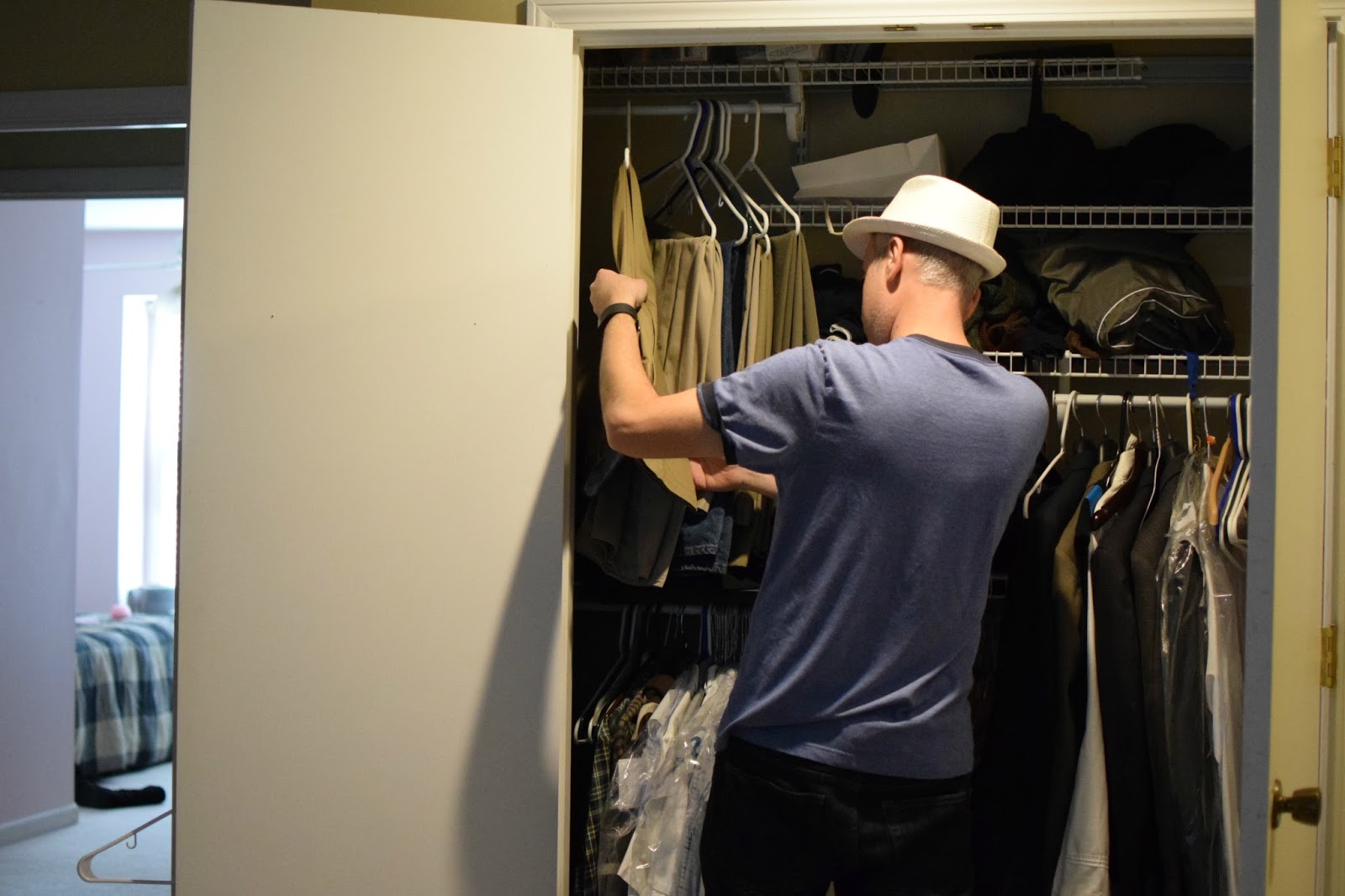 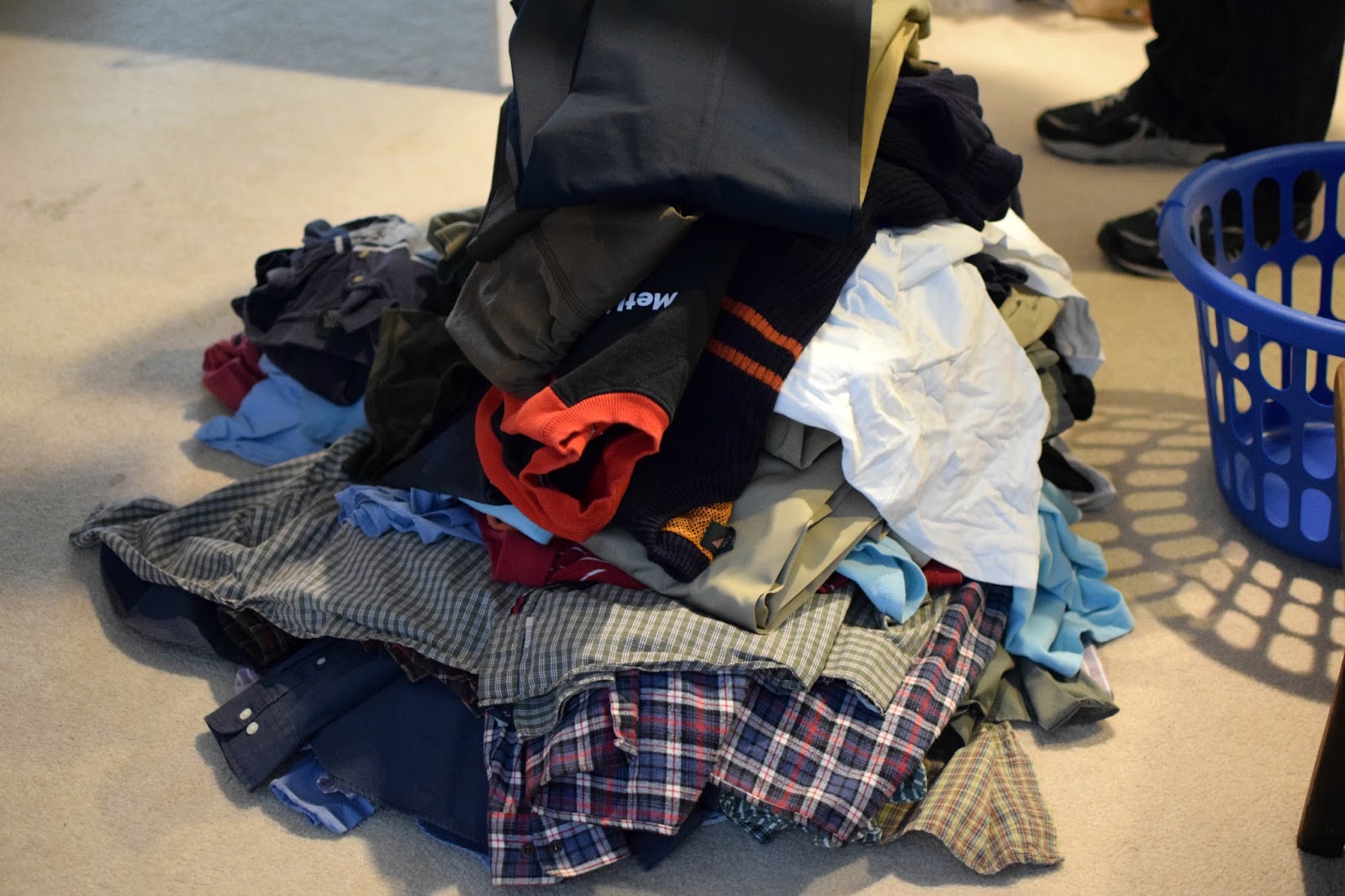 More piles of clothes to donate!

What do you think of my bedroom reveal? How is your decluttering going?