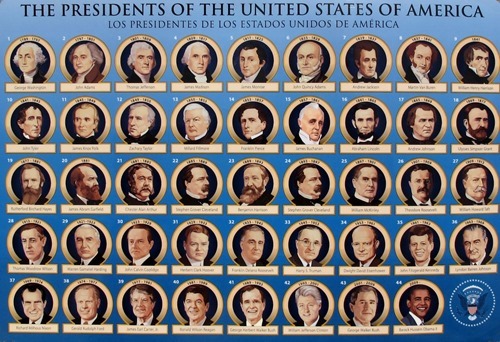 In honor of Presidents’ Day, a few interesting Presidential Facts:

1. Martin Van Buren was the first to be a United States citizen. All previous presidents were born British subjects.

3. Jimmy Carter is the first known president to go on record as seeing a UFO.

4. James Earl “Jimmy” Carter was the first president to be born in a hospital.

5. James Buchanan is the only bachelor president. He was inseparable from William R. King, a senator from Alabama, earning the pair the nickname “Miss Nancy and Aunt Fancy” and “Mr. Buchanan and his wife.”

6. The following presidents are known to have had lovers outside of marriage: Warren Harding, Lyndon Baines Johnson, Dwight D. Eisenhower, John F. Kennedy, and Thomas Jefferson.

7. When Martin Van Buren wrote his autobiography after serving as president from 1837-1841, he didn’t mention his wife of 12 years. Not even once.

8. John Tyler had more children than any other president. He had eight by his first wife and seven by his second. He was 70 when his last child, Pearl, was born. He was also the first president to get married in office, though his eight children form his first wife did not approve of the wedding and did not attend.

9. William Henry Harrison holds the record for the longest inauguration speech in history at 8,578 words long and one hour and 40 minutes. Unfortunately, he gave the speech during bad weather and a month later, he was dead from pneumonia, making his the shortest presidency on record – 32 days long.

12. Abraham Lincoln was the first president to ever be photographed at his inauguration. In the photo, he is standing near John Wilkes Booth, his future assassin.

14. No president has ever been an only child.