You did it. You finally allowed Olivia and Fitz to be together. You had Olivia tell Fitz that she wanted him. You had her say “yes,” she was with him, and you had her go on TV and say that she could not fall out of love with him. In just last week’s episode, Olivia told Abby she wasn’t ready to be done with her relationship with Fitz and she was seen as devastated when Fitz left her alone in the interrogation room. And then? You broke them up yet again. For many of us, it’s the last time we’ll be around to watch. They could have been good together and we saw bits and pieces of that this season, but you just couldn’t do it. You put them together in the extreme and then tore them apart.

Shonda Rhimes believes in strong women being alone. She and Oprah talked about how neither of them want to get married, and Shonda stated that she does not want a husband in her house. She obviously wrote Olivia to take after herself, and Olivia finds herself alone and happy on Christmas Eve, chilling on her new couch with her wine and her popcorn and her Christmas tree, having just come from a drive-through abortion and a fight with Fitz in which she told him that she preferred him when he was unavailable and she didn’t have to be with him in his every day life. Olivia leaves the White House Fitz is left solely on his own. 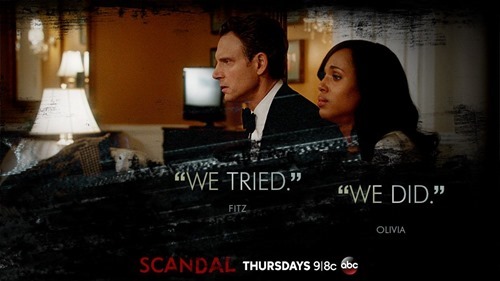 “We tried,” they say. Well, Scandal Writers, you tried. You tried to show me that a woman doesn’t need a man to be successful, but not only that, a woman CANNOT have love and success at the same time. You put Mellie on the Senate floor fighting for women’s rights and Planned Parenthood funding – something she of course couldn’t have done when she was First Lady. You put Olivia in the First Lady role and you made it so that being in that role meant she couldn’t be herself. You tried to prove that a woman can’t have love in her life and also make a difference in the world. You turned Fitz into the bad guy and you asked me to be happy that he was left alone with no one, because he is a man.

You tried to teach me that an abortion should be as simple as a flu shot; that a woman should be able to have a surgical procedure and then immediately run around looking for alcohol (and drink it) with no physical ramifications; and of course that it should be okay to do all of this without bothering to mention it to your so-called love that you yourself chose to be with. What you’re telling me is that it is easy; that it is no big deal. As Tony Goldwyn said in the Hollywood Reporter: “I feel like she disassociated from it. To me, that’s what was so disturbing about that abortion scene: it was so mundane. She went in and did it with no emotion. Boom. It was as if she didn’t connect with it at all. It just happened.” And that’s what you tried to convince me was perfectly fine.

Scandal Writers, I’ve been invested in this show for two years. I know many others who became disgusted and gave up on Scandal way before I did, and I believe that is in part due to my starting the show later than they did. Two years ago, I had just finished watching Seasons 1, 2, and 8 episodes of Season 3 in a row. Little did I know that things would only go downhill from there. You tried to tell me that this season would be different; that Olivia and Fitz would be together “At Last,” but you turned Fitz into someone I didn’t recognize and you made Olivia grow to despise being with him. I know you will try to tell me that this show wasn’t meant to be a love story. If that is the case, I wonder why you wrote such beautiful scenes between Fitz and Olivia during Seasons 1 and 2. Why did you work so hard to convince me that their love was real only to throw it all away? This show has made me feel things that no other show has, and I know that is due to the talent of the lead actors. Kerry Washington and Tony Goldwyn have undeniably the best natural chemistry I’ve ever seen on TV and you can’t manage to write scenes where we can see it?

You tried to keep me on as a viewer, but you failed.