Which is more important – your reputation or your happiness?

In this episode, we see two very different women and the way they react to the possibility of the world knowing the truth about their respective lives. We pick up where we left off last week – Fitz and Mellie are about to give an interview stating that their marriage is just fine and that Fitz isn’t having an affair with Olivia, but they are interrupted by the news of Olivia admitting to the affair. Now what can they do? There seem to be two options – have Fitz and Mellie admit that their marriage is over or cast Olivia as the home-wrecking other woman who tried to get between them.

There was a strong focus on the various relationships throughout the episode and the camera work was interesting, seeming more like a documentary style as it switched back and forth between characters’ faces.

Abby and Olivia: Abby is basically doing Olivia’s job now, spinning things for the press, and she has been having a difficult time with the reporters begging for information about Fitz and Olivia. At the same time, she and Olivia are supposed to be best friends, so not only does she need to do her job, but she wants to protect Olivia. Which is why she is very upset that Olivia lied to her and denied the affair, only to turn around and announce to the world that she is indeed involved with Fitz, thus making Abby look like a fool at her job. In the end, Olivia apologizes to Abby and tells her she is doing her job well – which then gives Abby permission to do what she does at the end of the episode. 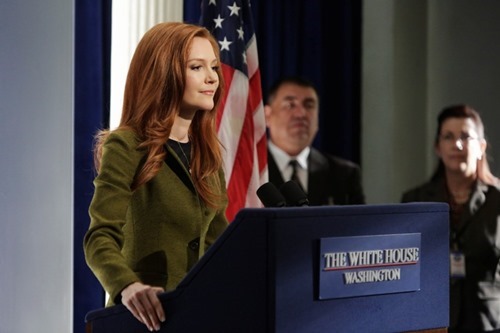 Mellie and Fitz: The episode put a major focus on how Olivia’s admitting her relationship with Fitz effected Mellie. Poor Mellie, who hid her rape from her husband and instead used it to get him into the White House, who grew up wanting to be the First Lady, who hates that role so much that she wants to commit herself to another 4-8 years in the White House prison as President, who makes disparaging remarks about Olivia at every chance she gets… Poor Mellie will not go down easily. So when discussing the option of a sit-down interview in which she and Fitz explain that they are divorcing, she has a list of demands for him in return. The main ones include that Fitz will support her politically and accompany her on her campaign trail and that Olivia will not marry Fitz or even be seen with him until after he is no longer President. Fitz agrees to all of this because he just wants to get it over with, but then Mellie realizes she wants more. She is hurt that it has come down to this and even though she hates being the First Lady so much, she doesn’t want the world to know that Fitz doesn’t love her and that he’s leaving her for Olivia. Fitz comes to Mellie and apologizes for abandoning her (putting aside the fact that she abandoned him emotionally for years and years) and says that she was the one who got him to the Presidency and assures her that she will be the next President. Mellie actually asks Fitz what he has sacrificed for her – what about his happiness? He didn’t even want to be President – she (and his father) was the one who wanted that for him! What about love? Anyway, this conversation almost makes Mellie relent to the interview admitting the divorce, until Cyrus steps in. 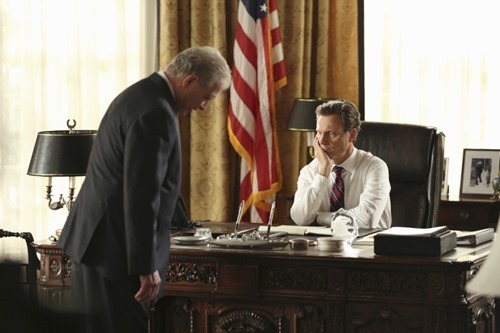 Fitz and Cyrus: Mellie calls Cyrus back to the White House and he does some of the negotiating between her and Fitz. He also negotiates for himself. It is obvious throughout the episode that Fitz is still pissed at Cyrus, and Olivia’s silence in his presence is telling of her feelings for him too. The audience may have forgotten, and Cyrus may try to pretend it didn’t happen, but Fitz is painfully aware that Cyrus worked with Olivia’s father at the end of last season in order to save his own reputation. And Olivia’s father is the man that had Fitz’s son killed. So when Cyrus tells Fitz he has his back, Fitz is justifiably skeptical. He throws Cyrus out, and Cyrus goes right back to Mellie and tells her that Fitz played her; that he said what he said just to get her to cooperate. This in turn causes Mellie to back out on the interview.

Mellie and Olivia: Olivia stood around in the background for a lot of this episode. She pretended to be strong, but Mellie gets to her by telling her all about how awful it is to be First Lady, how nothing matters in the White House aside for the President. This scene made no sense to me. In the agreement that Mellie herself wrote, Olivia would not be moving into the White House or becoming First Lady. So why would it matter that Mellie’s life as First Lady was so awful? Olivia was not going to be in that role! Olivia somehow forgot about that though, and went back to Fitz to say that she couldn’t do it after all, and that he should take Mellie back. She takes a line from Mellie and reminds him that she’d be giving up everything for him. He already knows this of course – he just left her a voicemail in last week’s episode saying that she shouldn’t give up everything for him! 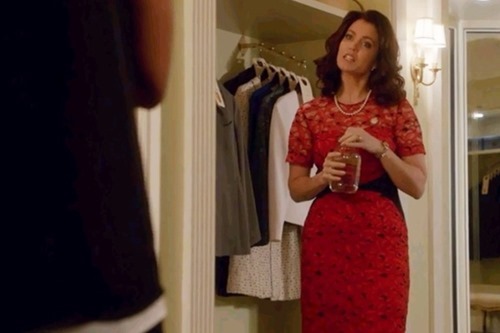 Olivia and Fitz: Finally we come to the central relationship of the show; the one that this episode could have focused on, but instead had Olivia as a quiet background player, advising Fitz and being his partner, but ultimately being shown as less important than Mellie. Olivia was the one that set off this chain of events by admitting her affair with Fitz, and in the beginning we see how happy he is that she did that.

She apologizes to him and he assures her that he loved what she did. When she suggests that one way out of the situation is to show how she is the home-wrecker with a bad reputation, Fitz shuts that down. When Mellie backs out of the interview, Olivia and Abby silently agree that the way to go is in fact that option. When Fitz realizes, he wants to interrupt Abby and stop her from ruining Olivia. Olivia won’t let him though. She allows her reputation to be ruined in exchange for…for what? As she says, she is choosing him. She says this after she told him she was done and couldn’t go through with it – so I have to wonder what changed her mind! In episode 2×20, Mellie was about to go on national TV and declare that Fitz was cheating on her. Instead of stopping her, Fitz went to Olivia and sat with her as the time ran out, thus choosing her over Mellie.

In this reversal, Olivia allows herself to be defamed so that Fitz is not. Because I think another option would have been for him to do the interview alone and maybe they were worried that this would make the American people view Fitz as an awful husband and person. Also, by having the White House put out this damning information about Olivia, Mellie and Cyrus can no longer use it against her.

With Olivia under the bus, she and Fitz sit back together in the Oval and basically watch the world go up in flames around them. The news about Olivia is so important to the American people that the news of the Louvre being on fire is merely a headline that runs across the bottom of the TV. Literally – Paris is burning. Who cares? Jake does. Apparently it’s a big deal to him and to Olivia’s father. Will this become important in future episodes? Probably. But for now, I don’t care! I do care about Olivia though, and watching her name be trampled was difficult to watch, so I’m sure it will be awful for her. Hopefully, soon she will get her voice back and be able to stand up for herself. For now, if you watched this episode, what did you think?