After last week Scandal tried to drum up interest in the show by stressing the fact that Lena Dunham would be guest starring, they actually received their lowest ratings of the season for that episode (and for this week, the ratings were even a little lower). So, in order to try a new tactic, they appealed to people who have been watching this show for a long time and had questions, like myself. They told us they were going to explain the story behind Olivia’s ring. I briefly touched upon the ring here, but in order for today’s post to make sense, I have to start at the beginning.

When I first watched the show, there were a few things I wanted to know more about, one of which happened in the very first episode. That episode title was “Sweet Baby” and it was called that because when Amanda Tanner told Olivia that Fitz had called her “sweet baby,” Olivia realized that Amanda was telling the truth – because she had personally heard this phrase from Fitz before. However, as viewers, we never saw him use that phrase and to me, it didn’t feel like it fit.

I can’t say that the ring itself was a question for me, but while googling something else, I came across some information on the ring that Olivia wears. Starting in Season 1, Olivia always had on the ring, aside from in flashbacks. Kerry Washington tweeted the following on August 16, 2013: 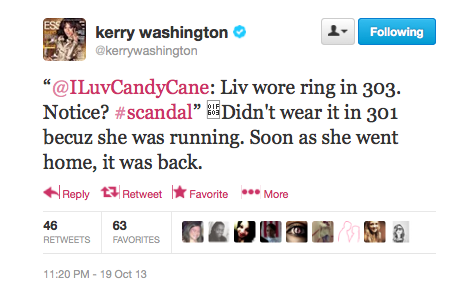 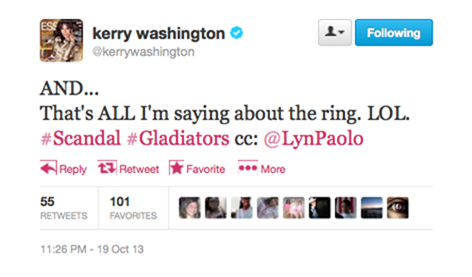 However, on December 16, 2013, when asked about it, Shonda Rhimes replied: 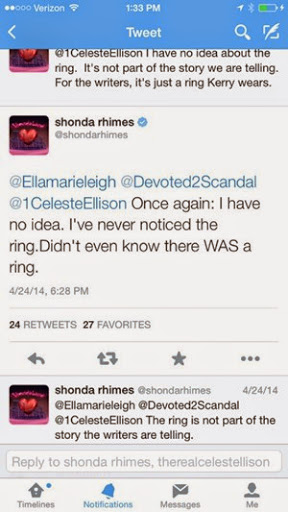 However, Lyn Paolo, the costume designer, said in an article originally published on November 14, 2013 (BEFORE Shonda said it’s just jewelry):

“She wears [a Monique Pean] ring all the time. We bought it for the pilot and joked that there had to be a backstory for it,” says Paolo, who hints that series creator Shonda Rhimes ran with the idea and worked the ring into the plot. “We are very conscious that she does not wear the ring in flashbacks. She only wears it in the present time.”

On November 3, 2014, Kerry herself was quoted saying that she had her own story for the ring:

“I have a beautiful Monique Péan ring that I’ve worn since season one, and it’s funny because the fans are always wondering what the significance is behind that ring,” said Washington. “I know what the backstory is, and I’ve shared it with Shonda, but we’ve never talked about it on the show. It’s a bit of a mystery, and that’s kind of fun.”

So basically, Shonda rudely denied that she even knew about the ring when in fact, both Lyn and Kerry said they had told her about it and their ideas for it. This always bothered me. Now, you already know that a few weeks back it was revealed that Olivia never takes off the ring and that she wears the ring for Fitz. And you already know (because I’ve shared it over and over) that both Tony Goldwyn and Kerry Washington responded to my tweet asking if Fitz gave Olivia the ring: 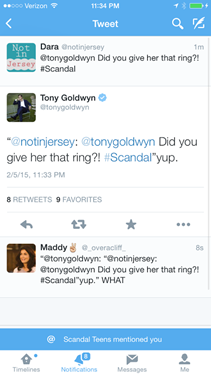 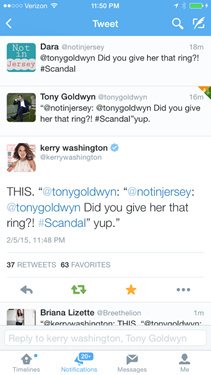 At that point, we realized that the ring had a story. Then, Olivia was shown throwing the ring at Fitz out of anger, and she had not been wearing it since she took it off during her kidnapping (she left it behind as a clue to help her friends find it). Now, we’re up to this episode. The episode began by showing us that Olivia is still having nightmares related to her kidnapping. Interspersed with those, she has flashbacks to various moments with Fitz, starting when she met him and up until she threw the ring at him. The episode was also focused on Cyrus and his past marriages – first to a woman and then to James, the true love of his life. James and Cyrus were married after Olivia left the White House during the beginning of Fitz’s first Presidency, but before the events of the beginning of the series. Which is why Olivia never had the ring in earlier flashbacks that took place before this one. In this flashback, we see Fitz giving Olivia the ring. Not only that, but they are in Vermont, and he is wearing his Navy sweatshirt. As seen above, Shonda told us there was a story behind the sweatshirt (the same one that Olivia picked up and cried into after Fitz had been shot).

Fitz: “It’s a ring. Very old, rare, one of a kind. It even has a name, doux bébé. It was my great grandmothers. Her father bought it for her at auction in Paris, she wore it at her Debutante Ball and I was supposed to give it to my wife but I didn’t. It just… never felt right so I kept it and now I know why, because I was supposed to give it to you.”

Fitz: “You can call it whatever you want. In English, doux bébé means ‘sweet baby’ so –“

Olivia: “You want me to call a ring ‘sweet baby’?

Olivia (after kissing him): “I could never hate you.”

That’s right – we also got the meaning behind “Sweet Baby.” Everything was thrown all at once – even the song playing in the background was The Light, the Olivia and Fitz song that plays during their most intense and meaningful moments. Later in the episode, Olivia goes to Fitz for help and he notices she is not wearing the ring. However, she has another dream and ends up searching for her discarded ring, and by the end of the episode, at Cyrus’s wedding to newest husband Michael, she is wearing it again.

[source (for the two above as well)]

Getting back to Shonda, during the episode, she tweeted: 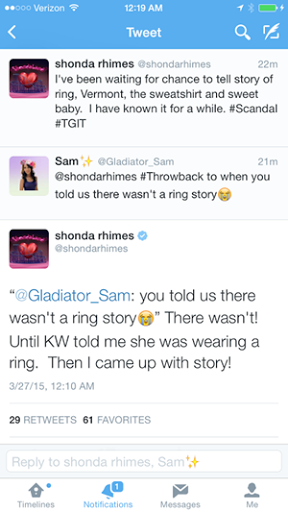 I decided to get involved: 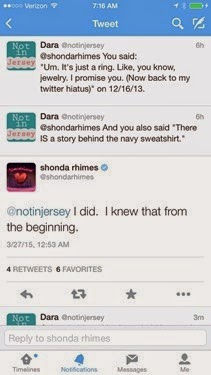 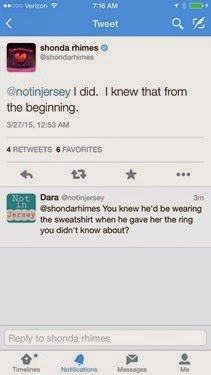 Really though? How could she have had a Navy sweatshirt story if he was supposed to be wearing it while giving Olivia a ring that Shonda never knew about? This interaction has almost taken away from my enjoyment of actually getting a back story for something I’ve been wondering about for over a year! Now that I’ve gotten it off my chest though, let’s look at this ring for a moment. To Fitz, Olivia wearing the ring means that she’s okay, she exists in his world. To her, it keeps her connected to him. She knows how he feels about it and she knows that seeing her with it on means something to him. Through everything, she’s never stopped wearing it. At this point in their (very messed up) relationship, Fitz is letting her be, not arguing with her, even complimenting her on how she went around him to plan Cyrus’s wedding with Mellie. With the space he gave her, she was able to put that ring back on. Olivia and Fitz obviously belong together. Now, I want to see them get there. We got the back stories, now give us our Presidential divorce!!

FYI: There will be no Scandal Sunday post next Sunday due to the Passover holiday. I have yet to decide whether I will post about next week’s episode either before or after the holiday, if at all.