Olivia gets kidnapped? Predicted it. Olivia chooses herself? Expected it. Olivia acting like a crazy person and nearly breaking down? That’s been a long time coming. It remains to be seen how she will handle the kidnapping. But for now, let’s discuss the love triangles. Or parallelograms, or whatever they are. 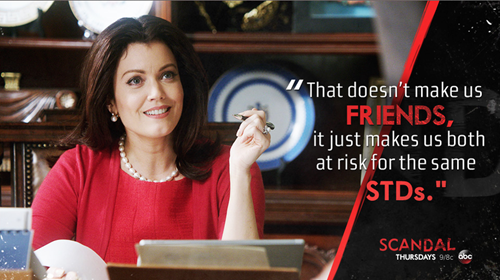 First up, Andrew the VP is sleeping with Elizabeth the head of the Republican party – but she is divorced, so there’s that. He also sleeps with Mellie, the First Lady, who is married to the President, although likely not sleeping with him. Abby, the Press Secretary, slept with Leo Bergen and has to confide this as her alibi to her ex, David Rosen the Attorney General, when he questions her about her knowledge of Cyrus’s relationship with Michael. While Cyrus has been caught sleeping with Michael, he is still in part committed to his dead husband, James (the former Press Secretary). In the end, he agrees to marry Michael to clear up that scandal, but to me, that counts as a love triangle too. Quinn is sort of with Huck, but she also sleeps with Charlie. Is that everyone? Oh. Right. Olivia is still apparently torn between Fitz (who is of course still married) and Jake. First, she tells Jake that the sun has set so they’re not running away again. Then, after she goes crazy from verbal lashings from both of her parents and realizing Abby has taken her place in the White House bubble, Jake says he loves her and I was sure she’d say she loves him too. Instead, she says “I want Vermont with Fitz. And I want the sun with you. I’m not choosing Jake or Fitz, I’m choosing me.” 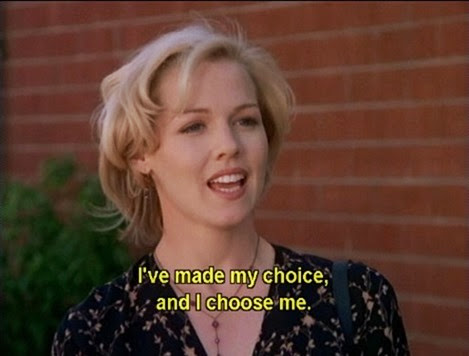 That’s not Olivia! That’s Kelly Taylor! She said it first!!

Joking aside, the culmination and reveal of the plan that Elizabeth and Andrew have been working on was pretty interesting. Apparently, they want Fitz to declare war on West Angola and they tried to get him to do so by rigging the bomb on the Vice President’s car. That didn’t work, so instead, they are kidnapping Olivia – the one thing that Fitz can’t live without. My actual prediction was that something would happen to Olivia and Fitz wouldn’t believe it, because she has left him so many times that he would just think she ran away again. Instead, Andrew sat in the Oval with him and told him the deal.

The season started with the tag line “Where is Olivia Pope?” based on her disappearance with Jake to a tropical island. Now, they can re-use this line for the second half of the season, as Olivia is once again missing, this time not of her own volition. I wonder how long it will take to resolve this one!

Next week in this space, Sunday Funnies resumes, and it will continue at least until the end of January!