My reaction at the end of this episode was “What just happened?” And from my twitter feed, it looked like I wasn’t the only one. The show started with Fitz, Olivia, and Jake in the bunker. They eventually bring in David Rosen and all four work together on a plan to bring down Papa Pope. I’m not sure if we were supposed to actually believe that Olivia would go crying to her father, but we were definitely supposed to believe that HE believed she needed him and therefore showed up to dinner, which was in fact a set up. However, somehow he knew about the plan and not only made all the B613 files blank, but killed all of the snipers who were set to capture him.

On the one hand, I can hardly believe that the writers would make Jake the one who told Papa Pope the plan, because all they have been doing since he came onto the show is to build him up and try to make him the fan favorite. On the other, it wouldn’t be Scandal without a crazy twist. So once everyone believes Jake is an innocent man, it turns out he actually is working with Papa Pope still? I am really not sure. What is interesting though is that Fitz still understands that Papa Pope is Olivia’s father and that this may be difficult for her. Jake, on the other hand, claims to want to kill him with no regards towards Olivia’s feelings on the matter. 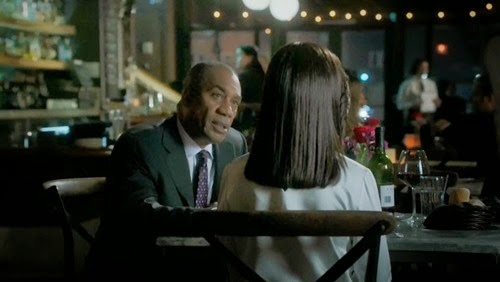 In the dinner meeting between Olivia and her father (The Last Supper), Olivia looks terrified and before it was revealed that Papa Pope knew the whole plan, I almost thought Olivia would call it off – he is her father after all. He keeps trying to tell her that neither Jake nor Fitz will be there for her in the end and that he is her family, that he has been doing everything for her all along. I don’t believe it though – he abandoned her when she was 12 for her own good? Not to mention killing the President’s son. That was for her benefit?

And then there’s the whole thing with Cyrus and Michael. Michael apparently had a lot on Cyrus but only told Elizabeth harmless details, proving that he actually cares about Cyrus. Michael also was the source of the info on Elizabeth’s secret apartment where she’s meeting with Kubiak and the Vice-President. Now we know that Kubiak (now dead) was working with Elizabeth, who is either having an affair with the Vice-President and he is in on it too – or he’s actually not in on it but is working against her – who knows. The sad part of the VP thing is that he supposedly loves Mellie and then he starts making out with Liz. Is no one on this show real? The only person who is honest with how he feels and who he loves is Fitz! So how does the stalking and hundreds of photos of Olivia fit in?

Also going on is the side plot of Huck and his son, who witnesses Huck killing Kubiak. It was out of self-defense, but obviously that’s gotta have an effect on a kid.

Next week is the winter finale and I wonder if I’ll finish it with anything clarified or more confused than before! I wonder if anyone else thinks so much about TV show plots. Ha.