In the world of Scandal, pretty much every politician is dirty, via violence, sexual conduct, or probably both. The title of this episode, Baby Made A Mess, referred to yet another sex tape scandal in which a Senator was shown partying it up dressed as an adult baby and claiming to have made a mess in his diaper. Because of this mess, a new Senator needed to be chosen and Fitz had decided to endorse Charles Putney, Abby’s abusive ex-husband. 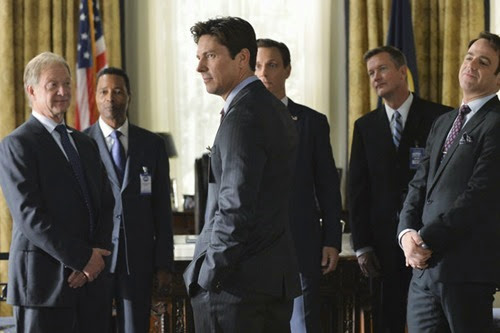 Abby reacts as a woman who has been abused should react and freaks out. Olivia steps in and encourages Abby to speak out – whether directly to the president or from her podium as Press Secretary, but Abby doesn’t like these ideas, so Olivia decides she’ll make the other candidate win – smart idea! This would have worked out, but it turns out that the candidate, Susan, was never married to her child’s father who has since passed away, and Leo, who is working with Charles, tells Abby that Republicans won’t vote for her for that reason. Abby confides in him about Charles and he manages to have it leaked that Charles was behind the adult baby Senator’s sex tape leak, thereby ruining his chance at election. Then Leo kisses Abby. These two have been flirting since last season when she was still dating David. Now she’s not though, and I like her with Leo.

There was a slightly interesting twist to the Cyrus situation when he came to believe that Elizabeth was in cahoots with Michael and spilling secrets to the press. Cyrus was smart and told Michael a key point that was incorrect, and therefore if it was leaked, it would be obvious who it came from. However, Michael tells Liz who told Mellie the info and Mellie is the one who leaks it. I wonder if Cyrus will think Michael went directly to Mellie and that Liz wasn’t involved. In any case, Liz and Mellie are definitely causing issues for Fitz.

Quinn is still working on figuring out what the deal is with whoever has been stalking Olivia and she confronts the father of the girl who was killed over the photos. He tells her that she can’t stop what’s coming and then kills himself. I’m very nervous for Olivia about whatever this means. At first, Quinn and Huck decide not to tell Olivia about the photos, but then they do and she barely reacts – just to ask why they didn’t tell her earlier. 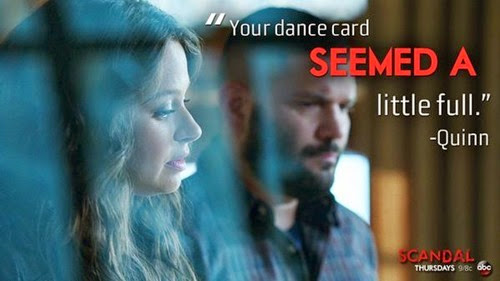 Huck is still playing video games with his son and he almost goes to meet him in person but walks away. Later though, Javi uses his computer skills to track Huck and shows up looking to find out why Huck left his family. “Why did you leave” is a question asked twice in the episode – from Javi to Huck and from Tom to Olivia. In what was most likely the best scene of the episode, Olivia meets with Tom to question him in person about who gave him the order to kill the President’s son and he reveals his true feelings about Fitz and therefore about Olivia.

Even after telling her all of this though, Tom still stands by his story that Jake ordered him to kill Jerry. Olivia still doesn’t believe it, so she arranges Tom to be attacked in prison, for him to think that Command (Olivia’s father) was out to kill him, and this makes him ultimately confess that it was Papa Pope behind the murder all along. And with that confession on tape, Olivia finally convinces Fitz of the truth. The thing is that Papa Pope knows about Olivia meeting with Tom, and if he finds out about the attack, he’ll know that he wasn’t the one behind it and that therefore she was! Olivia is putting herself in a risky situation.

Next week, Fitz, Olivia, and Jake are going to work together to bring down Command. I’m definitely interested to see how that plays out – having the three of them together is bound to get awkward! I really liked this week’s episode and I hope the flow keeps going into next week’s!

If you watched, what did you think?

The below includes affiliate links. If you click on a link and make a purchase I will receive compensation. 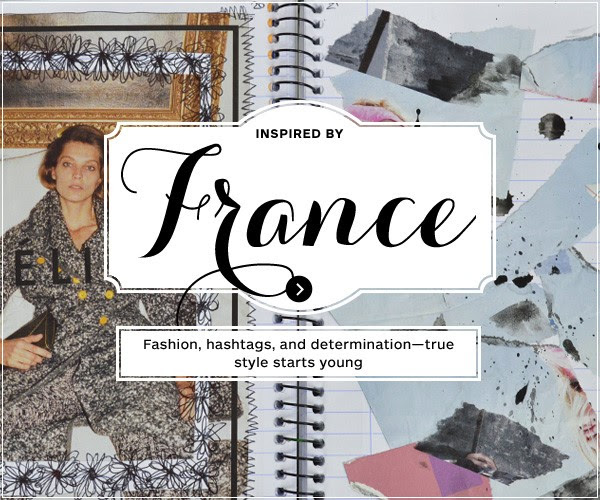 When we think of France we think of taste, elegance, and style. Some of the greatest art, design, and fashion in the world has a French accent. That’s why we turned to France to see what the next generation of creative genius will look like. Meet Tolly Dolly—a fashion blogger with big ambitions and an impressive resume of brand partnerships and press coverage. Her goal is simple—to be a fashion designer. She already has her first design contract—all this and she’s just 14. Here we talk inspirations, ambitions, and all things festive.

Ready to start publishing your own book? 15% off any order (no minimum spend required), which is great news if you’re planning to make a holiday gift. This deal ends November 25th.