Olivia Pope uses people. And in this episode she was clearly used. How does it feel Olivia? The “Innocent Man” of the title of this episode was Sheldon from Private Practice (Brian Benben) playing a man who claimed to be innocent of an assassination attempt on the life of a previous president. He claimed that he could be proven innocent if the bullet was removed from the past-president’s brain, where it remained lodged ever since the shooting. By claiming that the bullet’s presence actually caused him the stroke which he just died from, Sheldon can now be tried for murder, and therefore proven innocent if the bullet was not from his gun. But in the end, it was from his gun after all. He used Olivia to prove himself guilty and gain the fame he wanted when he tried to kill the president in the first place. 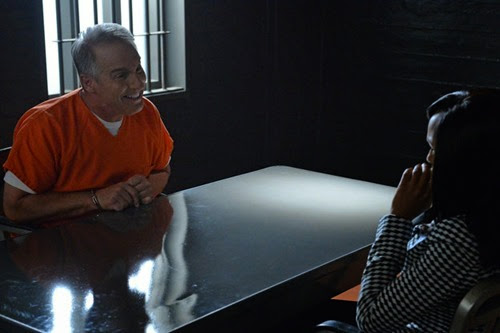 Olivia screams at Sheldon (yes I know he was not named Sheldon in this episode…) and runs from the room. At the same time, she clearly used people in this episode to get what she wanted, just as Sheldon did to her. Of course, she isn’t the only one. Everyone uses each other to get what they want and it can be disconcerting, because it is difficult to tell who is real and who is just doing what they feel they need to do.

In the pivotal Fitz and Olivia moment in this episode, Fitz tells Olivia that they are beyond repair, that there is no chance for them. Olivia fires it back at him, saying that if he turns Jake over to her father, there is no hope for them at all, ever. Fitz reacts to this, because if she’s saying there’s no hope if he gives Jake to her father, that must mean there is hope now. Olivia then claims that there is. Giving hope to Fitz is like giving him life. And he moves Jake out of the Pentagon as a gift to the woman they both love. 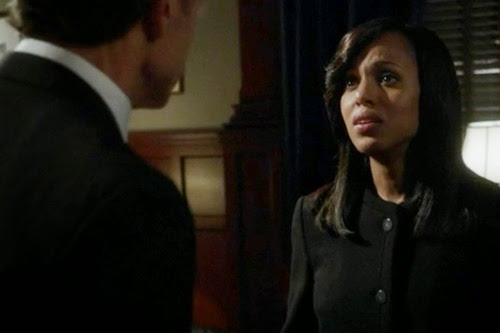 However! Olivia’s father wanted to kill Jake. He manipulated Fitz into letting Olivia see Jake and then he was extremely upset with Olivia that Fitz took Jake away from him (I guess he thought Fitz would definitely hand Jake over after seeing Jake and Olivia together?). Olivia tells her father that she saved both Jake and Fitz by using weapons he would never possess – meaning her sexuality. Meaning the fact that Fitz is in love with her. She used Fitz’s love to save Jake.

I feel bad for Fitz and I’m upset with Olivia. I recall a year ago when I became obsessed with Scandal after binge watching from the beginning that there were times when I hated a character and then loved him again in the next episode. Shona Rhimes seems to change people’s views of her characters by making them human again and worthy of empathy as time goes on. So I’m waiting for Olivia to be human again. I also wonder if there’s any way Jake actually was involved. Because he is currently in the position where people feel badly for him and care about him, but this could be changed in the next episode. And while Olivia believes Jake is innocent (and that she knows him as well as she knows Fitz) she also believed Sheldon from Private Practice was innocent – and he wasn’t.

Speaking of Olivia, Quinn found the locker that the key opened – the key that she dug out of a dead girl in last week’s episode. Basically, two girls were killed over this key, and when Quinn found the locker she discovered hundreds of pictures of Olivia inside! Someone has been stalking her and someone wants those photos so much that they killed people to get the locker key back. I’m thinking it’s not Jake, Fitz, or Papa Pope behind the photos. Someone on twitter suggested that it could be Abby’s ex-husband who will be in next week’s episode. But it could also be connected to Portia de Rossi’s character Elizabeth, who is trying to bring down the White House and is most likely working with someone who knows about Olivia and Fitz (maybe Andrew?). 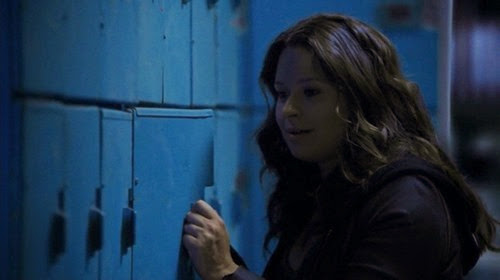 In other news, I was wrong last week when I felt like maybe something had happened to Huck’s son Javi. He is alive and well and playing video games with Huck, even though he thinks he’s playing with another kid. And also, Mellie is back. She bonded this week with the former president’s wife and this former First Lady claims that it was actually her who ran the country while her husband was president – while he was sleeping around with multiple people. She tells Mellie that she’d be remembered as the wife of a man who made something of his life. Mellie seems to realize that she should make something of herself. Maybe she can leave Fitz and make her own political career now that she realizes this? Apparently there are three more episodes until the winter finale. Seriously. Nine episodes in the first half of the season – if it’s a normal length season there are 22 total episodes which means there are still 13 left for the second half, which seems a little uneven! It’s the same schedule for Grey’s Anatomy by the way, which is even stranger because it wasn’t on this week and the network gave them an extra episode, so their winter finale will be after only 8 episodes with 15 to go! I wonder how long the mid-season breaks will be!