This week’s episode was part two of last week’s episode and it was added at the last minute. I’m assuming there were too many things going on that they didn’t want to cut out, and therefore they added more to make another episode instead of removing things instead. The problem resulted in some mixed up scenes that normal viewers may not have noticed – like the fact that when it’s clearly a day later, Olivia is re-dressed in the same outfit. And there is a scene where it is morning, followed by a scene where it is the night before again. These things don’t really matter. What did matter in this episode?

The Key – The title plot of the episode returned to Olivia’s law school friend, Penny from Lost (aka Catherine). When her daughter was killed, it was by the head of her husband’s security team, and the reason was that he wanted a key that she had. She actually gave the key to her friend Faith, and Olivia and Quinn witness him killing Faith as well. After thinking hard about it, Quinn realizes that Faith swallowed the key and she goes and cuts the key out of Faith’s body. What we don’t discover is what the key was for.

Huck – distracted by stalking his former family, Huck isn’t around when Quinn needs some security equipment that in fact he is using for his spying. Eventually, his wife Astrid from Fringe (aka Kim) agrees that she will let Huck see his son, Javi. Huck comes to the house with a present for Javi, but instead Astrid from Fringe confronts him with a doctor. She thinks he needs help as she doesn’t believe his story about the spy agency that was threatening to kill his family. The scene made me question whether something had happened to Javi. During all the times that Huck has spent watching Astrid from Fringe he hasn’t seen his son? 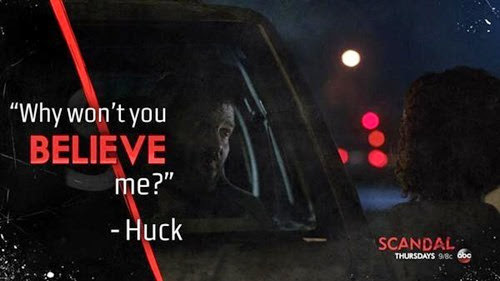 Cyrus – Olivia is freaking out that she doesn’t know where her “boyfriend” is. Cyrus finally throws her a bone and lets her know that he is accused of having killed Jerry and Harrison. While he actually did not kill them, Cyrus reminds Olivia that Jake did kill James. And that Olivia is ignoring that fact.

Mellie – After Fitz asks her why she is still hanging around the White House doing nothing, she tells him she’s there because Jerry is there. Now that he’s no longer in boarding school, she can visit him every day at 2:30. His grave, that is. But Fitz doesn’t show up for their regular 2:30 grave visit and Mellie assumes he is with Olivia. Instead, Fitz was trying to get a confession out of Jake. He tells Mellie that their son was murdered and she has an epiphany that Jerry died for a reason – to keep Fitz and therefore herself in the White House. Mellie sheds her robe and Uggs and gets in the shower – apparently she’s on her way back.

Papa Pope – When Olivia confronts her father, stating that he was the one behind Jerry and Harrison dying, he manages to shed doubt on her theory by explaining why Jake would have done such a thing and why he hadn’t told her the truth – because he wanted her to be happy. Olivia doesn’t know who to believe, and she has a break down in front of Abby, who has come to accuse her of ruining yet another person in her life – David Rosen. The truth is, whether it’s due to her own actions or that of her father’s, Olivia really has ruined everyone who is in her life. And it’s too much even for her to take. 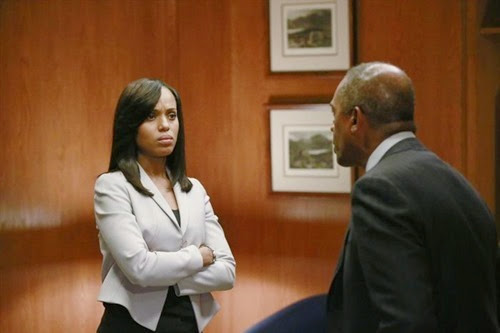 Fitz – Holding in his grief has apparently gotten to him. After telling Mellie to never mention his son to him again, he returns to the interrogation room where Jake taunts him about Olivia and he lets lose, beating Jake with his own presidential hands. Even though Jake tried to explain what actually happened, Fitz either believes that Jake is guilty, or as Jake suggests, he wants him to be guilty so he can hate him for a reason that is allowable and not just for sleeping with Olivia. Jake also claims that he is a good guy and that is why Olivia loves him, just like she loves Fitz. Except that Olivia could never love Jake like she loves Fitz, and Jake is not a good guy. 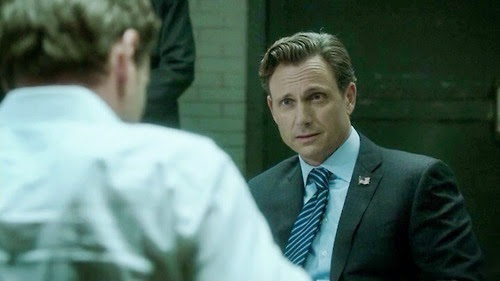 Next week’s episode is called “An Innocent Man” (excellent Billy Joel song, by the way) and while the story line introduces a man in prison who claims to be innocent, I’m sure the title refers to Jake as well. Because as much as Fitz wants to believe it and as much as Papa Pope tries to convince Olivia of it, Jake is actually not guilty of killing the President’s son.

I wonder which is better for Olivia – having the person who murdered her best friend and her lover’s son be her new boyfriend or having that person be her father?