Even though I honestly felt like giving up Scandal after last week, I watched again this week and luckily I liked this episode better. Olivia Pope is working again, fixing things other than herself, and doing what she needs to do. There were themes in this episode that got me thinking, which is a good thing – marriage, loss, and gun control being the main storylines. 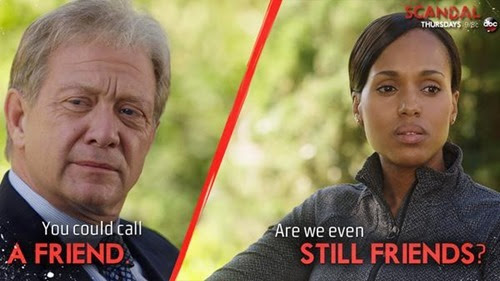 Cyrus somehow blackmails Olivia into helping the White House get a couple who is the face of the gun control issue to the State of the Union speech. He threatened that he would tell the president that Olivia calls every day, pining for him. However, this was right after Cyrus said Olivia hadn’t called at all, so it looks like he was threatening to lie. It works though, and Olivia flies to New Mexico to meet James and Lisa Elliot, a couple who is supposedly perfect, but actually can’t stop fighting. She evens sprays a fire extinguisher at him! Olivia promises that she can get them the divorce that they desperately want, but meanwhile gets them to show up at the State of the Union. They are there because Lisa was shot in a school shooting while saving kids. Gun control is apparently a Democrat platform, and Fitz is Republican. I find myself confused that Democrats are usually pro-individual rights and freedoms, and yet they don’t support the right to bear arms. The State of the Union address focused on the fact that while Jerry’s death was an “accident,” deaths from guns can be prevented. President Grant pulled it off, with the help of Olivia, who watched the speech in the background – trying to break away from Fitz isn’t as easy as she pretends it is. 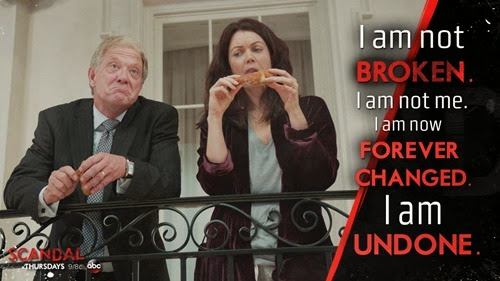 Cyrus and Mellie discuss the difference between losing the love of one’s life and losing a child. Cyrus feels that they are the same. Cyrus, however, keeps working and doesn’t break down, unlike Mellie, who is caught on camera in her bathrobe sitting on Jerry’s grave. Mellie is the mourning mother and I think she portrays it appropriately, but in the past, Mellie spoke about not even wanting to be a mom in the first place. I imagine part of her mourning is due to the guilt of her lack of mothering to Jerry when he was alive. Mellie doesn’t want to go to the State of the Union, claiming she can’t smile for the cameras and support her husband. Abby, who has taken over Olivia’s role in the White House, convinces her by explaining that she is the face of mourning parents, most of whom have to return to work after a lose like the one Mellie suffered, and by comparing her to Jackie Kennedy who was next to her husband when he was shot and killed but then stood up at LBJ’s swearing in as president with a brave smile. (What she neglects to bring up is that Fitz was shot with Mellie next to him too! What about that?) Mellie pulls it off, but collapses afterwards, after kicking off her heels and ripping off her pearls. I think Mellie needs help. And maybe a divorce. 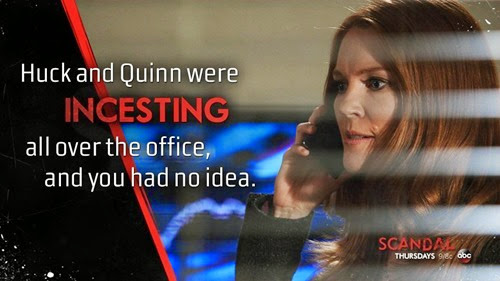 As far as the other states of the unions, Huck and Quinn are still a mess. Abby and David are broken up, but she still tries to help him get his Attorney General nomination. Olivia is using Jake for sex. Jake meanwhile is researching Harrison’s death and seems to have figured out that Olivia’s father was responsible. The problem I’m having with Jake right now is that he has the capacity to realize that Tom had a part in Jerry’s death (and Harrison’s as well) because having been in charge of B613, he knows that Tom is not loyal. I’m interested in seeing all of this come to light.

So, if you watched, what are your thoughts? Do you think our country needs stronger gun control laws? Does anyone else want to vote for Fitzgerald Grant as our next president?