Since my last update, I finished one book. 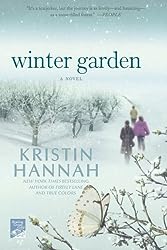 When I first read books by Kristin Hannah, it was recommended to me that I should read Winter Garden. Strangely enough, I didn’t love it as much as I’ve loved her other books. “Meredith and Nina Whitson are as different as sisters can be. One stayed at home to raise her children and manage the family apple orchard; the other followed a dream and traveled the world to become a famous photojournalist. But when their beloved father falls ill, Meredith and Nina find themselves together again, standing alongside their cold, disapproving mother, Anya, who even now, offers no comfort to her daughters. As children, the only connection between them was the Russian fairy tale Anya sometimes told the girls at night. On his deathbed, their father extracts a promise from the women in his life: the fairy tale will be told one last time—and all the way to the end. Thus begins an unexpected journey into the truth of Anya’s life in war-torn Leningrad, more than five decades ago. Alternating between the past and present, Meredith and Nina will finally hear the singular, harrowing story of their mother’s life, and what they learn is a secret so terrible and terrifying that it will shake the very foundation of their family and change who they believe they are.” I felt like a good portion of the book passed by before we began to learn about Anya’s life. I think that the interwoven stories in this book could have been written alongside one another, rather than all of the Leningrad story being told in the 2nd half of the book. The way the book combines the past and present through the use of a fairy tale reminded me of Jodi Picoult’s book, The Storyteller. As you know, I’m a huge Jodi Picoult fan and I liked the way The Storyteller was written better than the way this book was. On the other hand, the situation in Leningrad described in this book is not something I ever knew about before and it was interesting to learn about. It was also interesting to realize why Anya was the way she was based on the things that happened in her past.

Have you read anything fun lately?