I’ve been a member at my current gym for 2.5 years now and I’ve been attending the same Monday night exercise class that whole time. I happen to love group classes, because when I go to the gym when there is no class, I end up on the treadmill for half and hour and then I call it a day. In a class, the instructor keeps me going for a whole hour and the workout is hard – although at times I feel like instructors just enjoy torturing us, so they make up the craziest things they can to get through the hour class! For awhile, there was also a class on Wednesday nights at my gym, but it got canceled. And just recently, a new class started up. The people who have been attending the class have been annoying me greatly. So I thought I’d write a little blog post about the people you meet in group exercise classes. 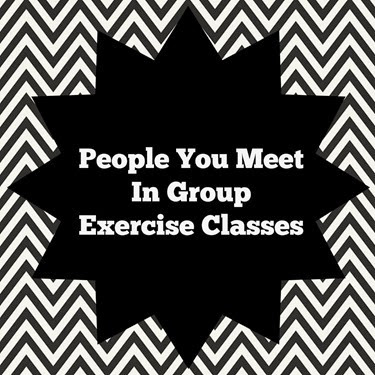 1. The lady who sings along with the music. Um, it’s bad enough when the instructor sings along. I don’t want to hear you!

2. The person who does more than required. If the instructor has to adjust the music or leaves the room for a second, some people stand around. Other people do jumping jacks. Too. Much. Energy!

4. The ones in perfect shape who make you wonder why they’re even there.

5. The ones who show off by running at their top speed or picking the heaviest weight to use. We all know you’re stronger than us!

6. Husband / Wife work out buddies. Aww. Even better – mother / father / daughter buddies. Actually I’m being honest here – my mom and I went to an aerobics class together when I was in 7th grade, and it was a ton of fun.

7. The person next to me who looks at me to see how to do the exercise. Um, I’m so not the person to watch! I’m most likely doing it wrong.

8. The newbies. There are some regulars who have been there since I joined, but usually there are new people trying out the class. Sometimes they do it with difficulty, sometimes they are just fine. I want to tell them not to be scared, but my Monday night instructor is definitely scary!

9. The instructor’s best friends. You know, his favorite students. The ones who do everything right. I’ll never be one of those. I’m the one the instructor feels badly for.

10. The kind people. I remember on my first day of class when I felt like I was going to die, a nice man told me to hang in there. That he was like that too. That it would eventually get better. He might not have been right about it getting better (it’s still hard), but he was kind. I’ve tried to pass it on to new people whenever possible!

Do you go to group exercise classes?